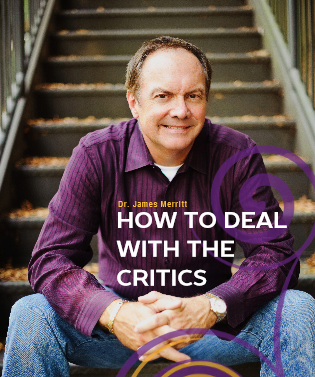 One of the most difficult aspects of pastoring is the fact that you will never get rid of critics. Regardless of where you pastor, who you pastor, or how long you pastor, criticism is inevitable. The temptation will always be to react to critics instead of responding to critics when necessary. As a pastor and leader, you must become skilled in handling critics, so that they don’t end up handling you. Indeed, over every criticism should be this label: Handle with care.

Moses miraculously led his people across the Red Sea, the storm clouds . The Shur and wandered three days, looking for water. When they finally reached the oasis known as “Marah”– just when the people thought they would die of thirst– they found that the water was bitter and undrinkable. The Israelites immediately became upset with Moses and asked, “What are we supposed to drink?” They should have remembered that every difficulty is an opportunity to see the hand of God move; instead, they complained.

, circumstances will be bitter. Such and your followers are made of. Up until Marah, the and drinking sweet water. There was a time when God fed them , parted the Red Sea, and . God had handed them everything on a silver platter and they had eaten it with a silver spoon. But experiencing a bitter situation and suddenly they went from gratitude to grumbling. They had forgotten that with difficulty.

of critics. As a pastor and leader, the critics come out in full force. of leadership, and we must face the reality that they will arise. Jesus said in John 16:33, “ I you, peace. In the world you will have but be of good cheer, I have overcome the world.” Paul said in 2 Timothy 3:12, “Yes, and all who desire to live godly in Christ Jesus will suffer persecution.” The brutal truth for leaders is that you will face bitter moments. . . and you will encounter critics during these times. Never mistake the bitter moments or the criticism you experience as proof that God has forsaken you. Bitter you to further place your trust in God and depend on His guidance to handle the critics. God is using and your faithfulness.

Bitter moments are part of the experience of leadership, and we must face the reality that they will arise.

When bitter moments arise and the critics show up, one of two things is going to happen. You will either get better as a leader and trust in God or you will become as bitter as the critics. God will test you and those you lead to see if you are truly ready for all that He has promised you. The people who were with Moses had failed the test miserably, but Moses rose to the occasion and proved his ability to lead.

The – faithfulness cynicism. Notice that they harshly criticized Moses. In just three days he had gone from hero ( across the Red Sea) to a zero (for leading them to bitter water). I have served as a pastor for quite some time now and I have learned that no matter the successes you have experienced, your critics will whenever they perceive failure on your part. All they will see is what they think you have done wrong.

I I second little country church while I . Some seminary with their pickup trucks and helped load our furniture and moved my wife and to our new church home. One of the deacons came up to me that very first Sunday and said, “Pastor, I didn’t come to help you move in, but you can make sure that I will be there to help you move out.” There are people like that in every church. That is why it is so remember . earth to please people; we’re put on earth to please God. If they criticized Jesus, they’re going to criticize you and me.

Never internalize criticism, because criticism of a leader is often criticism of the Lord. Moses had led the people to Marah, but God had led Moses. That’s why Moses said in chapter 16, verse 8, “Your murmurings are not against us, but against the Lord.” Whenever people complain about their circumstances, they are really complaining about the Lord who led them into those circumstances. The real problem plaguing these people was not drought, it was doubt. The real threat was not a lack of water; it was a lack of faith.

Moses shows us how to respond to critics. Verse 25 says, “So he cried out to the Lord.” The first thing Moses did was to pray. Great leaders understand that responding to critics is a fruitless venture, but praying to God brings about the answers you need. Every Pastor and leader should keep a sign over the door of his heart that reads, In case of an emergency—pray! Too often prayer is our last resort, rather than our first option. It was not until Moses prayed about the problem that God showed him the solution. You will discover in life that many times the only place you will ever be able to find a solution to a problem or a comfort for a hurt is on your knees behind closed doors.

After Marah, to do in order to solve that bitter situation. Verse 25 the Lord showed Moses a tree, and he threw it into the water. After he did, the water became sweet. The tree was there all the time, but Moses didn’t Lord. the tree was hidden; Moses just had to put his focus on the Lord. Moses’ his ability to seek God and see God’s plan even when the critics raised their voices.

It is interesting to note that after Moses prayed, we no longer hear anything from the critics during Mara. Israelites stopped complaining? Had the critics all gone home? Absolutely not. But when leaders focus on God’s voice, the critics’ into the background ineffective. The truth is that you , their voices and disconnect from their influence when you focus on God.

, obedience. . faith for Moses to do since was not rational or scientific. Yet Moses was willing , result, he solved the bitter situation. There will be times when God clearly shows you what to do in order . Others may not understand the solution, but if God said it – do it in faith!

In my years as a pastor, I have . Many times, God’s solution went , but I learned to trust and obey . Have I percent of the time? Absolutely not, but when I trust God, in faith, He rewards my faithfulness and fulfills His word. Never let the critics become water on the fire of your faith. Rather, let God use faith. For them it is “drought and doubt,” but for it is “trust or bust!”

James Merritt is the Lead Pastor of Cross Pointe Church. He was Oakwood, life to Christ as a 9-year-old boy. At age 21, he committed to full-time Christian and went on to pastor five churches. He has preached around the world radio.

A popular Bible teacher and respected voice of the Christian faith, James has been interviewed by media outlets including 60 Minutes, The New York Times, ABC World News Tonight, Time Magazine, and Hannity and Colmes. Each week, Merritt’s messages are broadcast in all 50 states and 122 countries around the world through Touching Lives, a television and media ministry.

Dr. Merritt has published several books including How to Impact and Influence Anybody, God, I’ve Got a Question, Still Standing, What God Wants Every Dad to Know and 52 Weeks with Jesus with Harvest House publishers. His heart for pastors has also resulted in PastorsEdge.com, a ministry resource, and Impact1 Men’s Conferences.