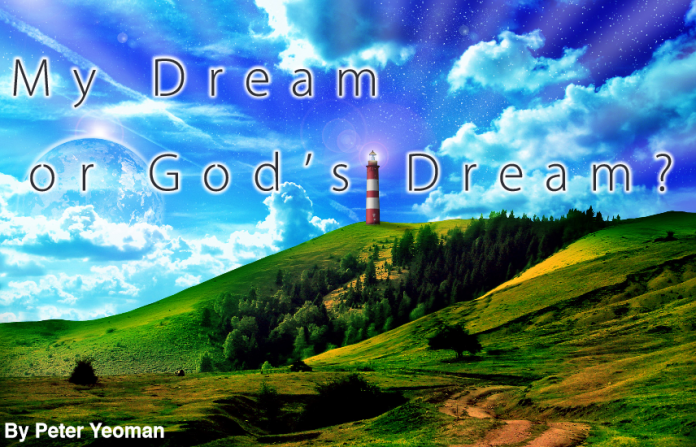 Many are encouraged these days to go after their dream and to dream big. However, I think it is wise to clarify the origin of the dream before venturing out, with the potential of becoming ‘unstuck’, if the dream is from our own desires or thoughts. I would like to share this testimony and hope that it will encourage you in the right direction, for if the dream is from the Lord, nothing will stop it.

Early in the year 2000, I had a dream in which I was talking to Steve Hill (evangelist at the Brownsville Revival) and inviting him to minister at a gospel crusade in Wales. At this I had no reason to believe that it Lord, and so it remained in my mind as merely a dream. A few nights later I had another dream, and again I Steve Hill. He was thumbing through his diary and shaking his head, doubtfully, because it was so full and then said, “It’s ok, I am sure we can fit it in somewhere.” Now I significant way.

It was the following day that John Marshall, an old friend of mine, visited our home and the first words out of his mouth as he crossed the threshold of our house were, “When is Steve Hill coming?” Naturally, I I this. Only . I decision, so I the computer, and with faith the size of a mustard seed, I sent an email to Harvest Time Ministries inviting Steve Hill to minister at a Wales. I had received a reply and my breath was taken away from me as I read, “Will be glad to come. When would you like it to be?”

Through the I knew not only what to do, but also where . Lord had pointed out that small, , of West Wales. Historically, God had put his footprint there in an , , the Welsh Revival of 1904, but in the God there was still unfinished business. , the village of Penygroes has a population of a mere 3,000 but it also has a church building and Convention Hall that can seat up to 2,000. , called The Apostolic Temple, is the only building in Wales to be revival in Wales.

details, a group of pastors came together, denominations and churches, to form a steering committee that over the ensuing two years. We ride of emotions as we endured discouragement, disappointment and almost desperation. If ever the word of the Lord was tried it was during that period.

of those moments that the Lord intervened in a remarkable way. I parcel from Switzerland. In that manuscript of ‘Cradle of Mystery’ (A name of Jones Williams who had been saved during the revival). purpose. As I , I Spirit of this manuscript who was the Jones ( Dan ). , “The Lord was putting our faith to the …It would have been impossible to prove the divinity of the words without obedience.”

, inspired question and comments of my friend John Marshall, were being tested. The test, however, was not simply about the word received, but about our faith and obedience to it. I now knew that forward was the only direction to go and confidence began to build and grow.

Two weeks prior to the crusade in June 2002, we gathered for a prayer breakfast on a Saturday morning. together to pray. After a hearty breakfast in a local Bible College, , rain, towards the convention hall. , ( vandalism) pour through on to the floor and platform area. The building and surroundings were a far cry from presentable, so at this moment we needed to be like Joshua and Caleb who had a different spirit what they saw with the natural eye. sing, God’s praises the presence of the Lord filled the place and sealed in the hearts of those who were gathered a renewed sense of purpose.

weeks may not be described as , nevertheless, it was God. For as in the book of Nehemiah, God, many of whom I had never met before, country, “Then they set their hands ” (Nehemiah 2:18). , affectionately called ‘The Mount’ , gardeners, carpenters, cleaners and handymen of all kinds setting their hands to the task.

Finally, . , car , appointed, flags of many nations , and . All we needed now was for the people to come. Some had said that people would not travel to a small village that was situated so far from the main cities, so perhaps this may be an encouragement to those of us who are serving the Lord in small places.

May to those of us who are serving the Lord in small places.

(four ) we church for our morning worship Swansea Valley. playing the song, ‘People need the Lord’ by Steve Green.

Everyday they pass me by, I can see it in their eye people filled with care, Headed who knows where they go through private pain, Living fear to fear hides their silent cries, Only Jesus hearsPeople need the Lord, people need the Lord…

Suddenly, the Holy Spirit filled the house and people began weeping and calling on God. There was no specific worship or preaching because God came and took over. It was an awesome ‘AMEN’ from heaven to what we were doing.

On the morning of the opening I must confess that though ‘confident’ Holy Spirit, the flesh and Satan heart. Yes, small apprehension, loudest, but faith in what God had spoken was carrying us through.

God, crusade over four nights with responding to the altar call as Steve Hill proclaimed an unadulterated gospel. As a result, churches and serving the Lord. , even pastors. Not only that, but through the medium of television, across Europe and Africa as the the evening of the crusade.