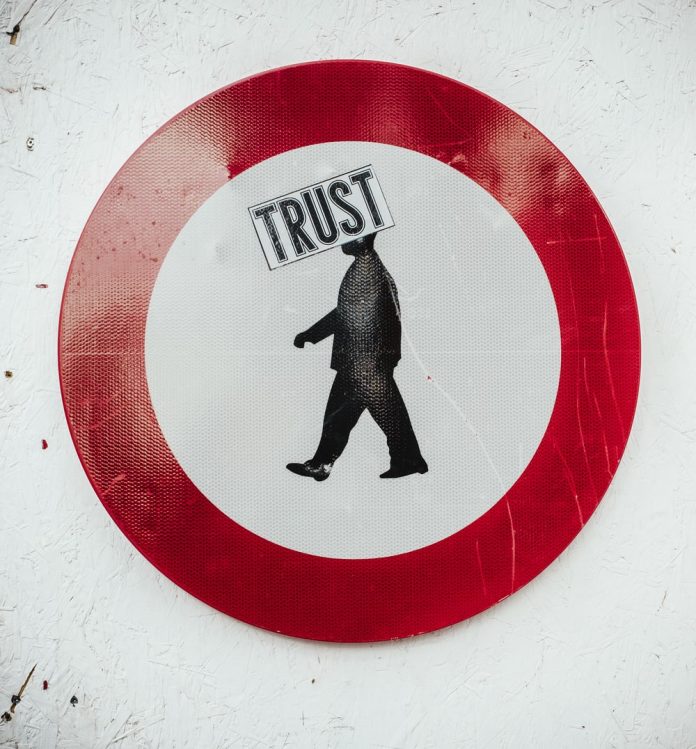 The glue that holds all relationships together — including the relationship between the leader and the led — is trust. And trust is based on integrity. — Brian Tracy

Not sure there is anything more foundational or more crucial for every relationship. Trust or the lack thereof, determines the quality of all human and supernatural relationships in life: spouse, family, friends. God.

I remember years ago I was driving home from a particularly challenging day at work. The screaming match was really quite one-sided since I was the only one in the car. “I know that I’m supposed to, but in all honesty, I DON’T TRUST YOU, GOD!”

Perhaps it was actually hearing me mouth the words that brought this ongoing spiritual malaise to a climax. Or, the stark honesty of it all. I didn’t repent. But I did acknowledge, “I don’t trust you. But I’d like to. Count me in with the distraught father of a demon-possessed son, ‘Lord, help my (unbelief) mistrust.’”

Not much need to define terms here. We all know what trust looks like, at least when we have it. It’s a universal fact that trust often takes years to earn (except in infants) and mere nanoseconds to destroy.

Let’s focus on trust in the workplace (You can extrapolate to your other relationships. The constructs are the same).

First, the sequence of building trust is nearly universal. You begin by being worthy of trust.

2. Integrity. Proven by past behaviors. Consistent displays of fairness. High moral standards. And the frequency of matching your walk with your talk.

3. Benevolence. Caring and cherishing others. Honestly and authentically helping without thought of reciprocity or personal benefit.

But what happens when leaders — or entire organizations — fail the trustworthy test? What are the results of scandals or crises? Think, Liberty University, Ravi Zacharias, Hillsong Church among far too many others in recent memory. And what about the known or suspected sins of leaders that have yet to be uncovered publicly — or worse — known, but swept under the rug? What happens to trust then?

When employees find themselves suddenly, and through no fault of their own, working for a scandalized or vilified organization, it can be a demoralizing or even devastating experience. Imagine the public shame and embarrassment of working at PTL back in the late 80s. Or at ___________, you fill in the blank. The result is the same.

Rather than delve into a litany of reasons why religious leaders fail — and recently it seems, fail so often — in this blog I want to focus on one potential reason: the prevalence of fundamentalism’s ripple effects. If you care to read more about toxic leaders, please check out previous blogs on these topics.

So, what is fundamentalism and why is it still so dangerous?

Religious fundamentalism refers to the belief of an individual or a group of individuals in the absolute authority of a sacred religious text or teachings of a particular religious leader, prophet and/or God . These fundamentalists believe that their religion is beyond any form of criticism, and should therefore also be forced upon others. Logical explanations and scientific evidences have no place in these belief systems if they work against their religious fundamentals. For fundamentalists, religion dictates every sphere of their daily lives, and they also attempt to involve the entire society into their own belief system, often by the use of force.

· ANY religion can have fundamentalist believers.

· The above definition has several points with which many of us would agree.

· The above definition makes important distinctions which, I argue, should scare us intellectually and spiritually.

· Religious abuses often are the result of whole-hearted adherence to the above described religious behaviors.

Quick breakdown of the definition:

– absolute authority of a sacred religious text…for the orthodox Christian believer, this is a core tenet of our faith. The Bible is the absolute and inerrant Word of God.

– religion dictates every sphere of their daily lives…We do believe that our Faith informs all aspects of life and how we live it.

But beyond those two points of agreement, the remaining concepts are terrifying to me. And that’s my point.

I worked for an organization whose roots are, in our parlance, ultra-fundie.

It’s their way. Or the highway — to use another cultural cliché. So much so, in fact, that their code of conduct is known as The Way. Why? Well, of course, because there can be no other way.

And what happens when one strays from The Way? Fines. Reprimands. Terminations.

And how is this way enforced on a daily and practical level?

You see, if we don’t trust that you will abide by our rules — from the get-go — then we’ll never trust you. And thus, all sorts of pathological leadership results:

· Employees are not cherished.

First and foremost, the organization’s most valuable assets are treated transactionally — just do you work (our way) and we’ll pay you. Don’t get creative. Don’t think outside the box (read: outside the prescribed way) or else…

Soon after I arrived and began exploring my “territory,” I began asking questions. An administrator’s reply, You ask really good questions that we need to consider. Several years later the reply was less cordial, You need to STOP asking questions!

When there is only one way to do things in a corporately-approved manner, employees are forced to seek approval, approbation and reassurance that they are on the right path. In fundamentalist-controlled institutions there is little of these. Bosses don’t praise for good work — it’s the minimum expectation. Glowing evaluations don’t exist here. Just do your job. Transactional, remember?

Leaders in these organizations are often poor — if not horrible — communicators. Why spend time engaging your followers when their input is not required? Not solicited? Not valued? The result is a vacuum of information and direction. Vision is not cast. And when it is, it’s delivered in the form of dictums and edicts. Anxiety leads to speculation which leads to fantasies of what the boss really meant. Which all adds up to an infectious and toxic paranoia.

· Then the inevitable Passive Aggressive Behaviors become the dominant pattern within the ranks.

Since the fundamentalist leaders most often attempt to avoid conflict at all costs, and they certainly can’t abide disagreement, employees are left with few options. Passive aggressive personnel find they can dissent without rocking the proverbial boat and express their resentment and opposition to leadership’s demands and behaviors by:

o And indulging in increasing hostilities toward leaders

The goal is to quiet all opposition. To silence the malcontents. To punish into submission any new, creative or clever solutions to corporate challenges. “Just do things our way, and all will be well with the world.”

The intended effect is to dis-incentivize innovation. And to drive from followers any desire to dissent, improve their situation or work outside the approved systems.

What lies at the bottom of this barrel? MISTRUST.

How about some good news? OK. Let’s imagine you lead an organization or unit that, for whatever reason(s), has lost the trust of employees, leadership above your level, customers or stakeholders. Here are three simple yet vital ideas to begin the slow and often tedious process of repairing and rebuilding lost trust:

1. Acknowledge. Just like repentance from sin, we first must recognize our mistakes and determine to turn from the offending behaviors.

Likewise, the first step to rebuild corporate trust is to acknowledge the problems. In life and eternity, nothing is more powerful than admitting guilt and owning the problem.

Once you’ve corporately admitted to the breaches of trust, allow your employees to express their feelings — safely. Understanding and empathy will go a long way toward restoring what has been lost. And do so without debate, arguing or recrimination.

2. Apologize. See a biblical pattern emerging here? First, we recognize our sin. Then we confess it. If this is done with sincerity, you’ve begun the healing process. A new course forward has been set for the incremental re-growth of trust.

And just like responding to the conviction of the Holy Spirit, confession must include:

o A commitment to repair the damage

o The promise to not repeat the errors of the past, but build a better, healthier environment

3. Act. If nothing in the leaders’ behavior changes, not only is trust not restored, it most likely is permanently destroyed.

The key here is to have a real plan of action. Detail that plan with those most affected. Let them see you in a new and more transparent light. If you can’t be authentic laying out a new and better future working environment, you’ve wasted your time and theirs. Outline how you’ll be accountable and why that is so important moving forward.

Toxic leadership takes on many forms. It has myriad origins and roots. But at the heart of almost all pathologies is MISTRUST. Biblical accounts are many:

Perhaps ranking as the Number One example was Lucifer whose ambition and pride were motivated by a complete mistrust of Yahweh’s plan and beneficence. So he took matters into his own rebellious hands. And thus, the sinful quandary of our world today.

Of all the leadership traits and behaviors, none is more vital, more crucial to your success, than trust. And while it’s romantic to believe that love conquers all…it’s far more honest to recognize that it is trust that holds all things together.

Trust is the universal glue. Trust me.