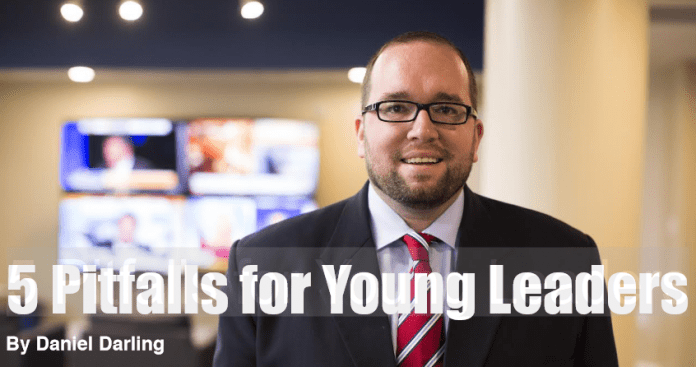 When I assumed the pastorate of Gages Lake Bible Church, I was twenty-nine years old. I’d served in a senior staff position at a large area church, so I thought I knew leadership. But it wasn’t until I was in the crucible of leadership as the senior pastor, the chief executive, that I realized the gravity and weight of the position I was called to serve.

I’m still fairly young, but along the , mostly by experience, that have helped me grow. My desire is to the pitfalls I often found myself in. Here are five of the most common leadership pitfalls.


1) The Pitfall of Pride

The about young leadership. Perhaps given by the aging Apostle Paul to Timothy, his young protege. One the one hand, Paul tells Timothy not his youth get in the way (1 Timothy 4:12).

On the other hand, Paul warns against appointing immature people to weighty positions because they lack experience, can get filled with pride, and can cause their own destruction (1 Timothy 3:6).

Pride is an especially pernicious . What –our vigor, our energy, our ideas–can also lead to our downfall. Youthful energy can ignite movements, can catalyze change, and can change the world. It can also isolate us , , criticism.

Very few people will hold a young leader accountable for his pride. Most will be in awe of the talent and charisma and will ignore those negative character traits. This is why the best young leaders surround themselves with people who are allowed to criticize. People who have permission to constructively confront us and call us to our better selves.

2) The Pitfall of Seeking

I don’t think fame itself is inherently wrong. I pastors and speakers are out of touch, entitled, and autocratic. In fact, I’ve met many who are just the opposite and impressed me by their humility. I believe God, in his sovereign will, allows some to have a platform they can leverage for kingdom influence.

But young Christian leaders have to fight the corrosive temptation toward an all-out pursuit of fame and influence, at the expense of proclaiming. godly ambition, but we must die our need to be wanted and liked and sought after.

This can be tricky, a sort of fine line . always sure where that line is–it different for every person. I our motivations for ministry are to glorify God and serve His people or to enrich ourselves. We need us of our humanity and who are unimpressed by our gifts.

3) The Pitfall of Comparison

Envy is the lifeblood of so much of our competitive culture, even in the Church. There is a dangerous tendency to compare and measure . prone to trap, looking platforms aren’t bigger, why our churches aren’t growing as fast, coveting speaking engagements.

to have more success than they do. downloads with other pastors and compare their sermons with the . Worship leaders wonder why they aren’t being pursued to produce the next great worship album.

4) The Pitfall of Anti-Establishment

Our growing up years shape us in more ways than we know, with , , school, , negatively. , lead as a reaction to what we’ve seen.

So it goes. It’s good to understand . destructive to act as though we are the first generation to finally correct all of the problems in the Church. the feet of those who have gone before, to hear their stories and understand who they were used by . And we’d be foolish if we don’t realize that one day it will be us as the foil for another generation’s change movement.

When we’re young we tend to see ourselves as the hero in our own story, the Gideon/David/Abraham rescue . There is a tendency among young leaders to think of ourselves as “people we’ve been waiting for.” The church is going one way but we know better and we are going to lead it the other way.

I see this a lot in marketing for . Every Christian the one will finally have . “revolutionize” study the Bible. Every new church growth book is the thing that will move a church from stagnant to successful.

. themselves and their movements reality. Wise leaders are neither cynical nor overly optimistic. And they realize that every movement is only building on the one that came before.

Young leaders need to be reminded, daily, that our story is not our own. God is the author of our story and it is Him who is after glory. The work of the Church was here when we got here and will be here when we are gone.

Daniel Vice President for Communications for the Ethics and Religious Liberty Southern Baptist Convention (ERLC). For five years, Dan served as Senior Pastor of Gages Lake Bible Church in Chicago and is now the author of several books, including Teen People of the Bible, Crash Course, iFaith, Real, , Activist Faith. He is a weekly contributor to Parse, the blog of Leadership Journal. His work has been featured in evangelical publications such as Relevant Magazine, Family, The Gospel Christianity Today. Dan’s CNN.com’s Belief Blog, Faithstreet, Washington Times, Time, Huffington Post and other newspapers/opinion sites. He has guest-posted on leading blogs such as Michael Hyatt, Jeff Goins, and Jon Acuff. He is a Crosswalk.com, Churchleaders.com, Covenant Eyes, and others.

Dan is a sought-after speaker and has been interviewed on TV and radio across the country, including CNN, 100 Huntley Street, Moody Broadcasting Network, Harvest Television, and a host of other local/national media. He is also the host of a weekly podcast, The Way Home.