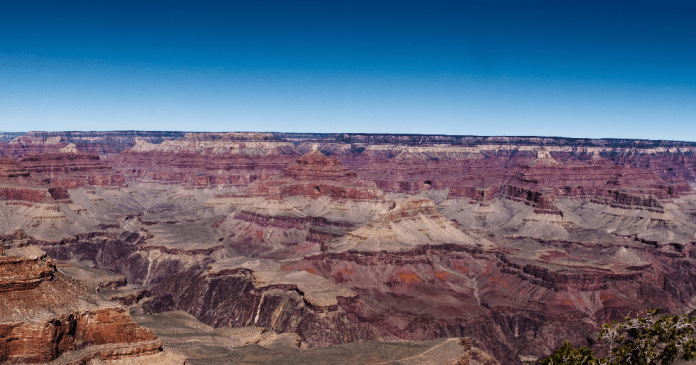 Louise and I visited the Grand Canyon in 2011. I had wanted to go there for as long as I can remember. An invitation to Phoenix, Arizona, put us within three hours of this amazing site.

The drive to Phoenix with our friends Joe and Tammy was barren much of the way—just the odd cactus dotting the roadside. I’d never seen a cactus in the wild before. Finally we were there. I don’t have the words to fully describe the Grand Canyon, because you simply have to see it. We marveled at the vastness of God’s creation as we looked at the mile-deep canyon leading down to the Colorado River. The human eye is unable to comprehend the scale of what we were seeing. Parts of the river are almost a quarter of a mile across; but from the top, it looked only a few yards wide.

One moment we were gazing at a vast expanse. The next minute we were acutely aware of our smallness.

Along the rail that surrounded our lookout spot, we found a small, framed plaque of various scriptures proclaiming the wonder of God’s creation. The evidence of creation surrounded us as far as we could see. But before we could even finish saying, “Wow,” a park ranger approached us and began passionately speaking about the millions of years it took to create the canyon. He sang the praises of nature.

Paganism worships the natural and believes this world is all there is. Geologists used to teach that the Colorado River carved out the Grand Canyon over millions of years. But recent scientific evidence makes that theory problematic. Now, as the park ranger declared to us, scientists think some of the canyon walls were formed by being “raised up.” Raised up by what? The park ranger had no answer to that question. He admitted that to date, no scientist, using only known scientific principles and data, can fully explain how the Grand Canyon came to exist. This conversation was a stark reminder to me that the opinions of man don’t last long, but “the word of our God endures forever” (Isaiah 40:8).

THE WONDER OF THE WORLD’S DESIGN

Such a vast and complex universe as that which we know exists around us, may have been absolutely required . . . in order to produce a world that should be precisely adapted in every detail for the orderly development of life culminating in man.

In other words, the conditions had to be just right in the heavens and the earth or humanity could never exist. Today we hear the opposite from evolutionists—they say the universe is so big and involves so many components that life had to happen eventually.

I am no astronomer, but no one disputes that the way Earth relates to the solar system is essential for human life. Meeting the narrow parameters that support life would be like hitting a pin-dot target in the middle of our galaxy. We couldn’t merely hit a glancing blow or the edge of the target. The many and diverse conditions necessary to sustain the variety of life we find on planet Earth requires a bull’s-eye. Let’s consider a few of the many bull’s-eyes that blind chance would have had to hit precisely in order to support the existence of life on Earth.

The Size and Proximity of the Sun

So if the sun were either greater or smaller, or if the sun were closer or farther away, humanity wouldn’t survive on Earth. Maybe there could have been a less perfect planet populated only by cockroaches and spiders, but who would want that? That humanity can coexist with whales, willow trees, wombats, polar bears, and volcanoes is beyond amazing.

Another positive factor for the existence of life as we know it on our planet is the tilt of Earth’s axis. If Earth’s axial tilt were even slightly larger or smaller, then the surface temperature differences would be too extreme to sustain life. As we have seen, surface temperature differences affect, among other chemical processes, the presence of water. We do not have enough space in this book to marvel enough at the amazing composition of water, but its careful design makes it one of the most unique, life-supporting substances ever conceived!

If the rotation period of Earth relative to the sun were longer than twenty-four hours, then temperature differences between night and day would be too great to support life. If the rotation period were shorter, then the resulting atmospheric winds would be too destructive for any life to survive. The existence of life on Earth depends on the twenty-four-hour day that results from Earth’s exact rotation relative to the sun.

What if our planet did not have the moon? Scientists have learned that we need the moon in order for human life to exist. If Earth had no moon, then the ocean tides would be much smaller and affected by the sun. Without the moon, it would be much darker at night and days would be much shorter. Years could last as long as one thousand days. The moon is essential to sustaining life on Earth.

Thickness of the Planetary Crust

If the planetary crust of Earth were thicker, too much oxygen would transfer from the atmosphere to the crust, leaving insufficient oxygen in our own atmosphere to support life. However, if the planetary crust were thinner, then the resulting increase in volcanic and tectonic activity would prevent life as we know it. I liken this to pizza: neither deep pan nor thin, but somewhere in between.

Scientists have also discovered that the planet Jupiter is necessary for life on Earth. Meteorites would have long ago wiped out all living things in our galaxy but for one fact: Jupiter. Planet Earth needed another planet in our solar system large enough and with a powerful enough gravitational pull to take the hit from meteorites on our behalf. Like a kind big brother fending off the bad guys, Jupiter protects Earth from meteors.

We can see for ourselves that Earth, and the entire universe, had to be at just the right conditions for life to occur. So now we have two options to explain how the universe got the way it is—either everything in the universe accidentally evolved through chance, or it was purposefully designed by a Creator.

Creation declares the glory of God, and humanity is the pinnacle of creation. This is an accepted interpretation of Scripture throughout most of church history. So it follows that God must have some purpose in creating us. The Bible story emphasizes the salvation of the human race as God’s primary concern. So we need to know Him and be right with Him. Jesus came ultimately to die and rise again for us who live in this little place.

So let His Word speak and settle this question in your mind. Let there no longer be any doubt: God made the world, and He made you to seek Him. Believe the beginning of the Grand Story. Believe the evidence, and believe His Word.

Rhys Stenner is the senior pastor of New Hope Baptist Church, with two locations in the South Metro Atlanta area. Rhys was previously senior pastor of Holland Road Baptist Church in Brighton and Hove, England. New Hope is noted as one of the more diverse churches in Atlanta, with a strong teaching ministry on radio and podcast. In addition to his leadership at New Hope, Rhys has founded and leads a partnership of many churches in Wales, as well as founding a pastors’ network in South Metro Atlanta. He is married to Louise and has three girls. He lives in Fayetteville, Georgia.

Purchase his book, If In Doubt, at: http://worthypublishing.com/books/If-in-Doubt/