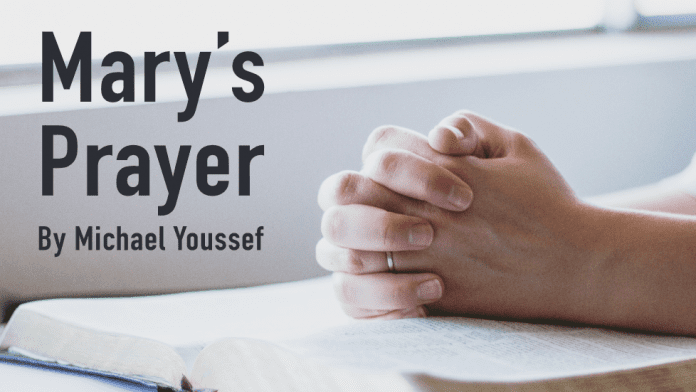 In the Gospel of Luke, Mary goes into the hill country of Judea where her cousin Elizabeth lives. Elizabeth is pregnant with the baby who will grow to be John the Baptist. When Mary and Elizabeth greet each other, Elizabeth’s unborn baby leaps within her womb, and Elizabeth says, “Blessed is she who has believed that the Lord would fulfill his promises to her!” (Luke 1:45). Mary then responds with this beautiful canticle of praise to God.

Mary’s prayer of praise is one of the most often recited prayers in Christian liturgy. Among Protestants, the Magnificat is frequently sung or read during the Advent season. It is sung even more frequently in Catholic, Anglican, and Eastern Orthodox services, such as vespers, evening prayers, and Sunday matins. In addition to Johann Sebastian Bach, many composers have set Mary’s humble words to magnificent music, including Vivaldi, Anton Bruckner, Rachmaninoff, and Ralph Vaughan Williams. As beautiful as all these musical compositions are, they are like gilded frames around a simply rendered painting. The true artistry and power of the Magnificat is not in the frame but in the lines spoken by the virgin herself.

I wish I could step into a time machine and journey back to that day when young Mary, a girl probably no older than fourteen years old, walked that dusty road into the hills of Judea to the home of her cousin Elizabeth. I wish I could be there to see Elizabeth and Mary embrace and to hear the words of the Magnificat from Mary’s own lips, spoken for the first time in history.

It’s true, I wouldn’t understand the Aramaic language in which Mary spoke these words. But I wouldn’t need to. I would see the joy of the Magnificat shining in her eyes, and I would hear the sweet humility and reverent praise in the delicate vibrations of her voice. What a privilege for Elizabeth to hear this prayer, which would be recited millions of times down through the ages, and to hear it in Mary’s song like voice for the very first time in human history.

My soul glorifies the Lord and my spirit rejoices in God my Savior, for he has been mindful of the humble state of his servant. From now on all generations will call me blessed, for the Mighty One has done great things for me—holy is his name. His mercy extends to those who fear him, from generation to generation. He has performed mighty deeds with his arm; he has scattered those who are proud in their inmost thoughts. He has brought down rulers from their thrones but has lifted up the humble. He has filled the hungry with good things but has sent the rich away empty. He has helped his servant Israel, remembering to be merciful to Abraham and his descendants forever, just as he promised our ancestors. (Luke 1:46–55)

Mary composed these words out of a heart full of gratitude. God had chosen to bless her among all women by placing in her womb the baby who would become the Savior of the world. The mystery of the incarnation was growing inside her.

The Creator of all creation was implanted as an embryo in the womb of one of His creatures. The most important human life ever conceived was growing inside her. The most important time in history had just begun. The long-promised Messiah would soon be born—and she would be His mother!

When I think of this teenage girl and the awesome honor and responsibility that was bestowed on her and the humility and joy with which she received it, I can’t help thinking about teenagers today. I know so many Christian teenagers who are committed to living for Christ, who often must take bold and courageous stands against bullying peers, anti-Christian school officials, a hostile post-Christian culture, and the entertainment media that seeks to break down their faith and values.

I also think about non-Christian teens growing up in a world that seeks to destroy them. They are immersed in a corrosive cultural philosophy that says they are nothing but evolved animals in a godless and unfeeling universe driven solely by hormones, instincts, and passions. My heart breaks for teenagers who have never heard the good news of Jesus Christ.

The virgin Mary, the mother of Jesus, expresses a pure and godly sense of self-worth, self-esteem, and self-love in the Magnificat. I wish every young person in the world could read or hear her words, learn from her example, and know what it means to be truly loved and blessed by God. I wish they could know that the Son of God came from heaven, died on the cross, and rose again for their salvation. I wish they would receive Him so they could know that He has adopted them as sons and daughters, and has given them a new name, His name, and that He alone can bring them the joy and fulfillment they seek in this life, along with eternal life in heaven.

More than two thousand years ago, this young girl from Nazareth—the least of all the towns of that region—expressed a healthy self-esteem and a humble and selfless spirit. No one can make you feel inferior without your consent, and Mary would give no such consent, even though there were surely many people who wanted to destroy her reputation because of her unwed pregnancy. She said, “My spirit rejoices in God my Savior, for he has been mindful of the humble state of his servant” (vv. 47–48).

Dr. Michael Youssef was born in Egypt and lived in Lebanon and Australia before coming to the United States and fulfilling a childhood dream of becoming an American citizen. He holds degrees from Moore College in Sydney, Australia, and Fuller Theological Seminary in California, with a Ph.D. in social anthropology from Emory University. He founded The Church of The Apostles in 1987 with fewer than 40 adults with the mission to “Equip the Saints and Seek the Lost.” The church has since grown to a congregation of over 3000. This church on a hill was the launching pad for Leading The Way’s international ministry.