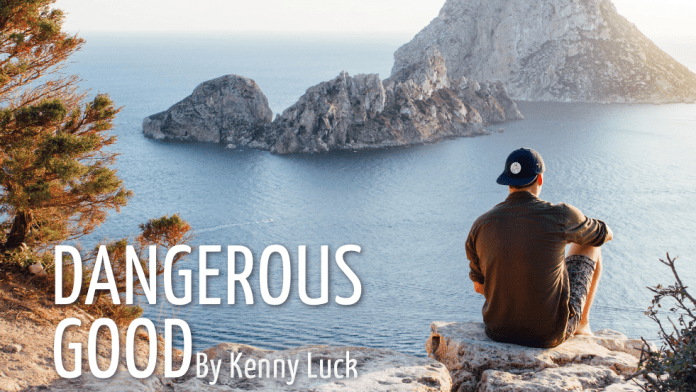 The truest thing about you is what God says is true.

Competing voices and forces are in a recruiting war over whose version of yourself you will accept, internalize, believe and then put your energy behind. But when the man of God believes and acts upon what God says is true about him, an explosion of personal transformation occurs.

You abandon any image of yourself that is not from God.

You stop chasing, caring about and accepting what others say about you.

You’re not defined by your feelings.

You are not defined by your circumstances.

You are not defined by your successes or failures.

You are not defined by the car you drive, the money you make or the house you say you own (the bank owns it, actually).

You are defined – and redefined – by God and God alone.

In its essence, the dangerous good revolution of men– men who won’t settle for mediocrity and dare to confront the evil around them – is a revolution of your perspective on you!

But why? Why should I let God redefine me? Why should I release every last part of my will to this process? What will God do in my life if I say yes? If you are not asking these kinds of questions, you should. If I were being asked to accelerate my spiritual commitment to the level of “dangerous good,” I would want to know what I was getting into.

Fortunately, we have a complete picture of what a dangerous good life looks like. Jesus came and lived His life as a man, giving us a model for how a man lives out his truest identity. He came not only to show us that living for an audience of one is the right way to behave, but also to motivate us to do the same. Masculinity starts and stops with Jesus. He is both alpha and omega male when it comes to living in front of God.

Christ defies the gender-bending labels of today’s culture, transcending and overcoming them. Jesus brings masculinity to a place where cultural man cannot go but where every man on planet earth longs to be: a place where danger and good come together.

Living Out My Truest Identity Gives Me the Greatest Integrity

In Mark 12:14, Pharisees and Herodians come to Jesus and say, “Teacher, we know that you are a man of integrity. You aren’t swayed by others, because you pay no attention to who they are; but you teach the way of God in accordance with the truth.”

The word “integrity” comes from the math term “integer,” which means whole or undivided. To possess personal and spiritual integrity means to have a life that is undivided between what you believe and how you actually live and think. Jesus knew that He came from God and that He was going back to God;

He knew who He was so He didn’t have to become someone else. His critics could not accuse Him of hypocrisy; even though they wanted to find dirt, Jesus was the real deal and they had to admit it.

Jesus was not a man-pleaser but a God-pleaser. He was an audience-of-one kind of guy. He didn’t have to overthink social settings or situational ethics because His identity told Him to do that one thing which would show love for God and people in a given moment.

That meant Jesus broke the rules of broken male culture when compassion or God’s Word required it. That is significant. The religious men of Jesus’ day marginalized women, children and Gentiles (non-Jews). As we can see, Jesus wasn’t “swayed” by those men. There is your working definition of integrity, and the byproduct of a true identity in God: God’s man does not pander to people, but lives out God’s purposes regardless of the rules of culture. He is a Son of Christ, not a son of culture.

The dangerous good revolution is marked by spiritual integrity and will be a movement of fearless men who are like Jesus.

Living Out My Truest Identity Gives Me My Strongest Liberty

Unbound by the opinions of men and only concerned about the opinion of the Father, Jesus was free to associate with anyone and care for anyone. In fact, His identity in the Father provided Him with such a transcendent freedom that people mistook it for having low standards.

When we watch Jesus live out His truest identity, we both see and sense a personal liberty of thought and action. We see Jesus regularly accept those deemed physically unacceptable (lepers), ethnically unacceptable (Samaritans), morally unacceptable (prostitutes) and socially unacceptable (tax collectors) into His life and ministry. His identity in the Father allowed Him to jettison the boundaries and self-absorption of broken male culture and get into the lives of those who most needed the grace and truth of God.

There is your working definition of personal liberty and the byproduct of a true identity in God: God’s man is set free to care about, serve and dignify people whom lesser men abuse, exploit or marginalize. He is a son of Christ, not a son of culture.

The dangerous good revolution will be a movement of free men who are like Jesus.

Living Out My Truest Identity Gets My Best Energy

A fireman puts out fires. A policeman protects the community against lawbreakers. A businessman makes money by providing a service. A foreman manages a project through to completion. What does a man of God do?

Jesus did not dabble around.

Three years, twelve men and ultimately 20 centuries of movement were the result of an extremely strong identity and a correspondingly strong focus in His earthly years. Jesus knew the clock was ticking, and such knowledge creates urgency. Urgency, in turn, creates energy and effort.

Jesus’ identity as Son of the Father drove His perspective. He was on a mission to accomplish what God had uniquely given Him to do during His limited time on earth. The key word? Limited. He did not get bogged down in peripheral, trivial or temporal focuses competing for His energy. He chose instead to focus on what was central to His identity: heaven.

Specifically, we see the Son of God telling people how to get heaven, blessing others in ways that helped them to recognize the God of heaven and completing His mission on earth in anticipation of His return to heaven.There is your working definition of giving your best energy as the byproduct of a true identity in God: God’s man is on mission in his context — in his geographical space, in his spheres of influence, with the people and opportunities God has given him. He knows intuitively that he has limited time, an unknown ending and a scheduled meeting with Jesus himself. He is focused on hearing at that meeting, “well done, good and faithful servant.” He is a son of Christ, not a son of culture.

The dangerous good revolution will be a movement of focused men who are like Jesus.

What happens when we die? How you answer that question reflects your identity. A man of God believes he’s going to God, and when he goes it’s not for the purpose of being ruled in or out of heaven, but to be examined as a manager of his life.

Before Jesus goes, voluntarily, to the cross, he contemplates his physical death, offering his most transparent and reflective prayers. Some personal accounting with respect to His life’s journey is taking place in this prayer; the prayer process reveals the thinking process.

“Let’s see. Did I bring God glory? Check. Did I do on earth what God put me here to do? Check. Can I return home with a clear conscience that I did everything I could to reveal God’s love and plan? Check.”

Jesus’ prayer reveals that he was ready go back home to the Father: He had no unfinished business here on earth; He had been faithful; He was complete. His prayer functions as a kind of final check with the Father.

There is your working definition of how your truest identity reflects your ultimate destiny: God’s man knows that his identity in the Father includes being with the Father forever. The visible fruit of that knowledge is faithfulness to the end and completeness when the end comes — no unfinished business.

The dangerous good revolution will be a movement of faithful men who are like Jesus.

Taken from Dangerous Good: The Coming Revolution of Men Who Care by Kenny Luck. Copyright © 2018. Used by permission of NavPress. All rights reserved. Represented by Tyndale House Publishers, Inc.

Kenny Luck is the founder of Every Man Ministries and host of The Every Man Show. His latest book, Dangerous Good: The Coming Revolution of Men Who Care is now available at www.everymanministries.com. 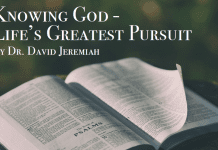