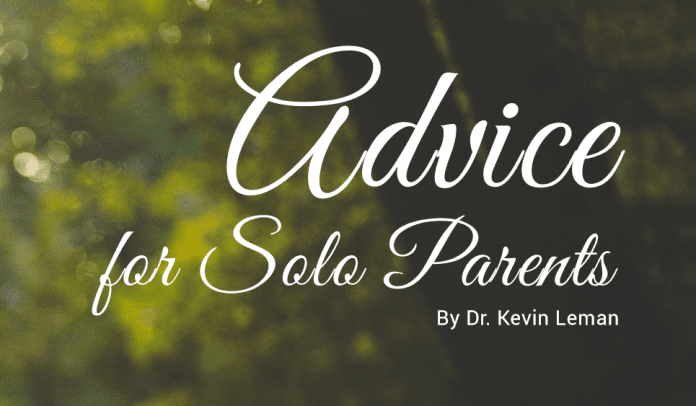 Throw away guilt, give yourself a break, and discover what your children really want from you.

Today, many parents are going it alone. No matter how you became a single parent, you’ve got a hard job. You’re breadwinner and bread baker, guide and gorilla, nurse and nag. Single-handedly taking on the job of parenting is exhausting. If you’re like most single parents, you’re probably weary. (“That’s an understatement!” you’re saying.) On top of that, you feel an intense load of guilt, because you can’t do enough for your kids. After all, there’s just one of you to go around—one working parent with only 24 hours in your day.

But being a single parent doesn’t mean your kids are doomed to some kind of second-rate life, or that they’ll be forever scarred by having just one parent. I know many children of single parents who are responsible, happy, productive, and well-adjusted. Yours can be too. Here’s how.

Your Most Important Priority: Take Care of Yourself

If you’re a single parent with custody of your kids, your life is full of stress. Actually, let me rephrase that—your stress levels are off the charts. There are always 10 million things to do and time for only 12 or 13 of those things. If it’s not your boss asking you to work late, it’s your kids needing a ride to an activity or the bank calling about a late loan payment. It’s always something.If you’ve lived in such high stress for a while, you’ve learned to power along at a rapid pace. You’re so used to it, you no longer notice how stressed you are. But that cumulative pressure will catch up with you sooner or later, so don’t wait for that to happen. To ease your stress level now, try these tips from other single parents in the trenches:

1. Always cover the basics—rest, food, and exercise. Get seven to eight hours of sleep a night, and don’t skip meals. Avoid snack foods and fad diets. Use playtime with your kids to be active, or find a friend to walk with at a regular time when your kids are otherwise occupied.

2. Tackle your schedule and set your priorities. You can’t do every¬thing, so why are you trying? Don’t be a “joiner.” Learn to say no when people ask you to do time-consuming things. If you’re a people pleaser, you’ll find this extremely difficult. But thinking of the alternative—exhaustion—should help you in your resolve. No parent can do it all, not even in a two-parent family. Don’t let guilt drive you further from your kids by involving yourself in unnecessary activities. You only have so much time, and your children need you more than that extra work meeting, the PTA, or the neighborhood garage sale does.

3. Be aware of your high-stress times, and schedule time for yourself. (You really do deserve it.) A certain time of day might be the hardest for you—such as 5:30 to 6:30—because you’re transitioning between work and home. Maybe stopping for coffee by yourself, drinking it slowly, and taking a walk for a couple of blocks before you head home would be the best medicine for you and your kids. Then if your kids are bouncing off the walls when you get home, you won’t go through the roof.

If a particular task—such as paying the bills online or sorting out boxes of photos from when you and your ex were together—is difficult for you, indulge in a treat or a mental mini vacation at the end of it. If something your kids do routinely makes you tense, talk with them about it and ask for their help.

One mom declared that the first half hour after she got home would be “quiet time” for everyone in the house. She was not to be disturbed, and all the kids had to choose quiet activities. After that, she tended cheerfully to their needs, listened to them talk about their days and what they might need for tomorrow, and made dinner. But first she needed those 30 minutes of downtime. Her kids learned that their lives were much sweeter when Mom had that time off.

Sometimes your needs have to come first. So pamper yourself a little. Find small indulgences that make you feel like a million bucks even if they only cost $7.50. Get takeout delivered every once in a while, give yourself a pedicure, enjoy a long shower, or go to a free concert with friends. Develop a babysitting co-op so each of you has a night off every so often to do anything you want. Budget some time and money for your own simple pleasures. Most of all, don’t feel guilty about it.

What does all this have to do with reality discipline? It’s a starting point for you. For such discipline to work, you need to be a strong entity in the family, and that means taking care of yourself. Every parent deserves some time off.

Taken from Making Children Mind without Losing Yours by Kevin Leman. Copyright © 2018 by Kevin Leman. Used by permission of Baker Publishing Group (http://www.bakerpublishinggroup.com).

Dr. Kevin Leman is an internationally known psychologist, radio and television personality, speaker, and educator. He’s a New York Times bestselling and award-winning author of more than 50 books, including The Birth Order Book and Have a New Kid by Friday. Dr. Leman has made thousands of house calls through radio and television programs, such as TODAY, Good Morning America, CBS This Morning, FOX & Friends, The View, and CNN. He lives with his wife, Sande, in Arizona; they have five children and four grandchildren.