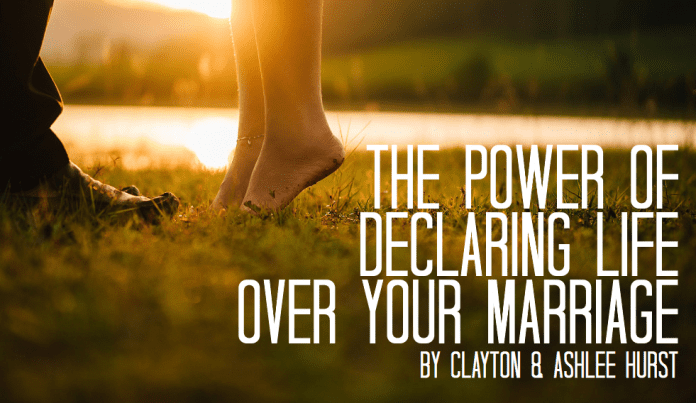 We’ve heard it said before that soul mates aren’t born, but created through the trenches of life. Like most couples, as we approached our wedding day, we thought we were soul mates and completely prepared for marriage. Our parents modeled great marriages to us and we assumed that we would have the same. During the first few years of marriage we began to realize we weren’t soul mates, and also feared we had made a terrible mistake in marrying each other. As the arguments became more frequent and the unkind words cut deeper, we slowly started our descent into a deep valley of hopelessness. We didn’t purposely head that direction, but before long we were in over our heads and didn’t think there was a way out.

At the time we were young adults and young pastors and didn’t feel like there was anyone we could talk to and felt ashamed to even ask. So we continued to pretend that we were perfectly fine.

We came to the tipping point in year five of our marriage and realized that if we didn’t make some changes we were destined for marital failure. It all began with a simple question, “Are you willing to do whatever it takes to have the marriage you’ve always hoped and dreamed of?” It was a simple question that was intended for another couple we were trying to help with their marriage. Oh the irony.

God used that simple question to rock us to our core. We had a question to answer and a decision to make. Were we going to look at our marriage and declare what we were experiencing or were we going to focus on the God of the impossible? With a mustard seed of faith, we both decided to gaze at the God of the universe and declare hope for our marriage!

” We had a question to answer and a decision to make. Were we going to look at our marriage and declare what we were experiencing or were we going to focus on the God of the impossible?”

It didn’t happen overnight but we both began to make small positive changes that impacted our marriage. It began with our words. We stopped criticizing and arguing with each other. We started encouraging one another more. We began covering each other in prayer instead of condemning each other. Instead of responding in a negative or sarcastic way when we felt hurt, we chose to respond in a loving way.

These were simple ways we began declaring life over our marriage.There were many times that the Lord would remind us of his Word. It reminded us how powerful words are in our marriage. In Prov 18:21 NKJV, “Death and life are in the the power of the tongue, and those who love it will eat its fruit.” It’s interesting that this scripture described our early years and now also our later years of marriage. In the beginning, we were declaring death over our relationship and we grew accustomed to eating the rotten fruit. When we changed and declared life over each other and our marriage, we started enjoying the sweet fruit that came from it.

In the fall of 2014, we were asked to help establish the Marriage & Parenting ministry at Lakewood Church in Houston, Texas. It was such an honor to be asked and we both knew it had the potential to become some of our greatest years of ministry together. We had come so far from those early destructive days of marriage and we had such a desire to help other couples. As we began to step out in this new role, we prayed that God would lead us and direct us in this new area. A few weeks into this new position, we were drawn to the book of Ezekiel during a morning prayer time. Re-reading the vision God gave Ezekiel about the valley of dry bones reminded us of so many marriages. It’s an accurate description of what happens when you aren’t declaring life over your marriage. It’s also an incredible promise of what can happen when you focus on the God of the impossible.

“Can these bones live again?”God asked. Ezekiel responded with, “Oh Sovereign Lord, you alone know the answer to that.” Ezekiel could have easily answered, “No they can’t live, they are dried out bones!” Because of Ezekiel’s response of faith, God said something profound for all of us to hear. He tells Ezekiel, “Speak to these dry bones…” God is reminding Ezekiel that there is power in the words you declare. God paints this beautiful picture of this once desolate valley now filled with an army marching out of the valley of death. We believe it’s also a great picture of marriages restored.

We will never forget that morning time with God as he showed us these scriptures. It was like we were reading them again for the first time. It was as if God was telling us that this was a picture of what will happen to marriages that are dry and dead. As couples begin to declare life over each other, God will blow life into the dry bones of those marriages and they will be restored.

Clayton and Ashlee Hurst are the marriage and parenting pastors at Lakewood Church in Houston, Texas. Married for more than 20 years, Clayton and Ashlee share a passion to see God breathe life into every couple they encounter, strengthening and enriching their family. Their book, Hope for Your Marriage: Experience God’s Greatest Desires for You and Your Spouse (Emanate Books/Thomas Nelson) is available now. They are the parents of three children and live in the Houston area.