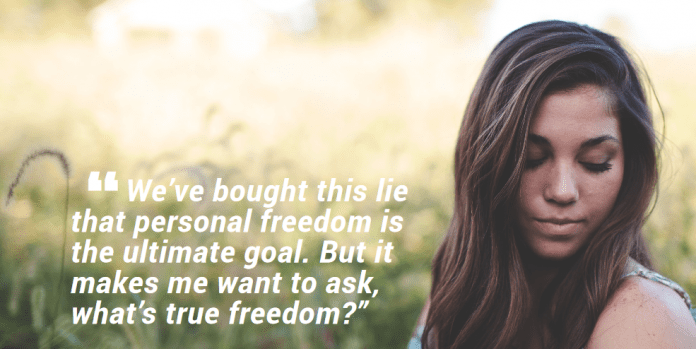 My generation seemed to really get the short end of the stick when it came to relationships, as there were really only two—admittedly stereotypical—extremes.

The first one is what I like to call the “do whatever you want” policy. Since the sexual revolution in the 1960s, our culture has had a distorted view of freedom, which plays out by basically making two rules—first, Do whatever you want and whatever feels good, as long as it doesn’t hurt anybody else. Second, don’t you ever dare to tell anyone whatever they are doing is wrong or could cause hurt, or damage, or not be the best for them.

This means that things that were unheard of before moved to being normal on a grand scale culturally, such as moving in together before you’re married and having sex on the first date.

And here’s where the church made a big mistake (of course I’m generalizing here, this doesn’t apply to every church or person, but the pervasive ethos of the day). They became reactionary and started defining themselves by what they were against instead of what they were for. Instead of the church driving the conversation about sexuality, dating, and marriage, we let the culture shape the narrative, and we responded.

If you kiss your boyfriend or girlfriend, you’re in sin. Your virginity is your identity.

Ladies, you can’t wear spaghetti-strap shirts (because it might cause a guy to go into a lustful rage by looking at a woman’s shoulder).

So, while “do whatever you want” was one extreme, the church created a second one. One that harbored an intensely legalistic subculture, that usually communicated the very opposite of Scripture (in other words, sex and desire are bad and the reason this country is going to hell in a handbasket).

We created a culture that made it more of a point to be a virgin than to be a genuine follower of Jesus. We created a culture that cared more about behavior in the bedroom than heart transformation and honoring God with your body, thoughts, and emotions.I’ve heard many stories of students at Christian colleges getting married at eighteen or nineteen so they can stop “burning with passion.” I’m sure there are tons of people who got married that young for the right reasons, but again, it comes down to motivation. The heart behind the behavior. I know many people who are products of the nineties’ evangelicalism who got married more to obey their legalism than because they thought they actually should get married.

I heard someone recently say that we are all refugees of the sexual revolution—the ideas and philosophies put into motion then have left many of us relationally bankrupt. But I’d argue that the same is true for a fundamentalist Christian standpoint. Many of us are refugees and runaways from the purity culture as well.

And so many in our culture believe this underlying narrative that, to be truly free, there must be no restrictions.

Don’t tell me sex should only be in marriage.

Don’t tell me what I can and can’t do with my body.

And people will ask us sometimes, “Can I have sex before marriage?”

Of course you can. You can do whatever you want. That’s just a bad question.

We’ve bought this lie that personal freedom is the ultimate goal. But it makes me want to ask, what’s true freedom? To me, true freedom has restrictions inherently built in. To have true freedom, you have to have restrictions.

I once heard someone say a fish is truly free in the water—where it can flourish, eat and live out its full existence. But if you take the fish out of the water and put it on land? It dies. The land isn’t freedom—the fish wasn’t made for it.

Or take the ultimate cliché of human adventure—skydiving. At the moment you feel most free, you are actually incredibly restricted. By a suit, straps, and a backpack with a parachute. Take off those restrictions? You die.

And for sex, that’s marriage.

Sex is incredible, life-giving, joyful, and intimate and doing exactly what it’s supposed to be doing—in a covenant.

But when it’s with someone who has made no commitment to you for life, it breeds death. Even though it may feel like freedom for the moment, just like the skydiver without a chute, sooner or later you will hit the ground.

Because the truth is, if we are letting our bodies say something (I want to be one with you) that our lives aren’t willing to (not married, so not fully one), it will backfire and short-circuit.Sex is too weighty. Too beautiful. Too incredible. To not be in marriage.When sex is distorted, it can hurt, damage, and confuse. When it’s done right, under a promise, in full transparency and vulnerability, it can mend, heal, and bring life.

Waking up next to girls whose names I didn’t know didn’t give me true satisfaction or wholeness. I was never seen. I mean, truly seen. The nakedness of the soul and spirit.

We all bring baggage into marriage. But we can also find true and immense healing in marriage. Marriage is the beautiful mystery of two people coming together to create one new entity. Of two people formed day by day into one new creation, one new image of God.

Jefferson & Alyssa Bethke currently live in Maui with their daughter, Kinsley, and son, Kannon. They are the authors of the books Jesus > Religion, It’s Not What You Think, and Spoken For. In addition to writing, they make YouTube videos and host a podcast that can be found on iTunes.