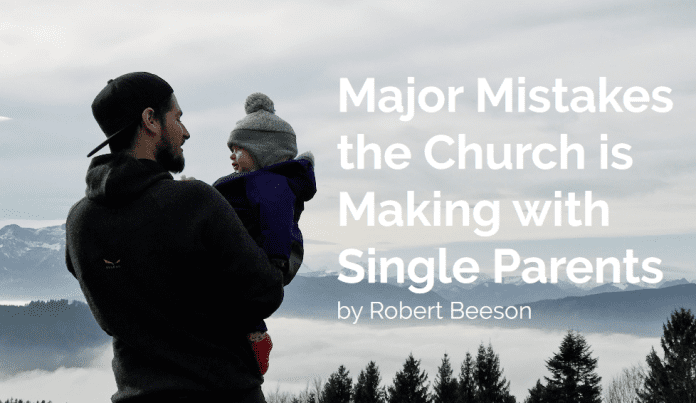 I hated Sundays. That was the day I was reminded I didn’t fit in anymore… anywhere. Once a vibrant part of the church community, I had loved joining my people, worshiping, taking in God’s Word, and recharging spiritually. But after my divorce, that familiar experience disappeared. Vanished. Now different, I fell from inclusion into seclusion.

My three young daughters and I walked into church alone. I felt their eyes on me, sometimes stares. I imagined their questions: Where’s the mom? What’s his deal? Who failed whom? Maybe some were thinking or whispering those words, and maybe they weren’t. Regardless, one thing I knew for sure was that my people had become those people. I was the odd one out in the pew. I didn’t fit, didn’t belong. Nobody actually said that; they didn’t have to. I just felt it. It was a horribly real experience of being treated like an outsider where I once was very much an insider.

One out of every three families in the U.S. is a solo-parented family. Sixty-seven percent of those families don’t attend church because 1) they feel judged and 2) they feel as if they don’t belong. They are now cast off, sometimes unknowingly and unintentionally, to search for healing alone.

My words here are not intended to convey contempt but rather sadness. I personally walked this solo road, and I have become close to many solo-parent friends who have had the very same experience. Different communities, different people, different churches, same outcome.

Solo parents in the faith community identify with the story of Hagar, Abram and Sarai’s slave girl who conceived from Abram (at Sarai’s suggestion) and then was cast off because she didn’t fit. Hagar’s solo parent life was seen as a significant complication to the community. “Sarai mistreated Hagar; so she fled from her” into the wilderness (Genesis 16:6). To be bluntly honest, our modern-day churches have viewed the complications of solo parents’ lives as a distraction from their usual ministry to families. They do not see these fractured and hurting parents and children as the “widows and orphans” that James talked about in his writings (1:27). But these are the very people Christ called the church to embrace.

” Until you have been on the other side of this silent prejudice, it’s just hard to see the chasm that exists.”

I do not believe the faith community is intentionally alienating this significant segment of our population. Until you have been on the other side of this silent prejudice, it’s just hard to see the chasm that exists. I also believe the church knows this group exists but just doesn’t know how to reach them.

We have now defined the problem, so here are two simple solutions:First, don’t just look at solo parents in your church but “look after them,” actually see them. These are people that walk a lonely and overwhelmed life every single day. Trying their best to be both parents, they feel like less than one. They are afraid, ashamed, and alienated, and everything that was once normal in their lives seems foreign. Relationships with family and friends that were at one time a shared support system often become strained and awkward. They go to sleep believing they are not enough, having lost hope just like Hagar, and they are desperate to no longer be invisible. “She gave this name to the LORD who spoke to her: ‘You are the God who sees me,’ for she said, ‘I have now seen the One who sees me’” (Genesis 16:13).

In his message “Forgiven Sin, Lingering Consequences,” Chuck Swindoll spoke to solo parents: “I apologize I have not said enough words to you over the years. You matter. You belong. We need what you bring to the body, to the family. We can learn from you.” That is exactly the restorative and redemptive connection that needs to take place between all Christian leaders and this community.

Second, the church should provide a safe place. When we started the Solo Parent Society at our church last year, we were at full capacity within one week of launching, with more than fifty attending. Two astounding facts about this response: 1) This new ministry had not yet been mentioned from the pulpit, and 2) 30 percent of the attendees had never been to our church. The news of a solo-parent faith community spread quickly and resonated deeply. Simply acknowledging the need and providing a place to belong was like opening a floodgate in the desert. The results have been transformational for those parents as well as the life of our church.

The hearts of solo parents are fertile soil. Their brokenness offers the perfect opportunity for the church to respond in God’s grace, redemption, and compassion and bring forth something powerful. But this movement begins with new eyes to see His “forgotten people” that are everywhere around us all.

Music executive Robert Beeson founded Essential Records and was a senior executive at Provident Music Group. He has worked with Jars of Clay, Third Day, Casting Crowns, Michael W. Smith and others. Beeson is the founder of iShine Records, a faith-based music/multimedia company geared to tweens. He is the author of Going Solo: Hope and Healing for the Single Mom or Dad. After seven years as a single parent, Beeson remarried. He lives in Franklin, Tennessee, with his wife, Barbara, and his three daughters and three stepsons. Robert also launched Solo Parent Society, a community for solo parents to thrive, not just survive.