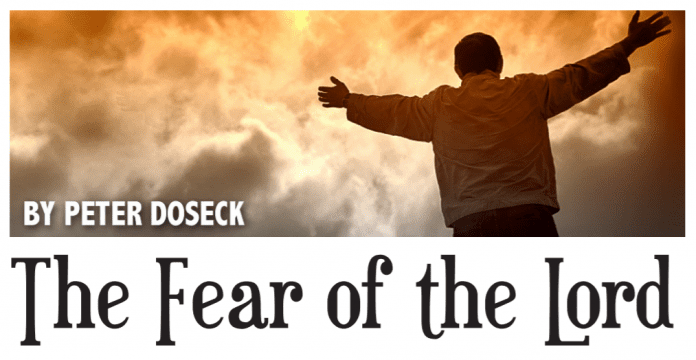 The fear of the Lord is a deep reverence for Him. It implies that when we fear Him we will prostrate ourselves before Him, surrendering our power and will, and becoming vulnerable with a humble heart. Simply put, when we fear God we give Him the supreme position of honor in our lives.

The fear of the Lord requires obedience. If we truly fear God, we will obey His every word and seek to pursue His every desire. This type of obedience surely requires that we live by faith and not by sight. To live by faith, the old man must be crucified so that only God may be allowed to live and express Himself through our mortal bodies. Not many can honestly say they live this way.

Most people who say they live by faith in reality are not living by faith at all. They are governed by their senses and nearly atheistic in their thinking and actions. This produces Christians who do not believe that God exists in a powerful enough way to do anything real in their lives. The Bible calls this having a form of godliness, but denying the power thereof.

Fearing God, loving Him, and walking in His ways will always end in your good. If you believe you have suffered loss when things are required of you in order to give God the supreme position of honor in your life, it is an expression of pride, faithlessness, and a form of idol worship.

Nothing you have, nothing you do, and nothing you aspire to should ever be regarded as more important than giving God His rightful place in your life. Nothing. If you give anything a place of preeminence above God, you will one day find yourself living as Israel did time and again, faithless and in bondage.

In Deuteronomy 32:20, God said He would hide Himself from an estranged Israel because He called them “children in whom is no faith”. How did the children of God get to this place? They arrived there because they stopped fearing the Lord. In other words, they stopped walking in His ways, loving Him, and giving Him the rightful place of supremacy in their lives.

When they stopped fearing the Lord it launched them into a habit of murmuring against God. They complained, discouragement came, and they backslid.

No one in their right mind would sin against God because He has the power to not only destroy the human body, but to cast the soul into an eternal hell. Sin only abounds when people leave their right mind by refusing to, or neglecting to, fear the Lord.

The Bible tells us not to forsake the assembling of ourselves together, but week after week Christians choose to stay home for any number of reasons rather than go to church. “I’m too busy.” “I need to work overtime.” “My kids don’t want to go.” “I stayed up too late last night.” Excuse after excuse, rather than the fear of the Lord.

Today, obedience is considered optional. We have Christians who prefer to watch their pastor preach from the comfort of their couch via internet rather than get up, get dressed, and get to the assembly as God commands. Technology is great for the times when you truly can’t make it to church, but it should never be used as a tool to enable you to live in disobedience.

I believe the lukewarm, half-committed state of the church is only the beginning of people losing their fear of the Lord. When more and more lose it, they will become more and more godless, which will infiltrate the church to an even greater degree.

When people fail to honor God, when they relinquish the assembling of themselves together in a local church, when they lay down using their gifts and calling for others, when they give up the faithfulness of a saint, the study of the scriptures, and the establishing of the soundness of doctrine, when they are lax rather than supporting one another, and when they choose to be less active in their church, it is a sign they have lost the fear of God.

The sad thing is, because people lose the fear of the Lord, they sell their children to the god of this world and to the idols of the world system. They remove the fear of God from their homes, and they promote other gods, allowing their children to serve them even as they try to maintain their Christianity in name only. This is unconscionable.

Let me remind you that we are not in this world. We are in the kingdom of God, and the world needs to see a church that fears the Lord!

Learning to Fear the Lord

We need to return to a reverential fear of the Lord that causes us to prostrate ourselves before Him, becoming powerless and utterly dependent upon His hand and His alone. We need a revival of fear in the pews before there will be a revival in the land.

Deuteronomy 17:18 tells us how this revival begins. It says: “And it shall be, when he sits upon the throne of his kingdom, that he shall write him a copy of this law in a book out of that which is before the priests the Levites: and it shall be with him, and he shall read therein all the days of his life: that he may learn to fear the Lord his God, to keep all the words of this law and these statutes, to do them.”

This was the command to every king who ascended the throne in Israel. This was to be the inaugural act of his kingdom reign. Before any law was written, and before any decree was enacted, the king was to be given a copy of the law so that he could read it and learn to fear the Lord.

The fear of the Lord is something we can learn. It is not a gift that comes to us, but it is a substance that is to be sought after. To fear the Lord we must seek, and we will find. We must knock, and it will be opened.

When you learn to fear the Lord, you will migrate toward walking in His ways; not selectively, but in totality.

It will not matter to you what will happen as a result. You will simply walk in the ways of the Lord, fearing to do anything else.

Our world today knows little about sacrifice. Most of us live on the backs of the generations who have gone before us to secure the freedom and the lifestyle we have become accustomed to. We have not lost blood for that which we have, but others who came before us did. They sacrificed their all so that we might have the things they only dreamed of.

How many mothers and fathers have worked their fingers to the bone so that their children might have a better life? How many guardians of the faith have labored on their knees so that we might walk in the goodness of the Word, in faith, in the gifts of the Spirit, and in miracles?

Who broke through spiritual barriers for us? Who won our freedom with their own blood? Where are those who are willing to give themselves as a sacrifice for others today?

In the service of God, sacrifice means that one extinguishes his life so that God may know that He is first. This is true sacrifice.

The Basis of Faith

The fear of the Lord is the basis of all faith. In other words, if you do not fear God, you do not have faith. You may think you do, and you may say you do, but your actions reveal that faith has no place in your life.

Hebrew 11:4-34 gives us a great accounting of the men and women of faith in the Bible who did great and mighty things with their faith. But then we hit verse 35, and we begin to read of those whose faith was just as great, and yet they had a different outcome.

What do we learn here? The fear of the Lord is the basis of all faith, and faith is nothing more than obedience in motion. Those whose outcome seemed like defeat are listed in the hall of faith along with those whose mighty acts are well-known. They are honored not because of the outcome, but because of the obedience and the fear of the Lord that empowered them to stand strong against all opposition.

This is the kind of faith we should teach our children; the kind of faith that causes us to be strong against all temptation, during all tragedy, and in spite of attacks, troubles, and trials of every kind. No matter what we face, the fear of the Lord must propel us to stand strong without wavering. What a testimony! What a faith!

May we learn to fear the Lord. May we pick up the Bible again and read itasakingonhisfirstdayonthe throne. We are called kings and priests unto our God. May we do as it is required of a king and set ourselves to read the Word, to believe what it says, and then to do what is required of us.

May we teach our children to fear the Lord. May we sacrifice and lay down our lives so that they may know Him, love Him, walk in His ways, and live in His abundance. I know it almost sounds cliché, but may we truly live as Christians, Christ-like ones, giving our all in service to the Lord.

Do you fear Him?