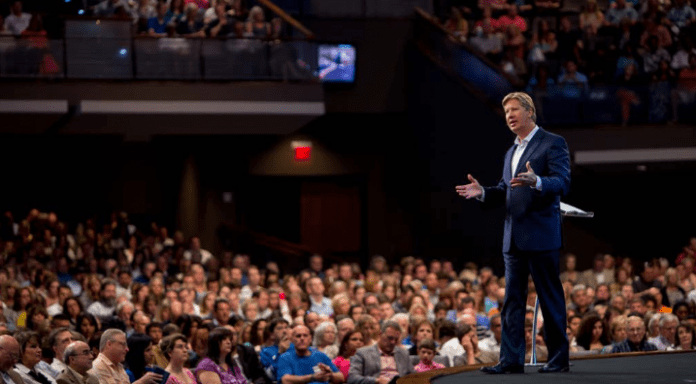 What was I going to do? I opened my underwear drawer, and there was only one pair left. What would I wear tomorrow? I couldn’t figure it out! My mind was so tired, I didn’t even think about washing some. It never even crossed my mind that Wal-Mart sold underwear. Then I opened my sock drawer, and it too was empty. I just sat down and cried! I know this sounds crazy, but I was so mentally and I supply of underwear and socks.

exhaustion—physical, mental, emotional, and spiritual exhaustion! What’s the answer? For me, it was as simple as: “Take the day off!” It was a simple principle that I had been violating for years, and it finally caught up to me. Many pastors have a day off, but they don’t take a day off! They don’t take the day off mentally or emotionally; therefore, they never rest. Let’s look at a few things God says about rest.

1. Rest is a command. It’s number four on God’s “Top Ten” list (Exodus 20:8–11). But why do so many ministry leaders feel like it’s OK to keep just nine of the ten? Read through the Ten are any besides number four that you would teach your congregation to ignore. Should we take God’s name in vain or have other gods before Him? Should we lie, steal, or commit adultery? Of course not! Why is the “day of rest” today? , are there consequences? And if we follow them, are there blessings?

commandments that carried the death penalty (Numbers 15:32–36; Exodus 31:14–15). And observing the Sabbath, a constant stream of busyness unbroken by periods of rest does slowly kill us over time—physically, mentally, emotionally and spiritually.

2. Rest is a blessing. Have you ever felt like you couldn’t make a decision or think clearly because you were so tired? When we don’t rest, . I because we’re just too

Exodus 31:17 says, “On the seventh day He [God] rested and was refreshed.” Those . ? physical body, this verse obviously refers to more than just physical rest. Literally, it means “to take .” After creating the world, God stopped and “took .” Likewise, the Sabbath allows us to stop and breathe—to restart our mind, body, emotions spirit. It’s a blessing, not a burden.

The elders at our church allow our pastors to take a four-week sabbatical every five to seven years. Three years ago, I was so worn out, I . The six-week sabbatical, plus two of my four weeks —a 56 days. I I could to not do anything, but I still didn’t feel rested. One morning near the end of my sabbatical, I suddenly realized, “I’m refreshed! I’m back to the way I was before I started the church five years ago. Lord, thank You! I’m finally refreshed and rested.” Then the Lord asked me, “How many days has it been?” I counted it up, and it was Day 53. And the Lord said, “You owed 52 days—one year of Sabbaths.” I responded, “You mean I owed You 52 days?” He said, “No, you didn’t owe Me. You owed you 52 days. See, Robert, the Sabbath is not for Me; it’s for you.”

3. Rest is a benefit. The title of Psalm 92 Sabbath. And in verse 10, the psalmist writes, “I have been anointed with fresh oil.” In other words, he’s saying, “Because I took a day to rest and honor the Lord, I’ve received anointing.” Is it possible that the degree of our anointing is also affected by whether or not we honor this principle? If we set aside a day for the Lord every week, would we be more anointed, refueled and refreshed?

We have services on Saturdays and Sundays, so I’ve had to choose another day to rest. But I used to always feel like I ought to be . great illustration to help me better understand . me, “Robert, your job is like driving a huge 18-wheeler fuel truck. And every week you go around to all these different stations and fill them up with the fuel from your truck.” In other words, my job is to give fuel to other people—; , the church; the church family itself and other pastors.

This is your job, too. You may have a different function or occupation, but you still need to have fuel for your family, your job, and your relationships. . But many of us decide we’re not going back to the refinery anymore, because it doesn’t feel like we’re accomplishing anything during the refueling process. We just keep driving from station to station, filling people up, because we . ? . . It refreshes and refuels. God didn’t create us for the Sabbath; He created the Sabbath for us … it’s for our benefit

days? Is it possible if you do it, you’ll reap benefits, and if you don’t, you’re going to reap consequences? Rest is part of God’s plan for you. He doesn’t want you tired. He really does want you to be able to rest. Take the day off!

Robert Morris is the founding Senior Pastor of Gateway Church, a multi-campus, evangelistic, Spirit-empowered church in the Dallas/Fort Worth Metroplex. Since it began in 2000, the church has grown to more than 36,000 active members. He is featured on the weekly television program, The Blessed Life, broadcast to approximately 100 million homes in the U.S. and more than 200 countries around the world. Robert holds a doctorate of literature and serves as chairman of the board of The King’s University. He is the bestselling author of 11 books, including The Blessed Life, From Dream to Destiny, The God I Never Knew, and The Blessed Church. Robert and his wife, Debbie, have been married 34 years and are blessed with one married daughter, two married sons, and six grandchildren. You can follow Robert on Twitter @PsRobertMorris.