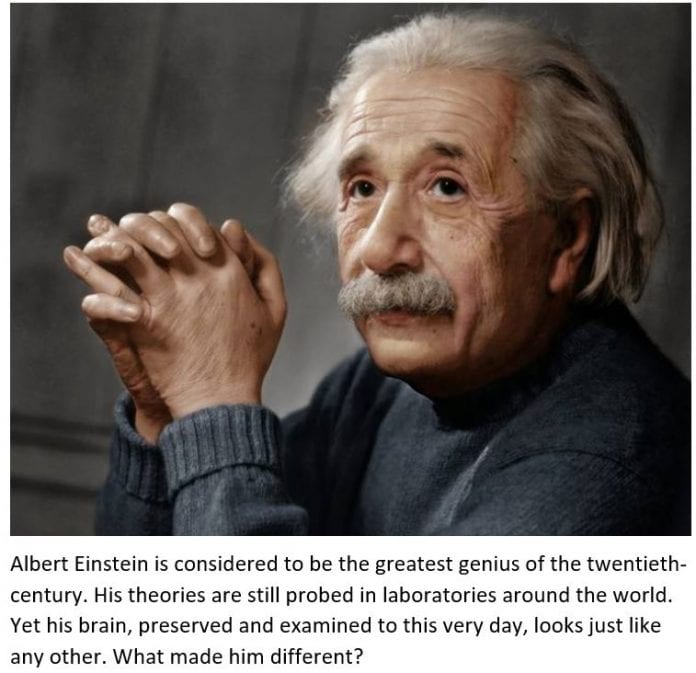 What makes the human brain such an elusive and mysterious machine? Over the past century, it has been the subject of a barrage of scientific investigation. Yet, no one has been able to discover its secrets. The pathologist who did the autopsy on Albert Einstein, kept his brain. Presently, it is being preserved somewhere in Kansas.

However, Einstein’s brain contains the same cellular structure as that of any other brain, No one has discovered anything different about his brain. Yet, he was recognized as the most incredible genius of the twentieth-century. What ability did he possess that ordinary men are lacking?

Where did his knowledge come from? How did he come up with the theory of relativity, the formula for the atomic bomb, or the mechanics of television? There are more questions than answers. Why has man failed to comprehend various fields of scientific design before this century? Earlier generations were mentally chained to the horse and buggy. Only in this era has mankind begun to advance in the disciplines of science and technology.

The answer, if there is a single answer, lies within the pages of the Bible. For example, Moses wrote:

“The secret things belong unto the LORD our God: but those things which are revealed belong unto us and to our children”
(Deuteronomy 29:29).

Whether or not the scientific community can accept it, most brilliant scientific discoveries have come from Jews. It appears that they really are a “chosen” people. Actually, technology is not discovered, it is revealed.

There are also verses which indicate that God is able to close off certain areas of human knowledge – to make it impossible for man to understand what Deity does not want us to know. Isaiah was informed of God’s ability to this. God instructed him:

This becomes a major theme throughout the Bible. Man is spiritually blind to certain eternal truths. His spiritual ears can be made deaf. Concerning the subject of prophecy, God told Daniel:

“But thou, O Daniel, shut up the words, and seal the book, even to the time of the end: many shall run to and fro, and knowledge shall be increased” (Daniel 12:4).

For many centuries, mankind has stumbled in the darkness of human frustration. Only in recent centuries has there been such an explosion of knowledge. So, why such an explosion of knowledge. So, why is this true? Were our ancestors so ignorant they could not figure out how to make an automobile, an airplane, a radio or television? Since the dawn of the Industrial Age, men have soared beyond the limits of normal human comprehension.

As a child, I sat in front of an old Crosley radio on Sunday afternoons, listening to the “Green Hornet” and the “Shadow.” I would watch the little green eye at the top of the dial and wish for the day when I could watch the Green Hornet nab those crooks. Television was only a dream in some laboratory.

Today, I can sit in front of a sophisticated computer screen and compose our entire magazine which will be printed in full color in just a few days. Our entire weekly television program is produced on another computer! Is this incredible or what!?

Who are we, anyway? Why was the Bible able to predict that a day would come when knowledge would increase? What made Albert Einstein so smart?

Is Genius a Function of the Brain?

Today, there are about 25 individuals who possess the ability to calculate math faster than an electronic calculator. There people can multiply five-digit numbers by five-digit numbers yet cannot tell you how they do it. Some of them have been brain damaged on the left side of the brain, somehow allowing the right side of their brain a special ability to perform great feats.

In the case of one man (I can’t recall his name), he can play any song on a piano after hearing it only one time. Is he a genius? He has an IQ of 40. Several of the math geniuses have Intelligent Quotients that range below 50. How can this be? Where does their ability come from? Just what is the brain? And how does it function?

My conclusion is that man is an eternal soul living inside the human brain. Before sitting down to write this article, I explored my consciousness to discover just where I exist within my body.

I could find no consciousness in the lower parts of my body – such as my hands or feet. All of my thoughts seem to be coming from within my brain. It appears that I am a soul confined to an area just behind and above my eyes.

What Does the Bible Say?

Knowledge is said to be a function of the spirit, while emotion is identified with the soul. According to the Bible, there is a difference between the two. Man is a trinity, consisting of body, soul and spirit. The writer of Hebrews declared:

“For the word of God is quick, and powerful, and sharper than any two-edged sword, piercing even to the dividing asunder of soul and spirit, and of the joints and marrow, and is a discerner of the thoughts and intents of the heart” (Hebrews 4:12).

There are several Scriptures which imply that emotion is a function of the soul, while knowledge is the primary focus of the spirit. For example, Isaiah wrote:

“With my soul have I desired thee in the night; yea, with my spirit within me will I seek thee early: for when thy judgments are in the earth, the inhabitants of the world will learn righteousness” (Isaiah 26:9).

In this verse, we are told that desire (an emotion) comes from the soul and that the spirit seeks to connect us with an eternal dimension. Later, Isaiah wrote:

“Behold my servant, whom I uphold: mine elect, in whom my soul delighteth; I have put my spirit upon him: he shall bring forth judgment to the Gentiles” (Isaiah 42:1).

In this verse, Isaiah tells us that delight (an emotion) is a function of the soul. God’s soul is pleased and His Spirit is “put upon” or connected to the Messiah.

Speaking of the work of the Holy Spirit, Jesus told His disciples:

“Howbeit when he, the Spirit of truth, is come, he will guide you into all truth: for he shall not speak of himself; but whatsoever he shall hear, that shall he speak: and he will show you things to come” (John 16:13).

The purpose of the Holy Spirit is to connect our souls to a storehouse of knowledge. He is a guide to convey to us what is true.

What He hears, He delivers to us.

We know that God made Adam from “…the dust of the ground, and breathed into his nostrils the breath of life; and man became a living soul” (Genesis 2:7).

On the other hand, we are told that Jesus was a “quickening spirit” – the source of eternal life.

There must be a big difference between soul and spirit. Your individuality is wrapped up in your soul. It is the seat of your will and emotions. You are a soul.

Now comes the difficult part. What I am about to say cannot yet be proven. It is, of necessity, a conjecture. But without at least some knowledge of the spirit, mankind is left groping for answers. Allow me to suggest the following.

The spirit appears to be a conduit that connects your brain to a storehouse of knowledge located beyond this dimension. It is both the conduit and the energy source that funnels knowledge to and from the files of your memory. It is my feeling that the brain is not the repository of memory. Otherwise, when the brain dies, both memory and consciousness cease to exist.

The brain must simply be a translator (like a modem) connected by the “spirit” to a gigantic (for lack of a better term) computer in heaven. Every thought you think and every image you see is being recorded. At the judgment, you will face the consequences of those thoughts.

What Is the Spirit?

In the Bible, we are told about the physical appearance of the Holy Spirit. He is described as a pillar of cloud by day and fire by night. In other words, he is at least a connection between heaven and earth, between God and man – an energy source that communicates between the two.

On the day of Pentecost, the Holy Spirit had the appearance of “…cloven tongues like as of fire.”Note that this “tongue” is a communicator. God’s Spirit comes to live with the soul in the brain of the believer – to provide a communication link between this body and our source of eternal life.

When the believer prays, that prayer is instantly recorded in heaven. It does not have to be transmitted to some distant galaxy. Prayer does not ride upon some electronic signal emitted by a 10,000-watt transmitter. Our brains are not transmitters. Yet, something links us to an eternal power source, located we know not where, to provide God the opportunity to communicate with us continually.

Written from the archives of Dr. J.R. Church – Founder of Prophecy in the News

About the Author: J.R. Church

J.R. CHURCH (1938-2011)- Founder of PITN Converted at age seven, J.R. Church set out with one main goal in life – to win others to Jesus Christ. He received a B.A. degree with a major in Bible and a minor in history at Tennessee Temple University in Chattanooga, TN. In 2001, he was given an honorary Doctor of Divinity degree from Immanuel Baptist Theological Seminary in Peachtree, Georgia.  His love for history gave him insight into God’s great “Plan of the Ages” and prompted him to pursue this field of prophetic research. J.R. and Linda were married for 52 years.  They have two children and five grandchildren. After pastoring a church in Lubbock Texas for 17 years, in 1979 he moved his family to Oklahoma City and developed the PROPHECY IN THE NEWS ministry. He has traveled across America many times lecturing on eschatology – the study of prophetic subjects.  He has hosted several tours to Israel and the Middle East. J.R. has authored eight books with chapters in several other books. Prophecy in the News publishes a monthly 48-page magazine as well as a weekly syndicated television broadcast which airs on stations across the country and via satellite network to most of the United States. Before he went to be with the Lord on March 22, 2011, after a three year battle with cancer, J.R. Church was convinced that Jesus Christ would return soon. He was famous for his saying, “KEEP LOOKING UP!” 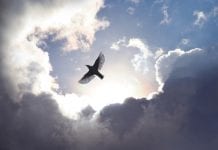 Dreaming through the Holy Spirit 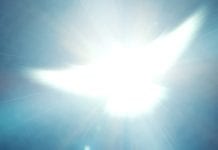 The Transforming Truth of the Holy Spirit