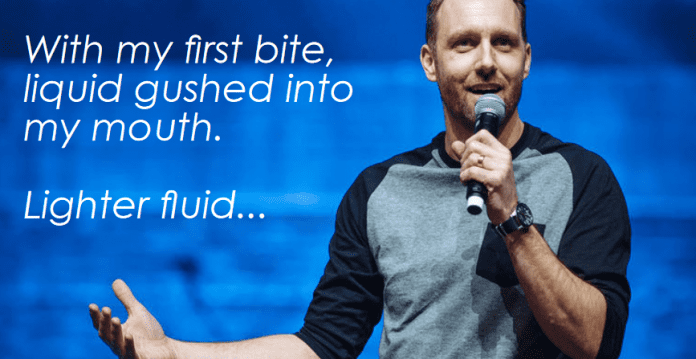 When I was dating my future wife, SeaJay, I thought I would be romantic and take her on a surprise date. I was working hard to convince her to one day say yes to me. I decided to put together a barbecue picnic and drive her out to a nearby lake. I made hamburger patties, prepared all the toppings, got the drinks together, borrowed a mini Weber grill, and picked up some charcoal briquettes and lighter fluid.

When everything was ready and hidden in the car, I picked up SeaJay and drove out to the lake. It was a beautiful evening, and the lake and the surrounding mountains looked gorgeous in the setting sun. For some reason (probably because I was twenty), I hadn’t thought too far ahead in my planning. While we were driving out to the lake, it suddenly hit me: the sun was setting and it would be dark. I hadn’t planned for a date in the dark.

I decided the best plan was to give up on the perfect picnic spot I had in mind and find a place to pull over by the lake. But mile after mile passed with the lake on one side and a forest on the other, and I didn’t see any place to stop by the lakeside.

I wasn’t going to give up, though, so I changed plans again. Instead of a picnic by the lake, I found a dirt road into the woods on the other side of the highway and pulled over. And by this time, it was pitch black outside.

“Well, I kind of planned a romantic evening,” I admitted. “We’re going to have a barbecue picnic by the lake.”

“Banning,” SeaJay said firmly, “I’m not getting out of the car.”

I’m not one to give up easily. Gritting my teeth, I said, “Okay, whatever. Fine. I’ll do it myself, then.”

When I opened the car door, the dome light came on and I saw SeaJay’s face. She was mad.

“We’re doing this,” I pressed. “This is going to be good and romantic, and you’ll enjoy this.”

Doggedly I pulled out the blanket, laid it on the ground next to her door, and began unpacking the food and setting up the grill.

“You’re really not going to get out?” I asked.

“I’m not getting out of this car,” she repeated.

My next task was to get the grill going and cook the burgers. It happened that I had always used a gas grill and never cooked on briquettes before. How hard can that be? I shook out the briquettes into the grill, doused them with as much lighter fluid as I could, and lit it. Suddenly, I saw exactly where we were. We were right next to a national forest with eight-foot flames shooting up from a grill, and cars were driving by us on the highway.

Nervously, I tried to shield the flames from view. Unaware that I needed to let the coals burn down before I could grill, and feeling increasingly panicked about my furious girlfriend and the idea that I might be arrested for starting a fire by the road, I decided, I’m just going to throw the burger on the grill now. I flipped the patties amid the flames and watched as they quickly cooked. A few minutes later, I whipped the burgers off the grill, slid them onto buns with all the toppings I had painstakingly prepared, handed SeaJay a plate through the car window, and sat down on the picnic blanket to eat my burger.

With my first bite, liquid gushed into my mouth. Lighter fluid. My burger tasted like I had marinated it in gasoline.

That was the moment of defeat. I turned to SeaJay and said, “Fine. We don’t have to do this. We’ll put it all away. Let’s go.”

I learned something important that night. There are certain things in life you can’t rush or manipulate. There’s a process to making a good burger, and if you try to rush it, you won’t get the results you’re looking for. The same is true of God’s root-building process in your life.God feels no pressure to rush or force His plan for our growth. He is calm, steady, and collected even when we want things to speed up. Our frustration will not make God speed up, because He knows we won’t get the results we’ve prayed for.

Over the years I’ve realized many people are having a hard time thriving where God has put them because they feel behind. I was thrown off by this in my own life. There was a little voice inside of me always letting me know I was behind. To this day I still have to stem the flood of questions that make me doubt myself and where God has me: “Am I behind? Should I be farther along?”

I read a lot of biographies in those days, and they all rein¬forced the idea that I was behind. I could tell you that Billy Graham was thirty-one when he met with a US president for the first time, that Martin Luther King Jr. was thirty-five when he won the Nobel Peace Prize. Thomas Jefferson was thirty-three when he wrote the Declaration of Independence. I read those stories and thought, Billy Graham was thirty-one when he first spoke with a president of the United States? That’s only two years away for me! I’m nowhere near any possibility of meeting the president. I’m behind right now. I knew it!

During this season of feeling behind, I picked up an older minister who was speaking at a conference at our church. On the drive from the church to the hotel, I asked, “What advice would you give young ministers?”

He didn’t even blink. “Oh, that’s easy,” he said. “I’d tell them to stop being in such a hurry to get to the inner place of anointing and to take time to die in the outer court.”

Let me explain what he meant by those metaphors. The tabernacle of Moses was the first house of worship in the Bible and served a prophetic role in teaching sinful people how to approach a holy God. In fact, much of the book of Hebrews is dedicated to showing how every aspect of the tabernacle ultimately pointed to and was fulfilled by the ministry of Jesus. The tabernacle was structured with outer and inner courts.

The outer court was the place where the priests made sin offerings on a bronze altar; the inner court was the place where the priests, each purified and clothed in priestly garments, offered incense and prayers to God for the people. As New Covenant believers, the outer court symbolizes our call to offer our lives as living sacrifices and renew our minds so we can learn to do the will of God (see Romans 12:1–2). It represents sanctification and character formation—learning to die to the flesh and walk in the Spirit. The inner court represents our priestly ministry—ministering to God through worship and intercession, and ministering to others through teaching and preaching.

The older minister was saying that young ministers have a tendency to rush ahead in ministry and avoid letting God work on their character. They get in a hurry to start impacting people before God has impacted them sufficiently on the inside. Resisting God’s root-building process sets them up for difficulties down the road, from ministry burnout to moral failures.

When I heard the minister’s words, a huge weight was lifted off of me. That’s what I’m doing, I thought. I’m in such a hurry to be out there changing the world that I’m not letting God take His time to shape and prepare me in the way He wants.

The minister’s simple words broke the power of fear and anxiety I had been living under because I felt so behind. Lord, I prayed, I don’t want to rush Your preparation in my life. No matter how long it takes, I don’t want that feeling of being behind to push me faster than I am supposed to be going.

It’s easy to compare where you are with where you want to be, and to feel a ton of pressure and fear to close the gap in between. But feeling like you’re behind and rushing to try to catch up are both off base and harmful. In fact, I’ll go a step further and tell others, “Don’t rush.” If you’re like me, you need to slow down if you want to thrive in the process. This is counter to our culture, but it is critical if you are going to allow God to develop roots in your life. No one can sprint a marathon. If you want to finish your race, you need to set your pace for the long haul, not a hundred meters. If you have a garden, you know you can’t really do much to speed up plant growth. Gardening is a slow process, and it’s easy to get bored and frustrated watering all the plants day after day. It can feel like it’s taking forever for anything to grow. But if you try to encourage the plants’ growth by watering them twice as long, you’ll kill most of them. Plants can only take so much water and nutrients, and can only grow so much in a day. The same is true for us. If we try to rush our growth, we’ll only destroy it.

Trust God to get you there in His time. God will get you to where He wants you, when He wants you there, and how He wants to get you there. If you’re not there, it’s because He doesn’t want you there yet. In our independent, “pull yourself up by your own bootstraps and make it happen” culture, the idea of letting God lead can seem disorienting. But no one can make a God promise happen. The One who promises is the One who fulfills.

Banning Liebscher is the founder and pastor of Jesus Culture and the author of Rooted: The Hidden Places Where God Develops You.To learn more about Banning, visit jesusculture.com.