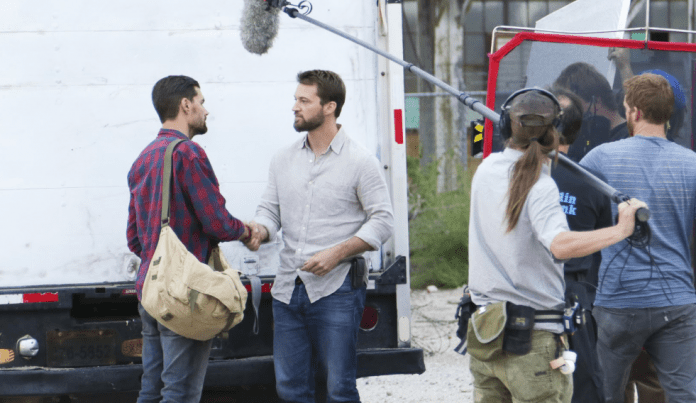 K: Joel, Luke, I think it’s awesome that you are taking a stand for women’s worth––and teaching others to do the same––by promoting the idea that “chivalry is not dead.” Let’s talk about that for a moment: When you say “chivalry,” what do you mean? And in what ways can men be chivalrous today?

J: One of the things that we have felt very moved to share about as a group is celebrating a woman’s worth and charging us as men to love extraordinarily. What does that really mean, when you put flesh to that statement in a modern context? Obviously, the first thing you think is opening the door for a young lady or sliding her chair in as she sits at dinner. I think if you drop down in a deep level, it’s beyond that: it’s a mindset of how we perceive a woman. Is our mindset, frankly, to connect with a woman for who she is, for her heart, to love her, to seek understanding, or is it more primitive? Is it to physically connect with her in a dating relationship? Chivalry to us is a romantic way to really respect, honor and love a woman well, but even beyond that with family, with our mums, our sisters, to really celebrate the beauty, the strength and the dignity of a woman.

K: What impact are you hoping to have in promoting the idea that “women are priceless?” And how are the concepts of a woman’s worth impacting the people to whom you minister?

L: We really hope to convey that we believe that women are priceless and to really change our mindset in the modern context. With all of the smart phones, billboards, movies and music– there is a seemingly underlining thread of ideology that a woman’s worth is found either in her figure or how she is received (or sometimes not received) by men. The real heartbeat of this Priceless movement is the fact that as humans, as ladies, you are image bearers of God – each unique in a radical way. Your definition as a young lady is not found in how your dress, what you look like or your connections with a man, but it is in the fact that you are loved and created wonderfully by God.

K: You come from a rather large family. How has that influenced your music and your decision to speak out for women in today’s culture?

J: My brother Luke and I, who make up the two front men of the band, come from a big family. We are a family of 7 kids, 5 boys, 2 girls, and our parents have been happily married for over 40 years now. When we were young and we first moved to the United States, we lost everything. My dad had been offered a job, and about a month after we got here he had lost the job so we really pulled together. As a family we raked leaves, we mowed lawns, our mum and our sister cleaned houses. In that time it really bonded us as a family. I think we greatly understood the significance of family and the family institution. This is why as young adults we’ve felt moved to share about the importance, the dynamic and the beauty of family. It goes hand in hand with our heritage as young men growing up in such a wonderful, God-fearing household.

K: Would you share with us some of the ways men can show their mothers and sisters that they are priceless?

L: As young men, one of the ways I feel we can truly love our sisters and our mothers is by rising above our circumstances and loving no matter what. Look, it’s easy to love when everything is easy, but when love is put to the test, when someone is not owning up or not loving you in the way you feel you should be loved– that’s the real moment when, as men, we can rise above and be chivalrous. In that moment there is a real opportunity.

K: You have a movie coming out this month, called Priceless: She’s Worth Fighting For. How did the concept for this movie come about…and what you’re hoping to see through its release?

J: Conceptually it came from two things: since we started touring, the band felt moved to share and celebrate a woman’s worth, charging us as men to be chivalrous in how we love. We partnered with our older brother Ben, who is a filmmaker, and he directed the piece. When we first started throwing around ideas for what this story could look like, he recalled a documentary that he edited years ago that had always stuck with him. We married these two concepts and we’ve come out with is a gritty drama thriller romance that charges us to be chivalrous and to celebrates a woman worth. We hope you can make it out on October 14th to see this dramatic story unfold.

K: You were both very active in the production of this movie. Was it difficult, as brothers, to work together professionally?

J: It was certainly a family affair–my brother Ben was behind the camera and in the directors chair. My brother Luke was one of the producers and my brother-in-law Cubbie, who is married to my older sister, was also a co-producer as well. People always ask how we navigated that journey as a family, we work really closely with family and it’s been a beautiful thing. I think in order to understand it, you would have to travel back to our teenage years. Our sister was an artist by the name of Rebecca St. James, and we joked that Dad needed cheap labor but he looked around and saw he had 5 sons so she put us all to work as a road crew. Through that time we really worked out as youngsters on how to collaborate and partner with one another. It’s been a beautiful thing in music and in movies now to have each others back, and the deep trust and understanding that you have with family.

K: You also just released a book in September––a novelization of the Pricelessmovie. Tell us a little about it. Where can readers pick up their copy?

L: Yes, along with the movie we also have a novelization of the film that goes under the same title. It released in stores Sept 6th. You can pick up digital and physical copies online and in stores! You can only tell so much in an hour and 37 minutes of filmmaking, but for instance, the first 5 chapters in the book unfold prior to where the film picks up. You get a deeper, wider, more sincere look at these characters. We encourage your readers to pick up a copy, as we are certainly proud of it.

K: Your new album, Run Wild, Live Free, Love Strongsounds amazing! Why the name for this new album? What does it mean to you?

J: Our latest project was written in a polarizing time. Luke had just gotten very ill with a digestive disorder, dropping, down to around 125 pounds, and had to come off the road. On the other hand, I had just gotten married. During this time of extremes, we took these stories into the recording process. Right as we were recording, Luke’s son, who at one point Luke was too weak to hold, was just learning to walk. He was amazed as he looked at his son, who has a lot of confinements–he can’t drive, he doesn’t have his own place, he doesn’t have independence, but inside these confinements he was so free. The song and statement came directly from experiences of witnessing his son being so liberated, but yet in the confinement of his parents love. It’s a beautiful metaphor between humanity and God, because when we live within God’s love, we can truly run wild, live free, love strong.

J: We’ve been a band for 5 years now and it’s been a really humbling and thrilling journey. A lot of highs and lows, and we’ve experienced some very special moments that you dream about as a musician. Whether it’s certain accolades or being able to perform on live television, as we look forward into 2017 we are always eager in some ways to go back to the drawing board of creativity in music. Our plan is to work on our third record in 2017, not to wipe the slate clean, but build off the foundation that we built with the first two records and to explore something fresh and new. We are writing from a position of joy, because I feel in so many areas in life we all have so much to be thankful for and we sense that particularly over the last 5 years. Who knows what will come of it, but our hope is to get in the studio and explore music and redefine the idea of joy.

K: Thank you, Joel and Luke, for sharing with us. We look forward to seeing how well Priceless does in both theaters and in bookstores. And we hope you will reconnect with us when your next album releases. We’d love to hear the backstory behind your song selections!