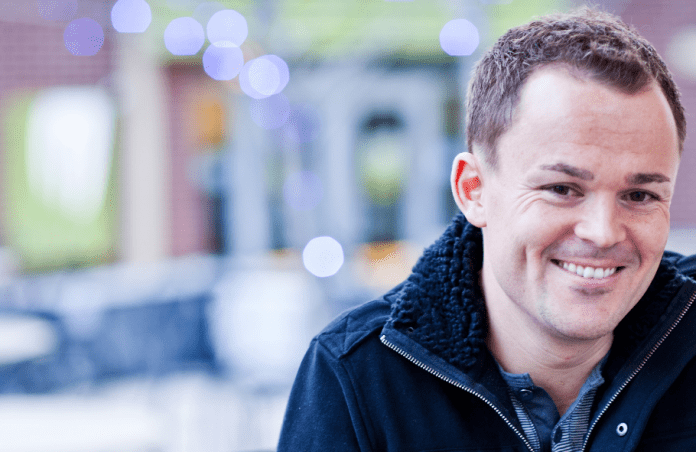 A few weeks ago, Tiffany and I took our three-year-old son, Truett, down the street to a neighborhood pool to play. There is a splash pad there that Truett loves, but he is always a little nervous about doing it alone. The fountains are unpredictable, and while he thinks getting soaked is fantastic, he craves a little more control over the timing of it all. As soon as we arrived, he started in on his “Daddy, come, Daddy, come!” spiel, and so I raced over to the pad and started chasing him around. There were three thick metal arches that also sprayed water, one about five feet tall, one six feet tall, and one seven feet tall. They fanned out and increased in height as you went—first the small one, then the medium one, then the tall. Truett and I fell into a routine of running in circles through all of the arches, dashing in and out of them probably fifteen times in a row. We were laughing hard by the last round, which is probably why I lost focus and ran right into the shortest arch. I took the turn too fast, my foot slipped on the wet surface, and bam, I nailed my head.

Lying on the ground completely dazed, I reflexively reached for my head—first, to make sure it was still attached to the rest of my body, and second, to see if there was any blood. As it turned out, there was blood. A lot of blood. My wife is a certified physician’s assistant, which is why I trusted her assessment that although I’d suffered a serious blow, I didn’t need stitches, a visit to the hospital, or a funeral (I can be dramatic). I was going to live, she said.

We headed back home after that, and in the ensuing days I got some good laughs showing friends and family the video Tiffany happened to be shooting of Truett and me when I had my personal America’s Funniest Home Videos moment. (Search #resetmyheadinjury on Instagram for proof.)

I look at that footage now and think, I wonder if that’s how it happens with sin. We’re cruising along in life—awesome, awesome, awesome, awesome! And then all of a sudden, bam!As we lie there, writhing in pain, we think, “Two minutes ago, I was having so much fun.”

In January 2000, VH1 put out a list of its top one hundred rock-and-roll songs of the millennium. Not merely a “best of” ten-year or hundred-year list, but a list covering a full thousand years. (Never mind that rock-and-roll didn’t exist before the 1940s.) The number-one song, beating out the Beatles, the Eagles, the Doors, and the Who, was the Rolling Stones’ “(I Can’t Get No) Satisfaction.” Admittedly, song lyrics were a little . . . um, simpler . . . in 1965, when this particular song was written. But still, you can’t help but notice in the refrain a strain, a deep-seated ache. “I can’t get no satisfaction,” it says. “’Cause I try . . .”

And still, satisfaction can’t be found.

If you’re alive and kicking, you relate to this ache. I do too. We have all tried, and tried, and come up empty in the end.

I caught an interview a few years ago with New England Patriots quarterback Tom Brady. This dude is the Great American Hero. He has Super Bowl trophies and is married to one of the world’s most popular supermodels. At the time of the interview he had already won three NFL championships and yet candidly said he still thought there was something greater out there for him. “I mean, maybe a lot of people would say, ‘Hey man, this is what is.’ I reached my goal, my dream, my life. I think, ‘God, it’s got to be more than this.’ I mean, this can’t be what it’s all cracked up to be.”Steve Kroft, the interviewer, looked at Brady and said, “What’s the answer?” to which he answered, “I wish I knew. I wish I knew. . . . I love playing football and I love being quarterback for this team, but, at the same time, I think there’s a lot of other parts about me that I’m trying to find.”

In Parade magazine sometime later, I saw a print interview with a reflective Shia LeBeouf, one of my favorite actors, in which he acknowledged his frailty and fear. “Actors live dependent on being validated by other people’s opinions,” he told the interviewer. “I don’t understand what it is I do that people want. I don’t know what an actor does. I have no credentials. I don’t know what I’m doing. . . . Acting is instinctual. The good actors are all screwed up. They’re all in pain. It’s a profession of bottom-feeders and heartbroken people.”Later, when the interviewer asked LeBeouf why he and his love interest hadn’t made it, Shia said, “Man, I have no idea. What was that all about? I have no answers to anything. None. Why am I an alcoholic? I haven’t a [expletive] clue! What is life about? I don’t know.”

Brady and LeBeouf aren’t the only ones who have searched in the wrong places for the answer to what will satisfy. Everyone tries and tries . . . and tries some more. I meet middle-aged men on their third or fourth marriage, still insisting that the answer is another fling. And binge drinkers insisting the answer is another night out with friends. And a thousand other people of every age and background, still insisting that the answer is more speed, more frequency, more hits, more highs, more hookups, more likes, more of whatever they’re hoping is filling the void that is too painful to admit they have. If they can just keep filling their lives full of distraction, they won’t have to face the fact that they’re dying inside.

Flip Side of the Fantasy

This is why there are just as many songs written about the emptiness that we experience after following the path the party songs so brazenly paved. Linkin Park sings, “All I wanna do is trade this life for something new.” Three Days Grace sings, “I need a change and I need it fast; I know that any day could be the last.” And then there’s Bruno Mars: “I would die for you, baby, but you won’t do the same.” The list goes on and on. Behind the catchy beats and cool rhythms is a universal, paralyzing pain. We know the pain all too well. The thing we thought would make us happy didn’t work, and now we’ve got a dilemma on our hands. How are we supposed to patch the gaping hole this terrible pain has left behind?

Long after the crowd had dispersed, on that night when Michelle handed me the razor blade, I spent some time alone in the stands, thinking about how she’d sunk to such desperate depths. Here was a girl who had youth, beauty, vibrancy, and potential on her side. She had friends. A family. People who wanted to see her succeed. And yet somewhere along the way she decided to thread that razor blade on a chain and clasp that chain around her neck. Day after day, she would unhook that chain and drag the blade across her arms and legs until her blood bubbled up and flowed, thin streams of self-hatred, self-disgust. She’d then clean the blade, rethread it through the chain, hook the chain around her neck, tuck the blade underneath her clothes, and move through her day in a state of numb despair, wishing for an escape hatch from this life.

The night after I met Michelle, I was speaking in the next city up the coast, and partway through my talk, I told the crowd about the conversation she and I’d had. As I explained what had happened with Michelle—her despair, her salvation, her new life—I (very carefully) pulled her razor blade and chain from my jacket pocket and held it up for the thousands gathered to see. And then I told them that regardless of what their darkness looked like, it too could be brought into the light. There was nothing too dark and too far gone for Jesus to reset.

From there, Michelle’s story went viral, and my team and I began to notice that those coming to later tour dates were entering the arenas with tangible evidence of their darkness and pain. We began setting out huge aluminum garbage cans we called “reset bins,” in order to collect the contraband. And toward the end of each evening’s event, I’d invite anyone who needed a reset in any aspect of life to come forward and either place their gear in the bins or write on a card what was tripping them up so that they could symbolically throw it away.

Each night I would stand by one of those bins, and I will never forget those moments as hundreds of students walked by me, tossing in their stuff. Knives, flasks, game controllers, pornographic magazines, iPods, bullets, miniature whiskey bottles, lighters, drug paraphernalia, condoms, cut-up credit cards, bottles of pills—icons of fun that wound up not being able to deliver on their promise. The items many carried and the stories so many told were shocking; but still, light was breaking in. In the midst of godless situations, God was moving.

Following the events, a percentage of those same people would approach me to talk about what they’d ditched and why it mattered to them. What struck me throughout those conversations was not how deviant or rebellious they were, but rather how these were normal kids trying to be happy, even as happiness refused to be had.

Bono isn’t the only one who still hasn’t found what he’s looking for; we’ve all searched in vain for that magic high, and we’ve all come up short in the end. And night after night on that tour, I stared at scores of bins overflowing with contraband reflecting our coping mechanisms of choice. The needles, the pill bottles, the booze, the porn—it was a generation’s way of screaming, “Save me from myself. I can’t take this anymore.”

The truth is we all want to be saved.

Reprinted from RESET: JESUS CHANGES EVERYTHING Copyright © 2016 by Nick Hall. Excerpted by permission of Multnomah, an imprint of Penguin Random House LLC.

Nick Hall is the visionary of Together 2016, author of Reset, and the Founder and Chief Communicator for PULSE. His passion is to “awaken culture to the reality of Jesus.” Since 2006 Nick has shared the Gospel with nearly three million students at PULSE and partnership events around the world.