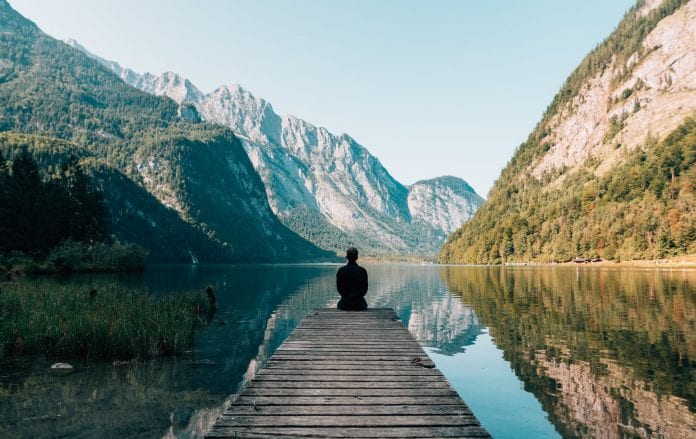 My brother, Todd, and I live on the same street. We share a lawnmower, and he stops over for a drink and to say hi to the boys a couple of times a week after work.

One night, Aaron was working and the boys were playing and Todd and I had a rare quiet moment, sitting alone together in the kitchen.

Something had gotten tangled up between Aaron and me that week. I can’t even remember what it was, but I made some comment to my brother about the joys of matrimony. He’s single, and profoundly independent. I know our messy, loud kid-house makes him half crazy.

Todd’s one of those people who’s done like a millionexciting things, among them, sailing around the world. He told me that people used to always tell him, “You’re so brave!”

He looked at me evenly while he spoke. “Sailing around the world isn’t necessarily brave. Leaving real life for two years isn’t necessarily brave. What you’re doing—what you’re building—I think that’s brave.”His words stayed with me after he left, after I tucked the boys in, after I walked through our little house, turning off lights, picking up toys, closing drapes.He was right, I realized. Brave doesn’t always involve grand gestures.

Sometimes brave looks more like staying when you want to leave, telling the truth when all you want to do is change the subject.Sometimes obedience means climbing a mountain.

Sometimes brave looks like building something big and shiny. Sometimes it means dismantling a machine that threatened to overshadow much more important things.

We’re addicted to big and sweeping and photo-ready— crossing oceans, changing it all, starting new things, dreams and visions and challenges, marathons and flights and ascending tall peaks.

But the rush to scramble up onto platforms, to cross oceans, to be heard and seen and known sometimes comes at a cost, and sometimes the most beautiful things we do are invisible, unsexy.

We love broad strokes, cross-country moves, kickstarter campaigns. But brave these days is a lot quieter, at least for me.

Brave is staying put when I’m addicted to rushing, forgiving myself when I want that familiar frisson of shame that I’ve become so used to using as a motivator.

Brave is listening instead of talking. Brave is articulating my feelings, especially when the feelings are sad or scared or fragile instead of confident or happy or light.

Brave is walking away from the “strike while the iron’s hot” mentality that pervades our culture.

Brave is being intentional about taking your marriage from “fine” to “can’t live without you.” Because fine is not fine at all. Fine is like a mesh sieve, enough space for all the important things to slip through, and all you’re left with is to-do lists and resentments.

It’s easier to be impressive to strangers than it is to be consistently kind behind the scenes.

It’s easier to show up and be a hit for an hour than it is to get down on the floor with your kids when you’re so tired your eyes are screaming and bone-dry.

It’s easier to be charming on a conference call than it is to traverse the distance between you and your spouse, the distance you created.

Sometimes being brave is being quiet. Being brave is getting off the drug of performance. For me, bring brave is trusting that what my God is asking of me, what my family and community is asking from me, is totally different than what our culture says I should do.

Shauna Niequist is the author of Cold Tangerines, Bittersweet, Bread & Wine, and Savor. Her newest book, Present Over Perfect, will release on August 9, 2016.Order your copy today: www.zondervan.com/present-over-perfect