Alexander was as intensively engaged with his guest as we were intently trying not to gawk.

But looking back, I realize that, as brilliant as “Seinfeld” was, Gruenewald turned out to be the bigger draw in the long run. The hit TV show’s 26.6 million average weekly viewers pales next to YouVersion’s 500 million downloads, which the app passed this month.

To further put this achievement in perspective, that is more readers of the Bible than the total population of the world when Johannes Gutenberg revolutionized the world with his printed Bible around 1454. Or think of it this way: About one-sixteenth of the world’s nearly 8 billion people use YouVersion.

“YouVersion surpassing the halfway point to a billion downloads is a major historic landmark,” Harry Hargrave, CEO of the Museum of the Bible in Washington, said. “Gutenberg changed the world with his printing press and 180 rather expensive Bibles. Gruenewald is changing ours with a few hundred million more, and they’re all free.” 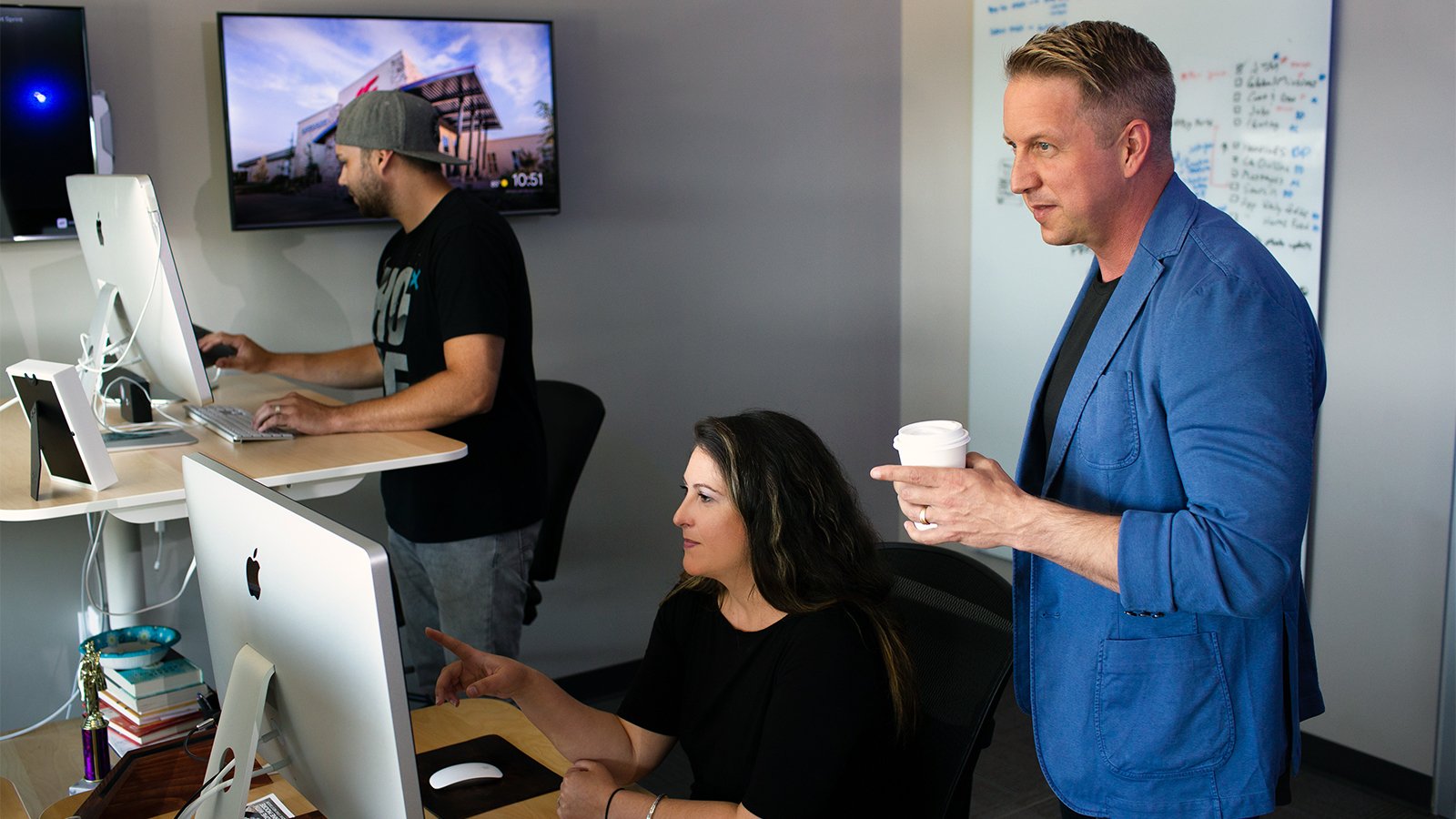 Bobby Gruenewald, right, innovation leader for Life.Church and founder of the YouVersion Bible app, works with his team in Edmond, Oklahoma, on June 26, 2018. Photo courtesy of Life.Church

Gruenewald deflects opportunities to take credit, praising his team and redounding anything miraculous to God. “YouVersion started with me asking the question: I wonder if technology could help me read the Bible more consistently?” he told Religion News Service. “At the time, I was a below average Bible reader, but I wanted to be more consistent. So, I thought more about how technology might help me and other people like me. … We just started small and God has grown it.”

He said, “It’s the Bible, not our app, that changes lives.”

Two factors have to be recognized in any accounting of YouVersion’s success. One is that Gruenewald and his team launched the app only 18 months after Steve Jobs released the iPhone on Jan. 9, 2007. The second is that YouVersion is free. “YouVersion was created as a ministry of Life.Church, which is a multisite church based in Oklahoma, and we want to steward it well,” said Gruenewald. “From the beginning, YouVersion has been noncommercial and 100% donor supported.”

It remains a significant fixed portion of Life.Church’s annual budget, and supported via 27 major partners.

At the Museum of the Bible, visitors can see actual pages from a Gutenberg Bible. A short walk away is the first iPhone to download YouVersion, which Gruenewald tracked down and donated to the museum. It is appropriately displayed embedded in a stylish white replica of the Gutenberg press and, in true geek fashion, an LCD backdrop keeps a running total of the app’s downloads.

Pages of a Gutenberg sell today for as much as $150,000. Will that 2008 iPhone fetch as much in a few centuries? It’s more than a financial question. As the adage among many Christian groups goes, “Only two things last forever, people and God’s word.”

(Jerry Pattengale, the University Professor at Indiana Wesleyan University, is one of the founders of the Museum of the Bible and author of the forthcoming “The New Book of Christian Martyrs.” The views expressed in this commentary do not necessarily reflect those of Religion News Service.)