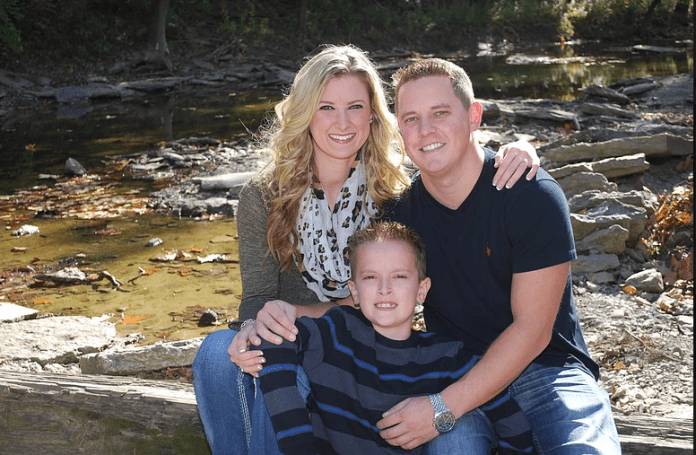 Q: You are a survivor of the Boston Marathon bombing. Can you tell us a little about that day and how that experience changed your life?

A: On April 15th, 2013 I was with a group of about nine people, watching a friend run in the race. I had never been to Boston and it was my 26th birthday weekend. My son Noah was five at the time, and had taken the trip with me. At first, we stopped at the 17 marker to track our runner (we had an app on our phones.) Then someone decided that we should get closer to the finish line so that we could actually see her cross. Noah had be-come increasingly bored, as the day wore on, and I decided to place him on top of my feet so that he could sit and play in the “rocks” until we were ready to leave. That was where Noah was when the first bomb off only about three or so feet behind us. Later I found out that decision is what saved his life. My own body was a shield for my little boy, and even though I lost part of my leg and had numerous other injuries, if it meant saving him, I would do it again in a heartbeat. What we witnessed that day was a true miracle.

Q: What does your life look like now? How is your family, what are you doing, etc?

A: My life is quite different now in both good ways and bad. I always say that my old world was left on Boylston Street, and it has been difficult to accept the new one to say the least. I am now one of the seven-teen amputees from that day, and sometimes the bravest thing I can do is work up the courage to leave my house. PTSD is a very real thing, and once you see what we did, there is no coming back from it. On the positive side however, I feel like I have been given an incredible plat-form to potentially en-courage others through the trials I have faced. I have realized how precious life truly is, and I want other people to be reminded that no matter what troubles they are facing, our blessings far outweigh our problems. And speaking of blessings, I have the most amazing support system who I owe everything to. My husband and two beautiful children keep me going, and because of them, giving up will never be an option.

Q: You’ve written a memoir in which you share your story— Taking My Life Back. Tell us what that title means and why you decided to write the book.

A: The title means every-thing to me. Taking my life back is what I feel like I am choosing to do every single day. I am deciding even on hardest ones to find their beauty and let my trials make me stronger. It is not al-ways the easiest thing to do, but it is always worth it. And believe it or not, writing a book has been dream of mine since I was ten years old. I never imagined that I would have so many crazy happenings to fill the chapters with, but that is why it has become so important to share them. If I can help someone else by sharing my raw-est moments, it gives my journey a little more purpose.

Q: Your journey began long before the bombing on April 15, 2013. Tell us about your childhood and some of the challenges you faced as a young girl.

A: I grew up in a very abusive home, where picking the wrong thing to eat first on my dinner plate had the potential to throw my biological dad into a complete tirade. He was an evangelist and traveled all over the world preaching, but his family got to see who he really was when the church doors closed. This gave me a very distorted perception of what Christianity was at a young age, and even though my father ended up giving us up when I was a teen, the message that I would never be good enough, has played a very prominent role throughout my life.

Q: Your mom was by your side nonstop while you recovered in Boston. What would you say is the biggest role that she’s played in your life?

A: My mom has played a big role since I was little. At one time, she was probably the only real reason I even believed in God. I watched my mom go through things no one should ever have to go through and it breaks my heart still to this day. But my mom has always been there. So it wasn’t a surprise that she took on the role of caretaker throughout my recovery. She has always been there to pick up the pieces, and I will always be eternally grateful for the privilege of being her daughter.

Q: You say your legs protected your then 5-year-old son Noah from the blast of the bomb. How is he doing? How has the trauma of the bombing affected him?

A: Noah is WONDERFUL. As a matter of fact, he is going out for the foot-ball team and running around like a normal nine year old. He definitely remembers what happened, but as time goes on, he thinks about it less and less. The fact that he was so young has been such a blessing, but we have both been in therapy for PTSD and there are times when I know that Noah is more cautious or nervous, because of what happened. All in all, he is one tough little cookie and I am so proud to be his mom.

Q: The bombing wasn’t your first close call with death. Tell us about what happened several years prior, and how it changed your life, too.

A: I have had several “brushes with death” in my life, but Boston has definitely been the icing on the cake. However, several months prior to at-tending the marathon, I was held up in a Walmart parking lot and robbed at gun point. I thought THAT was going to be the craziest moment….NOPE!Q: Two years after the bombing, you returned to Boston to run part of the marathon. Why? And what was that experience like for you?A: I decided that I was going to do everything on a fake leg, that I didn’t do on my two real ones when I had the chance. That was something I just had to do. And for me, it wasn’t about the number of miles, it was about crossing the finish line. That moment could never be put into words. It was one of the most triumphant moments of my life.

Q: If readers learn one lesson from reading your story, what do you hope it will be?

A: I want readers to find hope in my story, and as a result choose to live each day in a more meaningful manner. If I have realized one thing, it is that life is precious, and I’m ashamed that it took getting blown up by a bomb for me to truly start living each day, instead of just surviving a stressful routine.

Q: Where can our readers connect with you and pick up a copy of your book?

A: Readers can connect with me via Facebook, Instagram, Twitter and my website, www.rebekahmgregory.com and purchase my book through Amazon, Barnes and Noble, and other major retailers where books are sold. Thank you to each person that sup-ports me on this journey. You are the reason I continue to take my life back daily, and I look forward to meeting you at the finish line!