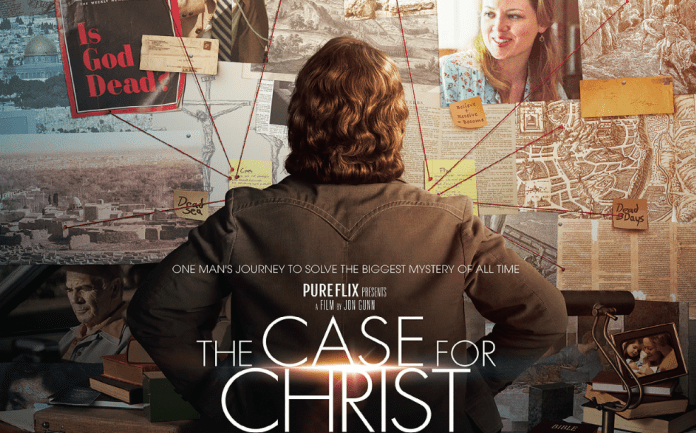 The Case for Christ, based on Lee Strobel’s best-selling book about his own journey as an award-winning investigative journalist and resolute atheist who sets out to disprove Christianity, comes to life April 7th in its big screen debut.

“The book The Case for Christ lays out the overwhelming foundation of evidence from which personal faith can rise,” Strobel said. “The film gives the dramatic story behind the story of a man with personal animosity for Christianity who used journalistic and legal techniques to evaluate its claims. The Case for Christ takes audiences on an exciting journey from skepticism to belief.”

Jonathan M. Gunn (DO YOU BELIEVE?) directs The Case for Christ, written by Brian Bird, (When Calls the Heart, Touched by An Angel) and based on Strobel’s book, published by Zondervan, part of HarperCollins Christian Publishing.

In 1980, after he won prestigious awards for investigative journalism, Lee Strobel (played by Mike Vogel) was promoted to legal affairs editor for the Chicago Tribune. When his wife, Leslie (played by Erika Christensen) became a Christian, Lee utilized his journalistic and legal training to disprove the claims of Christianity. Working as an investigative reporter would, Strobel interviewed leading scholars on Evangelicalism and Christianity, offering them an opportunity to defend their views. Contrary to his intent, Strobel’s investigative efforts convinced him of Christianity’s reliability. The book became a worldwide best-seller and launched Strobel in a new direction – defending Christianity himself.

Q: How well will The Case for Christ “reach across the aisle” to people skeptical of Christianity?

Strobel: This is a “safe” movie for Christians to bring their non-believing friends to see with them. There’s no “cringe factor” or “cheesiness” in the film. It’s a high-quality production with winners of the Academy Award, Tony Award and other acting honors. So I’m hoping Christians will take a risk and invite their spiritually curious neighbors, colleagues, and family members to see this film with them. I believe they’ll be captivated by the love story, the tale of a troubled relationship between a father and son, and the account of a spiritual investigation. My prayer is that thousands of spiritual journeys will be launched as a result of people seeing this movie.

Q: Brian, why make The Case for Christ now, for this generation of moviegoers? Are Millennials interested in apologetics?

Bird: I actually believe every generation is hungry for answers to their deepest existential questions: Is there a God and does meaning exist in the universe? Any seeker of truth, no matter what their age, would be remiss not to at least consider the evidence for Christ if they are being intellectually honest in their search for answers.

The reason I believe that The Case for Christ film is so relevant for today is that I would safely guess MOST believers in Christ don’t have a good handle on the evidence for their faith, and they definitely don’t know how to articulate what they believe. For them, this film will be an inoculation against doubt, but also a terrific appetizer of the avalanche of historical evidence for the crucifixion and resurrection of Jesus, and for the veracity of the ancient manuscript stream — evidence that very few Christians have studied themselves. Lee Strobel, the con-firmed atheist, realized after his deep-dive into the evidence that it would take more faith to stay in his atheism than it would to believe in Christ, and this film will also reinforce that truth for believers and skeptics alike. Plus, I think it turned out to be a really powerful and entertaining movie!

Q: Lee, I’ve heard you say that, that it would have taken more faith to maintain your atheism than to become a Christian. Can you explain that?

Strobel: I spent nearly two years of my life investigating the evidence for the resurrection of Jesus. I found that his death by crucifixion is historically indisputable; that we have a report of his resurrection — including named eye-witnesses and groups of eyewitnesses — that dates back to within months of Jesus’ death, too early to be a legend; even Jesus’ enemies implicitly con-ceded that his tomb was empty; and we have nine ancient sources, inside and outside the New Testament, that confirm and corroborate the disciples’ conviction that they encountered the risen Christ. To me, this constitutes an avalanche of evidence that the resurrection is an actual event of history. Maintaining my atheism would mean I would have to ignore these historical facts, but that was something I couldn’t do. As a journalist educated in law, I was trained to respond to evidence. The most logical thing for me to do was to take a step of faith in the same direction that the evidence was pointing and put my trust in Jesus as my forgiver and leader.

Q: Why should the Gospels be considered reliable sources on which to build the case for Christ?

Strobel: Actually, our earliest report of the resurrection came even before the Gospels. We have a creed of the earliest Christians that confirms Jesus died, was buried, and was resurrect-ed, and then it includes the names of eyewitnesses and groups of eye-witnesses to whom he appeared. The eminent historian James D.G. Dunn has dated this creed to within months of the death of Jesus. This is a veritable news flash of ancient history! It comes so quickly after Jesus’ death that we can’t blithely write it off as a legend.

As for the Gospels themselves, I spent years analyzing their historical reliability. Ultimately, I had to agree with what I was told by the great scholar Craig A. Evans, who has written, edited, or contributed to 50 books and has lectured at major universities around the world. As he told me: “There’s every reason to conclude that the Gospels have fairly and accurately reported the essential elements of Jesus teachings, life, death, and resurrection. They’re early enough, they’re rooted into the right streams that go back to Jesus and the original people, there’s continuity, there’s proximity, there’s verification of certain distinct points with archaeology and other documents, and then there’s the inner logic.”

Q: As the story translated to screen, what surprised you most?

Strobel: I was taken aback by the power of film to tell our story with such emotional punch and yet also creatively convey convincing evidence for the resurrection at the same time. The movie brings back so many memories of a tumultuous time in our marriage. My wife Leslie has seen it 10 times already. When I asked why she keeps watching it, she said: “Because I want to get ‘cried out’ so that when I see it in a theater in public I don’t embarrass myself by weeping.” So this is very personal for us. But we’re thrilled with the faithfulness with which Pure Flix has adapted our story to film. Even if it’s uncomfortable to see our lives depicted before we were Christians, it’s worth it if people respond to our story by starting their own spiritual journey toward Christ.

Q: How do you see churches, groups or individuals using this movie to start conversations?

Strobel: I hope Christians will take a relational risk and invite their spiritually seeking friends to see the film with them — and then go out to coffee afterwards and have a discussion about the movie. What character did they relate to? Have they ever considered the evidence for Jesus? These conversations will become the most import-ant part of the evening. And we have created many resources for churches to use in creating a campaign built around the movie — a perfect topic in the Easter season. We’re praying for all kinds of spiritual action to break out as a result of the film!

Q: You have a deeply experienced cast. Can you tell me about them?

Bird: I can’t say enough about our terrific cast in The Case for Christ. We have Academy Award-winning and Academy Award-nominated actors such as the legendary Faye Dunaway and the deeply respected Robert Forster, a Tony-winner in L. Scott Cald-well, and one of the top character actors working today in Frankie Faison. But this film is an epic love story as much as it is an apologetics mystery, and it’s Mike Vogel as Lee Strobel and Erika Christensen as Leslie Strobel who just knocked the whole thing out of the park. I wrote the words, but it was Mike and Erika, working with our amazing director, Jon Gunn, who brought it all up off the page, put those characters on their feet and made the film authentic and real. I can’t now imagine anybody else playing those roles.

We encourage you to use this movie as an outreach tool. Invite friends and family! Research shows that 35% of all people who see a faith-based movie are unchurched,* meaning the mov-ie theater is a safe place for them to seek answers about faith.