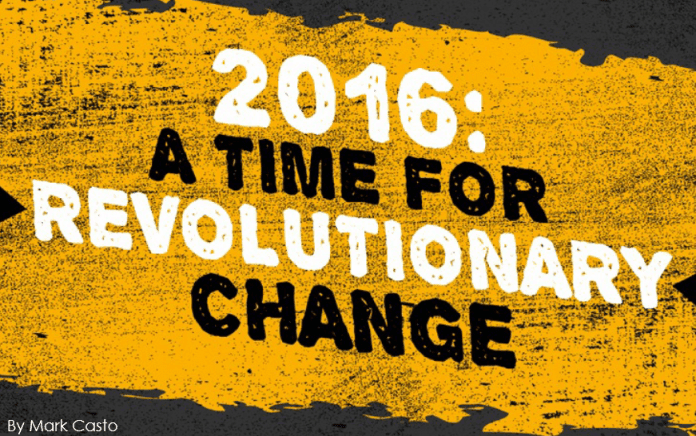 It was in March of 2015, standing in front of 5,000 young people, that the Lord told me, “The same revolutionary spirit that was upon our founding fathers in 1776 was upon this generation.” They cannot accept status-quo Christianity, they will not accept anything unBiblical, and they are casting off the tyranny of the glamorous “celebrity” version of following Jesus. This generation will not settle for popularity; it’s too low of a goal. They will not settle for material gain, because to forsake all is the call. They are delivered from the idea of good church and are pressing into Apostolic (Biblical) Christianity once again.

Revolutionaries are turning off the lights and smoke, and once again putting the cross of Christ at the forefront of our “stages.” This is a generation that will lay down their lives for the cause of Christ instead of laying down their souls for ministry success. The laughter of society only fuels their compassion for the lost, and the persecution of lukewarm believers only fans the flame of their red-hot devotion even brighter. The revolutionaries are here, so what are we going to do about it?

Revolutionaries are here to pioneer a new path of Christianity in America, and it’s time for those sitting on the sidelines to take their place. Like-minded leaders and believers must unite together in this hour, if we hope to see a Third Great Awakening and this generation reached. We must be authentic and genuine, breaking off from the political gifts-and-talents-based religion. We must embrace true discipleship, Biblical community, and radical evangelism. Apostles and Prophets must once again become the foundation of the church, while pastors, teachers, and evangelists must align themselves appropriately.

We must work together in unity to see cultural transformation. The saints must take their place in devotion and quit treating sermons as entertainment. The word of the Lord coming forth from your leaders is marching orders, equipment for a cultural battle of ideas and false idols. The Great Commission will not be the Great Omission of this generation. Now is the time: revolutionary change is the cry of Christ’s true disciples in this hour.

Revolutions are always started by a group of misfits–people who will not accept things for the way they are because they know there is a better way. We need people who want to do more than rock the boat; we need revolutionaries who will step out if it. We have had enough of people claiming to be visionaries who are comfortable in the box. We want to break the box, and live in the freedom and the glorious liberty of the sons of God. We need a people who don’t just go down the stream but those who will go against the grain.

They Are Clearing The Stage

It is obvious that our celebrity version of Christianity is not working. (Only a few men and women have been able to do this effectively. I honor them for it.) It has produced more scandal than fruit. It has made a mockery of true ministry and has tainted most of the world’s view of a Holy God. It has caused us to look weak in faith, rather than rich in faith. We preach the love of God, but can’t tell those who want to follow Christ that to love Him is to obey His commandments. We have paraded around gifted and talented people who can draw crowds, yet when these leaders are asked about important cultural issues, they have no back bone to speak the truth. We have traded truth for popularity and wanting everyone to like us.

They are clearing that stage. Revolutionaries refuse this weak version of Christianity that uses grace and love for excuses in worldliness and to disguise their pursuit of fame and fortune. What are we replacing it with? Voices crying in the wilderness. Men and women who will speak the truth, along with the powerful testimony of God’s amazing grace that has empowered them to live above the bondage of this world. They want leaders who will preach the holiness and majesty of God, the glory of taking up your cross to follow Jesus, and to be unashamed of the power of the Holy Ghost! They want leaders that will speak the truth, no matter the cost.

There is a Leadershift Coming!

We have a lot of pastors and church leaders, but we have few fathers. The days of just following a man with a vision is over. This fatherless generation is looking for the apostolic/prophetic order of the early church. We are moving from shepherd and sheep back to God’s original idea of fathers and sons. The goal of a pastor gathering God’s people in Biblical community is not merely to watch over God’s people as sheep, but to empower God’s people as His sons and daughters.

This generation will not submit themselves to selfish leaders who operate under a spirit of tyranny, thinking that everyone was born to fulfill their vision! Most important, they will not submit to leaders who do not model their leadership style after the characteristics of Christ and the fruit of the Spirit. They don’t care how gifted, talented, inspiring, or smart you are. They want leaders and fathers with strong marriages and families whose example they can model. We need leaders of integrity, honor, and courage to clear up the muddy waters of Christianity. God did not raise up leaders in churches to be served, but that they would become the servant of all. We are looking for those like Samuel, who will be a “faithful priest who shall do according to what is in God’s heart and in God’s mind” (1 Samuel 2:35).

Spectator Christianity is over! They are not going to come and just watch the one-man show do all the work for us. They want to jump into the game; they want to get their hands dirty. Don’t just do it for them, show them how to walk in the power of God. They aren’t interested in building a man’s kingdom; they want to build the Kingdom of Almighty God and that can’t happen with the one-man show. Jesus gave the church the gifts of Apostle, Prophet, Evangelist, Pastor, and Teacher to equip the saints so that the saints can do the work of the ministry (Ephesians 4:11-16). Those who are not willing to embrace the five-fold ministry, the team model of church leadership, will find themselves quickly becoming weaker and weaker. The personality-driven days of ministry are over. People want fathers in the faith and the five fold ministry, empowering them to fulfill their purpose in life.

The only way to see this revolution take place in the church is for every church leader and believer to take their place with an uncompromising commitment to a devotional life with Jesus Christ. I’m not talking about reading two paragraphs from a self-help book with scriptures sprinkled on top. We need to open the word of God and search for His ways in all that we do. It’s not good enough just to read, but from dedicated devotion we make a commitment to obey what we know to be true each and every day.

We need to cry out in prayer! Prayer is the only way we are going to see true change come to the American church. We can preach, teach, and gather all we want, but if we do not approach the throne of grace on behalf of this nation, we cannot expect revolutionary change to take place. Fasting is no longer an option–it is the necessary means to make us truly hungry for God. Fasting focuses our pursuit, unlocks revelation concerning God’s word, and causes our flesh to have to submit to our spirit.

If you are not willing to allow devotion to revolutionize your life, don’t expect to be a part of this revolution in the American church.

They are here; the revolutionaries are growing daily. Your once-a-week, Sunday-morning-only version of Christianity is about to be overtaken. The seeker-sensitive movement is going to be abandoned and emptied out by radical devoted followers of Jesus Christ. Our prayer meetings are getting stronger and exposing the sin of lack of prayer in dead church attenders. Our praise is getting louder, exposing the low-view of God that many Christians carry. Our worship is getting more intimate, exposing the lack of devotion in “Sunday morning only” church folk. Our preachers are getting bolder, exposing the average pastor’s fear of man and pursuit of popularity.

There is nothing you can do to stop the revolutionaries from returning to the original idea for church. They won’t wait on churches to organize missions and outreach for them. It’s who they are. They are givers, lovers, and evangelists, no matter if it’s across the street or across the world. You can either make room for them, or just watch these revolutionaries overtake the world with the power of truth, love, the gospel of Jesus Christ, and the ministry of the Holy Spirit.

If you find yourself burning for what I just wrote, it’s because you are a revolutionary! It’s time to gather together with like-minded leaders and believers. Let’s cast off the things that disgrace the image of Christ and find people ready to build what Jesus said the gates of hell could not prevail against!

Mark is recognized as Lead Pastor and Founder of “The Extreme” with OCI ministries in Cleveland, TN. Under the covering of Perry and Pam Stone, Mark is being used to gather a remnant of revivalists and reformers so that they can be equipped to be witnesses in all the earth. He is commissioning world-changers with the desire to reap a harvest unlike anything the world has ever seen! To learn more, visit markcasto.com.