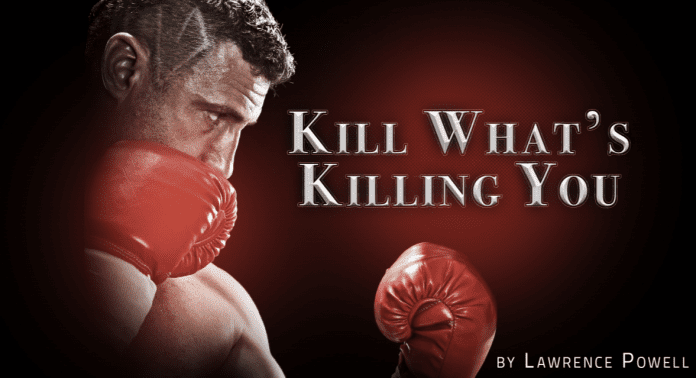 If we are honest, we’ll admit that we battle with sin. Some people think that if you are truly saved, you cease to struggle. The devil is a liar! 1 John 1:9 is written to the church, not the sinner. It says, “If you confess your sins, He is faithful and just to forgive you and cleanse you from iniquity.” A struggle does not indicate a lack of salvation. Quite the opposite! The things you used to do before you were saved were effortless. The fact that they’ve become a struggle tells you that your heart is made right in Him.

There is a progressive work in our salvation. Your spirit is renewed when you’re saved, but your soul, your intellect, will and the seat of your emotions, undergoes a daily process of sanctification. It is important that we remember that because there are some things that need to be worked out of us. It may be rejection, deception, addiction or lust or a variety of other failures. Whatever it is, expect the struggle and realize that God expects you to take authority over that thing.

I find it interesting in Numbers 33 that the Israelite’s were given divine orders to enter Canaan, drive out and destroy all of their enemies and their belongings. Drive them out and destroy them. Of-

ten, we want God to do all the work for us, but He leaves some things for us to do and empowers us to do so. Some destruction is left to you. Failure to destroy leads to constant grief. As we see in verse 55, “If you do not drive [them] out and destroy [them], [they] will become irritants in your eyes and thorns in your side.” They will vex you daily. They will be sent of the enemy to oppress you in his valiant attempt to bring you to ruin. In Joshua 23:13, we find a similar language stating that if you don’t drive them out, they will become snares and traps to you until you die.

The devil is not your friend. I know that’s elementary, but some people play with him like he’s harmless. He’s an enemy. His mode of operation is as the thief. He comes to steal, kill and destroy. According to John 8:44, the devil is a liar and a murderer. If you don’t recognize him as your enemy, you’ll watch movies with him, go out to dinner with him, be in association with him. He’ll masquerade as an angel of light, as if he’s from God, as if she’s from God. Yet when the mask is removed, you’ll see the poison.

In 1 Samuel 15, we read the prophet Samuel delivering an explicit message from God to Saul to destroy the Ama-lekites. “Spare nothing and no one. Destroy it all.” Saul chose to listen to the part of the message that suited his needs. Scripture records in verses 7-9 that he slaughtered the Amalekites and all they owned, but spared their king, Agag, and the best of the animals. He destroyed the worthless and kept what was good in his eyes, what he thought was advantageous for himself. Saul spared Agag. If you spare an enemy, it will inevitably turn and destroy you be- cause what you fail to master will eventually master you.

It’s dangerous to think you know more than God does what’s best for you, and there’s an inevitable danger in keeping what God told you to get rid of. Things may look good to you, but they’re not always good for you. The Omniscient One is all-seeing, all-knowing, and worthy of our trust.

When you walk in rebellion, it becomes easy to walk into other things like lying. Samuel came to Saul, and Saul assured him that he had followed the Lord’s command. Samuel said, “Then what is this bleating of sheep in my ear?” Every now and again you need a prophet to get in your face and tell you what you don’t want to hear. Samuel said, “You’ve made your will a god, and It’s dangerous to think you know more than God does what’s best for you. you’ve put it above the Lord. Now, the Lord says, ‘Because you have done this thing, your kingdom will be taken from you and given to another.’” Could it be that our continuous walk in rebellion will make God say, “I’m taking what I’ve given you and will give it to someone else?”

Saul became ruled by his pride, and this set the stage for a terrible fall. We see in the next chapter that he acted outside of his boundaries as king to offer sacrifices as a priest – something he was not qualified to do. Have you ever done something that God didn’t want you to do? Because Saul refused to find true repentance within, he went from worse to worse until he commit- ted suicide in battle.

My friend, you have to kill what’s killing you. This is a battle for your life. Learn from the mistakes of others. Romans 15:4 says that the things written in the Word are written for our instruction. 1 Corinthians 10:6 says that the recorded examples of those who missed the mark are for our benefit so that we won’t make the same mistakes. True, the battle is not yours, but that doesn’t mean you can just sit there and do no- thing. You’ve got to do something. You

have to kill what’s killing you! So how do you do that?

Don’t act like you’re too great or too holy. If you do, you’ll come to a quick fall, and it will be an eye-awakening experience for you. The Scripture says, “Let him who thinks he stands take heed lest he fall (1 Corinthians 10:12).” You need to recognize that there’s a vulnerability about you and take it to God openly and honestly.

Confess your sins. You need to confess your part in the matter. 1 John 1:8-9 says that “If we say that we have no sin, we deceive ourselves, and the truth is not in us.” We all sin, and we must do as James 5:16 tells us: “Confess your trespasses to one another, that you may be healed.”

Do all through Christ. Don’t think you can do this in and of yourself or you will blow it miserably. Philippians

Worship in spirit and in truth. Philippians 3:3 says that we are those who are circumcised in heart, and we worship Him in spirit. You must come, lay yourself before Him, and be delivered by Him. In that intimacy you will find deliverance, peace, salvation, healing and victory in overcoming what has been overcoming you by killing what’s been killing you.

What Does the Bible Say about the End Times?