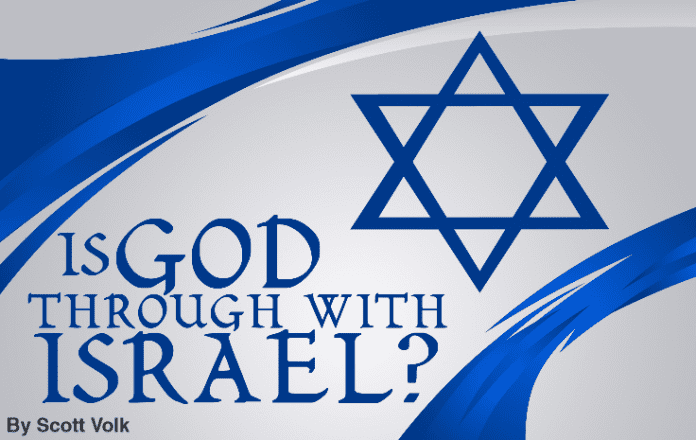 Imagine inviting your neighbor over for dinner and a sleepover. After serving them an incredible meal and allowing them to sleep on the most comfortable bed imaginable, they tell all their friends about the unbelievable benefits of spending the evening at your house. As word gets out about your amazing hospitality, you start opening up your home regularly to anyone who would like to experience your home, until, your family is far outnumbered by your guests. Then, one day upon returning from work, you find that your guests have changed the name on your mailbox. Not only that, they are now claiming that you no longer are the owner of the home and that the deed to the property now belongs to them.

Sound preposterous? Well, although it is an imperfect analogy, this is the unfortunate reality of what is being taught in much of the Church today. Non-Jewish people around the world are proclaiming that God’s covenant people are no longer the Jewish people but the Church. And, to add icing to that poison-filled cake, they’re also saying that all of the promises in Scripture that were originally intended for Israel now belong to the Church. In theological circles, this has classically been known as ‘replacement theology’. Many people, however, object to that terminology, choosing to use expressions like ‘fulfillment theology’ or ‘inclusion theology’.

Joel Richardson, in his book When A Jew Rules The World, puts it this way:

Behind all of the theological talk, ultimately, [replacement theology] is an unbiblical theology created by Gentile believers who, rather than being content with having been graciously welcomed into the people of God, after freely receiving God’s undeserved grace, feel the need to turn around and strip and dispossess the Jewish people of everything that has been promised to them by the God of Israel.

The notion that God is through with Israel has opened the door to anti-Semitism.

Since I don’t claim to be a theologian, I will leave the theological arguments for people who are much smarter than I. However, the natural implications of biting into this poison-filled cake and proclaiming that there is no longer any ongoing calling or election for the Jewish people is at best dangerous and at worst, diabolical. In this article, I’ve been asked to define the dangers of embracing this theology and I want to give you my top three as follows:

Replacement Theology opens the door to anti-Semitism and Jew hatred

The notion that God is through with Israel and that there are no longer any national promises that remain for the nation of Israel is the view that has opened the door to anti-Semitism and Jew hatred throughout the ages. Before going any further, I want to make this perfectly clear – I don’t believe that everyone who embraces replacement theology is anti-Semitic. However, I do believe that the majority of anti-Semitic acts, perpetrated by the ‘Church’ throughout the ages, were at the hands of those people who espoused some form of replacement theology.

You, like many, might say, “Well, the true Church, would never hate or persecute anyone.” And, I would wholeheartedly agree with you. However, to a modern-day Jew, whose parents and grandparents were ruthlessly murdered during World War II at the hands of church-going, cross-wearing people, there is no distinction between true church and false church!

Because our space in this article is limited, I’d like to recommend Michael L. Brown’s widely circulated book, Our Hands Are Stained With Blood for further study on the link between replacement theology and the role of anti-Semitism in the Church.

Although God makes covenant promises in Scripture that are based on obedience, there are certain promises and covenants that He makes that have nothing to do with the obedience of another and everything to do with His grace and mercy. One such unconditional covenant is the one He made with Abraham (Gen 12:1-3; 15:1-19). And, not only is the Abrahamic Covenant unconditional, it is also unilateral and everlasting.

In the times of Abraham, both history as well as Scripture confirm that animals would often be used as two parties would join together in the forming of a covenant. These animals would be sacrificed and their remains would be arranged opposite of each other on the ground in such a way that a path would be formed (Gen 15:9-10). Then, the two people making the covenant would walk through the path together as they vowed to uphold their end of the covenant, in essence saying “may what happened to these animals happen to me, if I do not withhold my end of the covenant.”

Those who view Israel as the\ would an\ other people group without holding a specific role in Gods redemptive plan are in danger of the trap of pride.

If Replacement Theology is true, then God has broken this unconditional unilateral promise that He made with Abraham by taking the promises away from Israel and giving them to another people, the Church. Paul went to great lengths in Romans 9-11 not only to share about his apostolic heart for his Jewish kinsmen but also to warn the Church that God is not, and never will be, through with Israel.

Replacement Theology is the breeding ground for conceit, arrogance and pride

Romans 11:25 is a remarkable passage of Scripture. In this verse, Paul clearly indicates that there are serious consequences that come if people are ignorant, unaware, or uninformed of the mystery of Israel. According to this verse, (depending on which version you read) the repercussions of believing that God has forever forsaken Israel and has now turned to another people will result in conceit, arrogance, and pride.

Based on these verses from Romans 11, I strongly believe that those who view Israel simply as they would any other people’s group, without holding a specific role in God’s redemptive plan, are in danger of the trap of pride. And, it is clear that God opposes the proud but gives grace to the humble.

My solution to the dilemma of replacement theology is for believers everywhere to pray that the Lord would open up their hearts to receive God’s heart for Israel and the Jewish people. I am grateful that we can rest confidently in the fact that God has chosen the Church of the nations (Gentile believers around the world) to provoke Israel to jealousy by carrying the glory of God to both Israel and the Nations.

Scott Volk is Messianic Jew who came to faith in 1975. After graduating from North Central University in Minneapolis in 1988, Scott has served in various pastoral capacities in Arizona, Florida, and North Carolina . After more than 20 years in pastoral ministry, Scott founded Together For Israel, a non-profit ministry that exists to partner with the Church for the salvation of Israel (Rom 11:26).

Scott and his wife Beth have been married for over 25 years and have a heart to see Jew and Gentile united as ‘one new man’ in the Messiah. They have five children and reside in Charlotte, North Carolina.