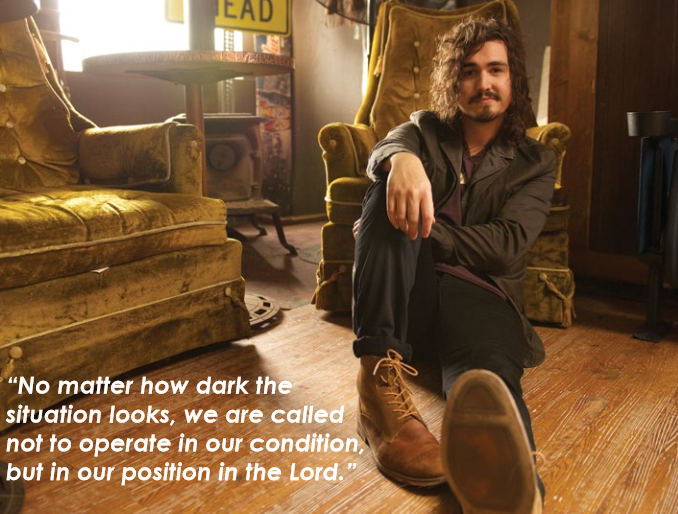 Kelinda: Jordan, thank you for taking the time to connect with me today. My nine year old daughter loves to dance and sing to The River, so I’m well acquainted with your sound! Can you tell me a little bit about your inspiration for The River?

Jordan: The River stemmed out of John 7:38. The verse says, “Whoever believes in Me will have rivers of living water flow from within them.” More than anything the song is an invitation. Maybe you feel like you have lived your life by the book, or maybe you feel like me and you have a ton of baggage and are a little ashamed and fearful of taking that to the Lord. But it truly is that opportunity to give all the things that are weighing you down to the One Who paid for it, to go down in amazing grace and to rise up being made new.

Kelinda: I understand that when you were growing up, your parents exposed you to many different genres of music, like Nat King Cole, the Commodores, and Bill Withers. Is there a particular artist that greatly inspired your music?

Jordan: There are definitely quite a few artists that greatly inspire me: One Republic, Earth Wind and Fire, Leon Bridges and Bill Withers, among others!

Kelinda: The story of how you and your wife came to Nashville is pretty amazing. You left California without enough money to make it past Phoenix. You couldn’t find a job. You discovered you were going to have a baby. Did you ever think you might have missed it, that you shouldn’t have left California?

Jordan: There were definitely several moments in the moving process I thought, “Maybe we just made the biggest mistake ever.” But in each moment of my second guessing, the Lord just brought the fire and poured favor on us. That trip really taught me how much God really desires us to go to Him and rely on Him. Since then we have been living in complete abandon, knowing that no matter how dark the situation looks, we are called not to operate in our condition, but in our position in the Lord.

Kelinda: What were some of the ways God showed Himself faithful to your family during this time?

“No matter how dark the situation looks, we are called not to operate in our condition, but in our position in the Lord.”

Jordan: One thing that was just insane, I was working as a valet in downtown Nashville at a place called The Listening Room. I was talking to my buddy David about how I didn’t think I was going to be able to pay rent, but I looked at David and said, “Man, I know that the Lord will cover us.” The guy who was waiting on his car overheard me talking and ended up writing me a check for $500 and said, “Man, you’re gonna make it. Keep your eyes fixed on Jesus and everything will align.” Needless to say, I might have cried a little with my wife that night in awe of how much bigger Jesus is than our finances.

Kelinda: Tell me about the project Beloved. What inspired you to write the title track?

Jordan: Beloved was inspired a couple of months before my wife and I had our daughter Jolie. I was sitting in a room with two other dads of little girls and we started talking about what the world was gonna tell them. There were a ton of negatives that came up with things like, “You’re not skinny enough,” “You’re not pretty enough.” Basically a message of no matter what a female does, she will never be enough for the world standard on women. I desperately want to change that. I want Jolie to know that not only is she immensely loved by her mother and father, but also by the Creator of the universe.

Kelinda: Have you begun writing new songs yet? If so, what flavors of music do they incorporate?

Jordan: Yes, I have! I actually have a new album that is coming out April 22nd, The River. I am so beyond excited to share my first full project and the new songs with everyone. I would say the songs have a lot of flavors that the EP Belovedalso had. I feel like I’m pretty true to who I am musically. If I had to give the flavor of my sound a name it would be ‘POP- SOUL.’

Kelinda: Well, again, Jordan, thank you for meeting with me. We wish you the best with your new project and can’t wait to hear it!

“I might have cried a little with my wife that night in awe of how much bigger Jesus is than our finances.”