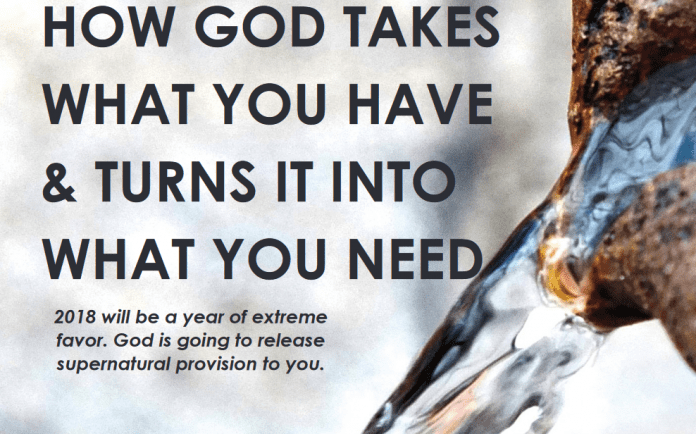 The first miracle of Jesus is recorded in John 2. Jesus and His disciples were invited to a marriage in Cana of Galilee. The mother of Jesus was there and when Jesus arrived she told Him that they had run out of wine.

“Jesus saith unto her, Woman, what have I to do with thee? mine hour is not yet come” John 2:4.

I find it interesting that the mother of Jesus answered His question with a bold statement of faith. She said to the servants that were standing nearby, “Whatsoever he saith unto you, DO IT” (v.5).

Faith is an action based upon a belief supported by a confession. Remember this progression. The ABC’s of Faith. A is action, B is belief, and C is confession. She said, “Whatsoever he saith, do it.” She believed that Jesus could do something about what was lacking.

There are some people who see lack and worry. The mother of Jesus saw lack and knew that Jesus could fix the problem. There is nothing that can happen to you that Jesus can’t do something about it!

What they needed was wine, what they had was water. Here we see this principle in action. Jesus told them to “Fill the waterpots with water” (v.7).

God takes what you have and turns it into what you need. The Anointing for provision was released when the servants obeyed the Word of God. Miracles flow out of God’s Word.

“So then faith cometh by hearing, and hearing by the Word of God” Romans 10:17.

Jesus told them to fill up the water pots and when they did what Jesus said then the miracle was released. You and I must find a word in the Scripture that covers our need and stand on it until the provision comes.

Recently, I received an e-mail from a person who was in great need. It was only two paragraphs long. The first paragraph said, “My money is not enough to cover my need.” They went on to explain how it was affecting them and the tremendous pressure that they were under.

“And he saith unto them, Draw out now, and bear to the governor of the feast. And they bare it. When the ruler of the feast had tasted the water that was made wine, and knew not whence it was: (but the servants which drew the water knew); the governor of the feast called the bridegroom, And saith unto him, Every man at the beginning doth set forth good wine; and when men have well drunk, then that which is worse: but thou hast kept the good wine until now” John 2:8-10.

When Mary, the mother of Jesus, said “Whatsoever he saith unto you do it,” then I think that we can examine what Jesus said before the water became wine to help us understand how supenatural provision is released for me and you.

He chose to use empty water pots. Their condition was not a hindrance, but merely what Jesus would use to meet the need. They had empty water pots and He would take what they had and turn it into what they needed.

Here is where the servants cooperated with the miracle of provision. God performs miracles through men and women who believe His Word. The book of Acts tells us how God worked through the natural efforts of the Apostles: “And by the hands of the apostles were many signs and wonders wrought among the people” Acts 5:12.

God works miracles through the lives of those who will believe Him.

When the servants came to the governor of the feast, he said, “Every man at the beginning doth set forth good wine; and when men have well drunk, then that which is worse: but thou hast kept the good wine until now.” John 2:10.

Your best is yet to come. Your future is secure when you place what you have into the Master’s Hands. God has planned a great life for you. Any lack that you may experience does not define who you are and what God will do for you!

What Is Around You Contains Your Miracle

There was a young man who was blind from birth. Jesus saw him when He was out walking one day. The disciples saw the blind man and asked Jesus,

I love Jesus’ answer. He told them it was not the sin of the parents or the boy, but that this was an opportunity to show the power of God in the young man’s life. After Jesus said this the Bible says that He spat on the ground and mixed the spit with the dirt and made clay and then put it on the eyes of the blind man.

He took what He had and for the blind man turned it into what he needed. Jesus worked with this principle. It will work for you!

Ted Shuttlesworth is an international evangelist flowing in the gifts of healing and prophecy. During his more than 30 years in ministry, Brother Ted has been given the opportunity to share the saving and delivering powers of Jesus with millions of people in attendance at his events and through missions work. Additionally, his television ministry, Faith Alive, reaches millions of homes worldwide each week in over 100 nations.