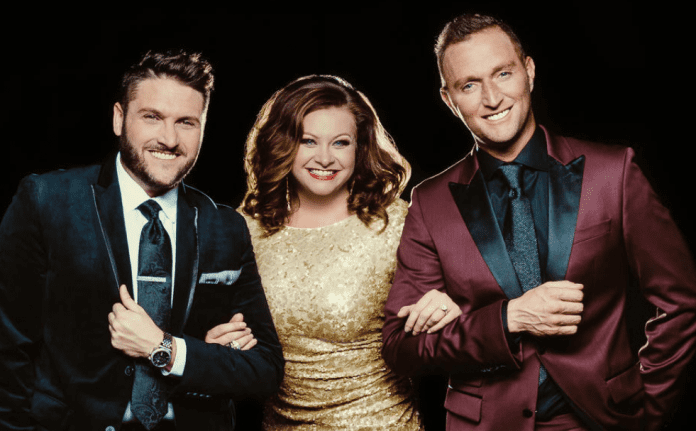 Kelinda: Each of you is a successful artist in his or her own rite. Can you tell me about the moment the idea crossed your minds to team up? Where did the idea begin and what were initial reactions to it?

Doug: Landon Beene (StowTown Re-cords) and I have been on vacation for the last 10 years together. When the kids are tired we always sit on the back deck and dream. Landon had a dream of putting an exclusive group together that he could use on his events. That’s where the dream of Cana’s Voice started.

Jody: For me, after being in a group for 13 years with Avalon, I really had no desire to join another. Landon Beene (IMC, Manager, etc.) contacted me and asked if I would be interested and my response was, “no, not really.” But then I met TaRanda and Doug, we talked about our past and our desire to do something more; beyond just good music. Something that would heal the broken and used up people, like us. I was being persuaded for sure. Then we sang together around a piano for three hours and it turned into a mini worship service. I knew God was in it. I’ve never looked back.

Kelinda: Each of you also has different styles of music, preferences, and backgrounds. How did you work through these differences during your recording process for This Changes Everything?

Jody: There really weren’t any differences to work through. Every song was agreed upon by each of us. Even though I have more of a pop back-ground, while TaRanda and Doug are Southern Gospel, we all have very eclectic musical tastes. We are all, actually, VERY similar.

Kelinda: Doug, what would you consider to be the best part of working together as a team?

Doug: I’ve always been a team guy. My life philosophy is that life is better when you all work together. We all have successful and established solo careers. We have each worked very hard for that. But, we are all group singers at heart. Like I said earlier, God has given us a chance to minister together as a team and that is much bigger than what we could accomplish individually.

Kelinda: Jody, who causes the most laughter in the studio? Who’s the clown?

Jody: Well, I think they’ll all agree that I’m the clown, even though TaRanda and Doug have awesome senses of humor. Laughter is something that we do VERY OFTEN. Being on the road for as long as we all have been, you have to have a sense of humor to survive most of the time.

“Everyone is broken, even our leaders. We all need spiritual encouragement. That is the goal of this group.”

Kelinda: TaRanda, it must be good to laugh after all you’ve been through. Your testimony is powerful! Would you tell us a little about it?

TaRanda: Yes! When I was suffering with depression after the passing of my husband, I remember staring at myself in the mirror and found myself pretty much unrecognizable. I began praying for the first time in a long time, and in the middle of my prayer for God to help me live, I remembered this lyric, “Great is thy faithfulness, O God, my Father; there is no shadow of turning with the; thou changes not, thy compassion’s, they fail not.” That moment of surrender was my turning page. From that day forward, I began to realize the depth of the faithfulness and love of God and stopped leaning on myself for perfect understanding. Even now, life is completely different again with my recent marriage and double the amount of children…raising pre-teens, blending a family… but we’re all surviving!

Kelinda: Your tour takes place in a number of great churches across the USA. Is there a trend you see among the leaders of those churches, some-thing that God seems to be stirring in hearts across denominational barriers?

Jody: People are pretty much the same as they have always been in the church. Hurting and seeking peace and hope. It is nice to see so many churches, especially the mega-churches, reaching out to those people in the way of Divorce Care or Single Mother support. A lot of things that were really taboo just a few years ago. Church seems to finally be settling into the idea that it’s more of a hospital than a museum.Doug: I think everybody is broken, even our leaders. We all need spiritual encouragement. That is the goal of this group, to witness and be a voice for the broken.

Kelinda: Has a particular church leader inspired you during your travels?

Doug: This guy may not be a mega church leader, but Wesley Pritchard is my pastor. He is making waves in his town at Fayetteville (North Carolina) Community Church, as he is so real with the way he deals with life and ministry. He is also a close friend and I can call him anytime.

Jody: The church that my family and I attend when we are home is called Grace Chapel in Leipers Fork, Tennessee. The pastor, Steve Berger, is a solid man of God with a true heart for his congregation. When I actually get to hear him speak, he encourages me to push harder into my calling.

Kelinda: How many performances have you given since you became Cana’s Voice? Which events have stood out the most and why?

Jody: Two years’ worth of performances, but not sure exactly how many. I know everyone will give a different answer, but for me our live recording at Champion Forest Baptist Church was an epic evening for me. The audience was with us from start to finish. The choir was amazing. More than anything, the Holy Spirit showed up and it became a perfect night.

Doug: We have only been touring for about a year officially. We have been blessed to be in the biggest churches across the country. They are all great memories, because honestly, we’re just having fun doing what we love todo. We did do a trip overseas to Nor-way and Sweden and the response there was mind-boggling.

Kelinda: Where are you going next?

Doug: We just played the Southern Baptist Metro One Conference and the Southwest Gospel Music Festival, and our tour with Mark Lowry ends this month. Other tour dates include Praise fest Branson, Mo., the Brooklyn Tabernacle Choir in May and an Alaskan Cruise with In Touch Ministries. Fans can check out Cana’s Voice complete tour schedule at www.canasvoice.com. We’d love to see you at one of our shows!

Kelinda: When can we expect a new album from Cana’s Voice? Can you tell us a little about the flavor of the songs in discussion for it?

Doug: We are currently picking out songs for the new project. I think the fans can expect more of the same worship style tunes with our flare. This is the fun part. We get to express our-selves. Honestly, I think if we record songs that speak to us, then they will speak to others as well.