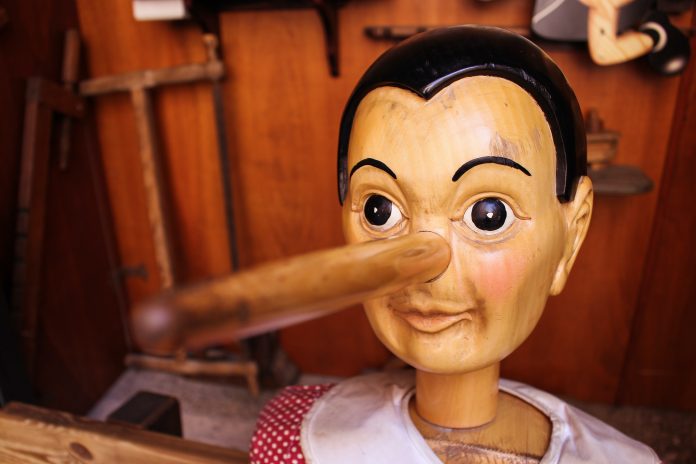 Perhaps the greatest crisis, among so many in our country today is that leaders, followers…EVERYBODY seems vaccinated against an epidemic of lying. Telling untruths is so ubiquitous that it’s expected and accepted.

French philosopher and theologian Blaise Pascal in the 17th century said, “Truth is so obscure in these times, and falsehood so established, that, unless we love the truth, we cannot know it.”

Not much has changed. For years I explored postmodernity and its foundations with my graduate leadership students. The hallmark upon which this philosophy rests is the elimination of Absolute Truth. Years ago it was coming; you could see it on the cultural horizon. Today it’s here. “Officially” proclaimed by the great philosopher Oprah Winfrey, “Your Truth” is all you have! She took the phrase mainstream during her acceptance speech when she won the lifetime achievement award at the 75th Golden Globe Awards in 2018. “What I know for sure is that speaking your truth is the most powerful tool we all have.”

My issue here is this: if you have a truth, and I have a truth, and all God’s children have their own truth, then — just as the postmodernists decreed — we no longer have an Absolute Truth. One standard by which to measure.

The Urban Dictionary defines the new cultural imperative (“your truth”) this way, “Pretentious substitute for ‘non-negotiable’ personal opinion. Often used by academics, this is a convenient phrase for avoiding arguments because people can contradict your opinion but not your ‘truth.’ The phrase is often used when seeking to justify a controversial personal stance or action because people are not allowed to argue with ‘your truth.’”

So our question is: Why do leaders lie so much? Why do any of us? Dissecting reasons for our pandemic of dishonesty, one must begin with motives. National Geographic compiled findings about why people lie and placed the reasons into four major categories.

· Self-Promotion — Researchers found that 44% of lies provide the liar with some perceived advantage or benefit outside of protection.

· Self-Protection/Preservation — 36% of untruths cover up a mistake or misdeed.

· To impact others — 11% of lies are intended to have some effect on other people: to hurt or damage, or to be polite in social settings.

· The Uncertain category (9%) — the liar really can’t determine a motive for their dishonesty. Or, their lying has become pathological (2%).

How do leaders lie? Consider these most “popular” types of lies:

· Bold or barefaced lies. These are the ones even children pick up on, they’re so obvious. When leaders’ lies are this apparent, you may rightly assume lying is SOP for them.

· Deceptive lies are carefully crafted with premeditation and their intent is to mislead. These are often more difficult to discern or detect. The Deceptive Leader is dangerous. Their motives must be suspect.

· Lies of denial are refusals to acknowledge the truth about something/someone. They are intentionally deflective. What’s being covered up? What don’t you want us to know?

· Exaggeration is by definition a false assertion that something is better or greater than we know it to be. Describing one’s company, efforts or self to be more attractive purposefully flaunts the truth.

· A polar opposite lie is the minimizing rationalization. When a leader can’t deny a truth, minimizing it or its ramifications is often employed.

· Ah, the famous lies of omission are those that intentionally leave out part of the truth. These are perhaps the easiest lies to tell. You don’t have to make something up; they’re passive.

The issues, beyond loss of an absolute standard, are legion. The effects and fall-out of lying are ruinous and at times, disastrous:

· The Betrayal of Trust — trust is elusive and essential. Once lost it is often nearly impossible to fully regain. Relationships, personal, professional or ephemeral (those we “believe” we have with politicians, celebrities and sports figures) are often so damaged as to now be beyond repair. And that loss of trust leads to cynicism and a generalized sense that no one can be believed. Ever.

· Displays a lack of respect — leaders who lie to their employees truly believe that their messaging is far more important than truth telling. And because the leader so important to the overall viability of the enterprise, the benefits of lying far outweigh the risks of honesty.

· Loss of a moral compass suggests that a leader has no true north. No starting point from which to base his life, career and reputation. And worse, that leader has most likely inculcated his entire organization with the virus. Top tier leaders follow the supreme leader. Department heads follow VPs, etc., etc., etc. All the way down the chain of command. Distortions and lies become the organization’s ethos.

So what are we to do? Sit back and accept that liars are here to stay? Should we resort to cynical disbelief forever? How can we help the chronically lying leader to change? Or can we?

· We could adjust Nike’s slogan a bit: Just STOP it! Pragmatically and experientially however, we don’t believe that’s possible.

· Find and agree with a source of Absolute Truth. This one’s tough, but I argue, essential. For people of faith, their source is the Bible. Wherever you place your trust as a foundation for truth, you must be convinced that truth-telling is an irreplaceable and essential life tool. That all communication going forward must be the truth, regardless of the fall-out.

In his recent book, “Live Not By Lies,” author/journalist Rod Drehr explores what he describes as the coming of a “soft totalitarianism.” Based on the personal accounts of hundreds of survivors of the Soviet occupied Eastern Bloc, Drehr heard this antidote from recent history.

Living within a political system designed and reliant upon full-time official lying, survivor after survivor described the vital importance of the family unit and a small but trustworthy group of friends. It was within these safe confines that Truth was upheld, rehearsed and used as a plumb line to evaluate the proclamations of their oppressors.

Appropriate prescription for us today. While we may not (yet?) be living in a totalitarian state, we must, as Pascal prescribed, find and love Absolute Truth and use it to measure everything else against that standard.