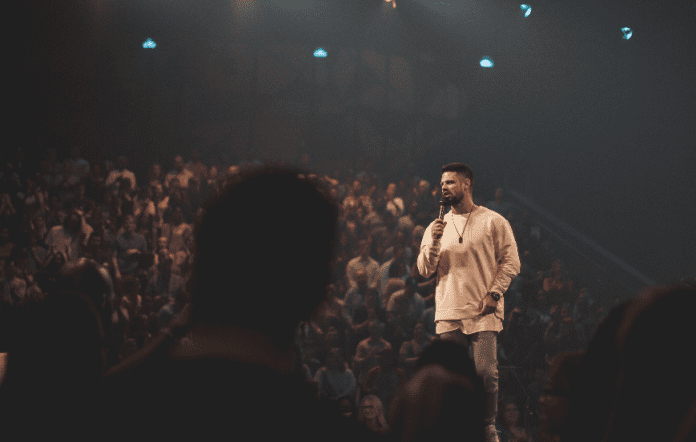 In 2014 my dad died of ALS, also known as Lou Gehrig’s disease. What the disease did to his body is very difficult to describe if you have not personally witnessed it.

What it did to his relationships was even worse. A pattern of my dad’s verbal abuse and threats toward my mom resulted in my dad leaving my mom, and living on his own, for a period of months. He refused all of our attempts to arrange a place for him to live close by so we could help care for him. And when we would pay for someone to come and care for him, he would find a reason to fire them every time. These dark months included repeated threats from my dad toward us and himself—and a downward spiral that made me wonder whether we might end up killing him before the disease did. I say that humorously, obviously, but hopefully the exaggeration underscores how dismal our hopes of reconciliation were.

The turning point, as I now see it, came when my dad’s health had deteriorated to the point that he was no longer dangerous to my mom. She made the decision to convince him (and allow him) to come back and live with her so that she could care for him in his final days. The process was slow, and I’m not saying everything healed perfectly. However, I can say that our family was able to experience the last several months of my dad’s life to¬gether. It wasn’t always pretty, but we were able to be by his side until—and through—the very end. Actually, some of those moments toward the end proved to be the most memorable and beautiful of my life. One in particular I’ll never forget.

On that weekend I had preached my sermon at our Saturday night service and then preached it again for our 9:30 a.m. service on Sunday. Normally I would have preached it one last time at 11:30 a.m., but something told me not to stay for the 11:30 service. I instructed the team to play back the video of my sermon for the different locations where our church meets. Then I left in my car.I didn’t know where I was going. At first I headed toward my house, but while I was en route, something told me to go to my parents’ home instead, which was only a few miles from my own.

When I got there, my dad was pulling up the 11:30 worship experience online to watch in his bed. He had long since passed the point of being able to come to church, but he never missed a sermon on his iPad, which my mom had rigged to the side of his bed where he could mostly control it.He was confused when I walked in. “Wait, if you’re here . . . Who’s preaching?” he asked.

I said, “They’re going to play the video. I’m going to watch it with you.” I sat on the bed by my dad and watched myself preach. It was a little awkward but mostly very special. There had been a point during our relational standoff where he gave me an ultimatum in anger.

“If you really cared about me, you would cancel one of your preaching engagements and come spend time with me.”

I remembered him having said that as I was leaving that day, and as he was giving me a few pointers, but mostly telling me how much he enjoyed watching me preach. I remember that day’s conversation pretty vividly, because it would be the last coherent conversation I would ever have with my dad. That night my mom called me and said, “He doesn’t have long. Get over here now.”

He died a few days later with his family by his side singing his favorite hymns like “The Old Rugged Cross,” “Jesus Keep Me Near the Cross,” and “Bad Moon Rising” by Credence Clear water Revival. Hey, it’s kind of a hymn.

I was reading him a sermon by Charles Spurgeon called “The Peculiar Sleep of the Beloved” when he took his last breath. It was a surreal experience, compounded in significance by the complications surrounding it.

I’ve thought a lot about my dad’s death and how my faith helps me to interpret it.

Literally for years, I prayed for God to heal my dad’s body. Healing—that’s the thing I wanted. That’s the thing I thought we needed. That’s the thing I couldn’t stop wishing for, even as I wondered why it wouldn’t happen. You could say I thirsted for it. And in an eternal sense, I do believe God healed my dad. In heaven he doesn’t have ALS or mental disorders. I believe he watches me preach on heaven’s own livestream, where there is never any buffering.But of course that isn’t the kind of healing I had in mind while I was praying. So what did God have in mind?

I don’t believe God gave my dad a disease or took pleasure in his suffering. But I’ve begun to think there were some reasons behind why God did not heal my dad in this life. I can’t see it all, but I sense there’s meaning there, probably many layers and angles of meaning. I know it was healing for years of relational stuff when my mom made the decision to welcome him back and care for him in his dying days. I know I had to get past some of my own pride to be able to reconcile with my dad. Some things that needed to happen, happened because my father wasn’t “healed” the way we asked for.Just like my father in his illness, and just like Jesus dying of dehydration and asphyxiation on the cross, we all have distresses in life, both physical ailments and emotional troubles. Those of us who are on spiritual journeys are not immune to the effects of living in a fallen world. And in fact, we may have additional hardships that others don’t because we are targets of persecution and spiritual attack.

What are your troubles?

What do you thirst for?

“I am thirsty for this illness to end.”

“I am thirsty for my marriage to get better.”

“I am thirsty for respect.”

“I am thirsty to do something that matters.”

“I am thirsty for my son to get his life together.”

“I am thirsty to defeat my addiction.”

“I am thirsty to find a boyfriend.”

“I am thirsty for the pain to go away.”

“I am thirsty for my coworkers to stop making fun of my faith.”

Whatever you are thirsting for, there are two things that will help you uncover the meaning in your distress: trust and time. Just as going through a dark night of the soul can be a part of your spiritual maturing, so enduring distress with faith helps to mold you into someone who is more like Christ. Jesus’s distress on the cross didn’t mean his situation was hopeless, and neither should your distresses cause you to lose hope.

Jesus knew in advance that he would be successful in his mission on the cross. That’s why he said beforehand, “In this world you will have trouble. But take heart! I have overcome the world.” (John 16:33, NIV)

Our biological need for hydration is so great that when we are thirsty it gets to be like we can’t think of anything else. And when our need is that urgent, we can lose all sense of perspective.

Two times the Hebrew people got in trouble over water while they were in the desert of Sinai. Now, in fairness, you can understand why. Sinai is one of the driest places on earth. Parts of it get less than two inches of rain per year. It has little surface water except after the occasional flash flood.

Once, while the Hebrews were wandering in this wilderness under Moses, they came to their leader demanding water. Since it looked like they were going to die of thirst, they questioned whether God was even with them. It was sort of a dark night of the soul that the whole community participated in. They asked, “Is the Lord among us or not?” God miraculously provided water by having Moses strike a rock with his staff. After that, the people quieted down.

Later, though, a similar situation occurred where the people quarreled with Moses. “There is no water to drink!” they lamented. Moses got mad. And this time, it was Moses who got in trouble. Again, he struck the rock and got water out of it, but God accused Moses of not having faith in him. We’re not sure what exactly Moses did wrong. Maybe the problem was that Moses struck the rock twice, because once should have been enough if he really trusted God. Some have drawn conclusions on the more elaborate implications of the rock as a type of Christ, who was struck once for our sins.

Whatever the hidden meaning of Moses’s failure might be, we need to recognize that the New Testament applies these events to Christians. Referring to the ancient Israelite, it says, “They drank from the spiritual rock that accompanied them, and that rock was Christ.” The water that the Israelite drank was a form of deliverance for them, and all deliverance ultimately comes from the Savior of the world, Jesus Christ. He is still the miraculous rock of grace and salvation for us today. He is the source that satisfies our thirst. And this is the point I want you to remember when the distress in your life becomes so great that you find yourself in desperation mode: We have to go to the right source of water for our thirst. We have to go to Jesus for help.

Some of the Israelite in the Sinai desert were faithful to God, their deliverer, and some were not. Let’s learn from their example. When we have physical distresses of any kind, whether illness, injury, weakness, or whatever it may be, Christ our spiritual Rock is sufficient to satisfy our needs. The sooner we learn this lesson, the better. Because our vulnerability to hardship and distress is not going to go away. If anything, we’ll get weaker and more vulnerable as we go on in life.

STEVEN FURTICK is the New York Times best-selling author of Sun Stand Still, Greater, Crash the Chatterbox, and (Un)Qualified. He is also the founder and lead pastor of Elevation Church, based in Charlotte, North Carolina, which since its founding in 2006, has grown to multiple locations across several states. He preaches around the world and holds a Master of Divinity degree from Southern Baptist Theological Seminary. Steven and his wife, Holly, have three children.