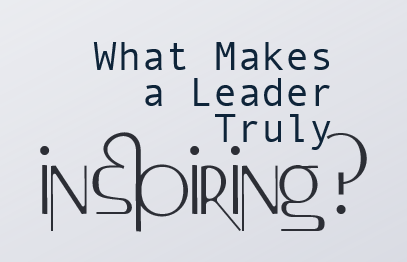 “I have never bothered or asked I society as a whole; I contented I . That has certainly been useful in a wide circle; but that was not the aim, it was the necessary result.” –Johann Wolfgang von

talented leader and an inspiring . insights, and painful territory. What is the difference between leaders we respect and leaders we’d follow through the wilderness into some supposed “Promised Land?”

Passion is contagious. Charisma certainly captivates us. Eloquence and physical qualities do too. But someone can have all of that plus a high IQ, endless resources, and still won’t follow them very far. It’s also true that someone can lack all of it and we’d still follow them into battle. Why?

through of sorts. Usually, there’s a long process that leads up to it and the death itself might , but regardless of how or even why it happens, the leader present order of things and an unseen reality. It’s the . There’s no doubt about it: they’re fully in and compel us to do the same. Inspiring leadership is undeniably biographical.

I remember attending my first U2 concert and hearing Bono sing, “In the Name of Love.” that song work: full throttle! Any second-guessing or backing off, . a . ( root of “emotion” means “”) 70,000 people and swept them themselves.

. Their hearts and yanks us out of our lethargy and doubts.

A young student once asked a rabbi, “What must I do to change the world?” fully surrendered to the changes , said, “ graveyard and criticize the dead.

Then praise them.” Obviously perplexed at such a strange response, the rabbi continued, “When you can be as dead to the praises and insults of people, you can begin to change the world.”

I affirmation I require.

I entrenched in present reality as they are

Are you fully abandoned to the vision

people who know you say, “Without a doubt?!”

enraptured that timidity and to an unfeigned boldness?

If not, don’t start with leadership techniques. First, ! before you engage the forms and techniques of leadership. If not, you’ll become a tour guide, not an inspiring leader.

Sam Chand once said that one’s . : Growth requires change, change requires loss, and loss requires pain. We hit painful walls that force a self-inventory: is it worth it? Can we endure? We either decide it’s not worth it or we press through and allow “perseverance to finish its work.” (James 1:3)

You don’t need a great voice, a large network of powerful friends, , . , passion, . out of this death of self, they will naturally emerge in ample supply.

Charles Wesley was once asked why he was so influential and said, “When you light yourself on fire, people love to watch you burn.”

BONUS: Why Your Anxiety is Suffocating Your Ability to Lead

Oftentimes, , the data,…but the truth is, the same chosen a different technique, had , would still been successful

of a group. Friedman names five natural tendencies in relationships that cause disintegration:

‘ connected’ ; , but , they’re deeply involved in the emotional processes going on, but they’re not caught in a cycle of reactivity or dependent upon consensus for direction.

non-anxious real . intense by nature, I’m emotionally , and in the face of resistance, it’s hard not to be anxious. -A staff , is resisting an important building project, … opportunities for anxiety.

How Jesus Modeled a Non-Anxious

clearly and listen well, but if I need to be completely understood, or liked by all, or develop consensus , crossed.

Things look different on the other side of a barrier. Jesus explained the cross before he was crucified, . He didn’t wait to move forward.

Our creative work must begin with the same 4 words that introduce the book of Genesis… the beginning God…” We’re tower of babel and Pentecost…and our vision must be received …Jesus would say, “I only do what the Father does.” Clarity decisiveness in the valley.

I had to resist a need to try and , spread good seed, but when we move beyond what we’re meant to steward, we become anxious.

Wesley Furlong serves as the lead pastor of Florida’s Cape Christian Fellowship. In 2012, Wesley star-ted a city initiative called Not In My City and is passionate about seeing families experience God’s of Jesus in the local church. To learn more, visit www.wesleyfurlong.com