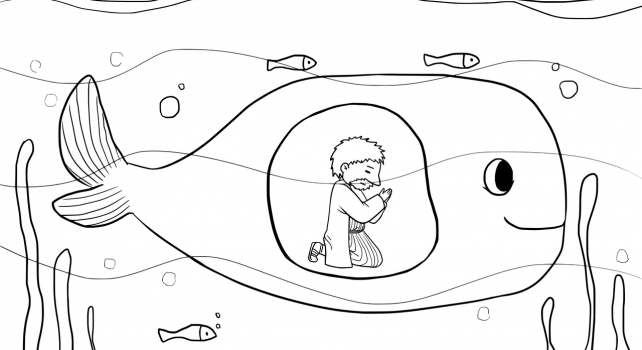 The biblical story of Jonah is a familiar one if you grew up with flannel boards in Sunday school. It’s a story that has all the elements of a good movie.

In the story, God tells Jonah, a Hebrew, to go to Nineveh, a pagan godless city whose king and people hate the Hebrews. Jonah is reluctant, so much so that he gets on a boat and sails in the opposite direction. While on the boat, a terrible storm almost destroys him and his fellow shipmates.

At some point, the shipmates figure out that Jonah is the cause of the storm and throw him over board. Then a massive fish swallows Jonah alive and he survives in the belly of the fish for 3 days and nights. While captive in the belly of fish, Jonah cries out to the Lord for rescue. The fish spits Jonah out on the shore. God again tells Jonah to go preach to the Ninevites. This time, Jonah obeys. The Ninevites repent and God spares them.

Ok that is where the flannel board stopped. Great story about a big fish and Jonah finally doing what he is told by God. We didn’t talk about the rest of the story in Sunday school. Yet, there is an important lesson to be learned from Jonah’s responses.

From the beginning of the story, Jonah is angry that God wants to help pagans. His reluctance to go to Nineveh is because he knows God is slow to anger, gracious, merciful and abundant in loving kindness. He knows God is going to help these terrible people. He wants no part of it. According to Jonah, only the good guys (the Hebrews) should get blessings and God’s interventions.  Jonah doesn’t believe the Ninevite pagans are worthy of God’s love and rescue. Basically, Jonah is a bigot!

Because of the fish experience, Jonah eventually does what God tells him to do. But his heart isn’t in it. When he gave the message and the people repented and turned from their wicked ways, Jonah left the city, sat in the sun and was angry. So angry, he wanted to die. Why would God help “those people?”

There is Jonah. Sitting in the hot sun being angry. In another weird moment, God prepares a plant to cover Jonah’s head from the scorching sun.  Jonah was grateful for the shade God provided. God took care of him. But then God sends a worm to destroy the plant. God points out to Jonah, you care about the plant taking care of you, but not about the people of Nineveh. What is up with that? It’s OK for you to experience my blessing but not those you think are unworthy.

God questions Jonah about this and asks if it is right for him to be angry.  Jonah answers, yes it is. Wow, so Jonah does this incredible thing with a wrong heart motive. Then he still doesn’t want the people of Nineveh to be blessed. They have been awful people and simply don’t deserve God’s love in his mind. Jonah’s racism is on display.

Jonah’s hate and resentment toward the lost people God wanted to save can be seen today. He didn’t want to deal with pagans and didn’t rejoice when they repented. After all, they were mean to his people. He didn’t want God to bless the other guy, only His group.

This is a chilling message for the church today. Are we all about our in crowd? Do we harbor hate and resentment toward those who are lost and taunt us? Remember, the Ninevites were enemies of God and cruel in their treatment of those who believed. Still God sends his person to go after them.

This raises the question, can we love God and hate people? Do we call the lost demons and terrible names? Now apply this to the church as well.  There seems to be a lot of disparaging remarks on social media to those in the body of Christ. Can we love God and hate our brothers and sisters–those of color, different denominations and those who fail in leadership? What is in our heart when it comes to wanting God to intervene and bless those who curse, persecute and use us? Jonah brings that challenge to my heart.

If you have been hurt by Christians because they are bigoted like Jonah, you need to see this is not a reflection of God’s heart or love. God will deal with each of us one day. Look inward to your heart. Do you harbor anger, resentment or hate?

We who have been rescued by God, delivered out of the belly of the fish, can still have a lot of acid in our belly that needs to be cleaned out. Maybe we judge those who receive God’s blessings and think, they aren’t worthy. Maybe we think, God help the Christians but don’t help the pagans? Give them what they deserve. This is bigotry.

Jonah prompts us all to examine the motive of our  heart. Are we angry at those who won the election, the people on the left or right side of aisle, the people who persecute us in the culture, those who do unscrupulous things? Let’s be honest. Are we cheering for those not in our in group to fail and get theirs? Do we enjoy seeing denominations fight and leaders fall? Do we secretly harbor anger?

Jonah was used to do something important for God. But Jonah’s heart was not right. He maintained a right to be angry and his story ends with a question from God–Should I not have pity on all people? Basically, who are you Jonah to tell me to allow those thousands of people to perish? And by the way, you care more about a plant than those people?

Look inwardly. Are you hoping the godless fall and get what they deserve? Are you secretly hoping certain Christians will fail or get theirs?  Or are you praying and hoping God redeems all people? Let’s not care more about the plant than the people God wants to save.