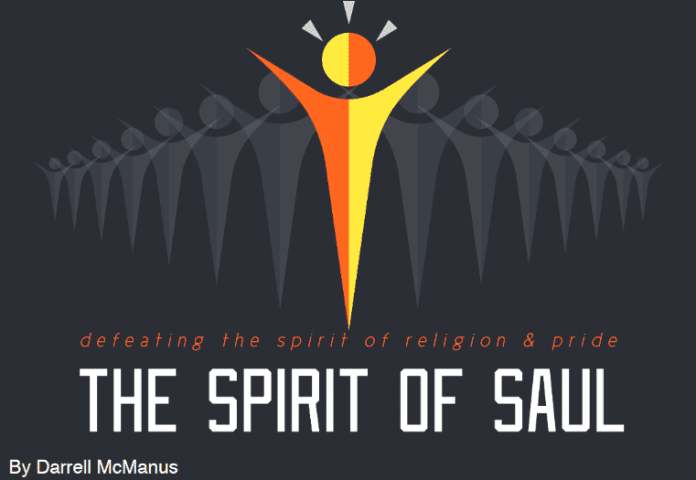 According to 1 Samuel, chapter 9, Saul was chosen by God to be king over Israel. He was a fine, handsome young man. Verse 2 says, “There was none finer—he literally stood head and shoulders above the crowd (The Message)!” He had such a bright future: the anointing of God was upon him and he had available to him the wisdom and blessings of God. But, somewhere along the way, Saul messed up big time!

In 1 Samuel 15, we read that God instructed Saul to take his army and go against Amalek. He was to totally destroy the Amalakites—men, women, children, even the animals. But Saul decided it was okay to spare Agag, king of the Amalekites, and to allow his soldiers to keep some of the choice sheep and cattle to sacrifice to the Lord.

When Samuel heard of this, he confronted King Saul about his disobedience, but Saul did not quite see it the same way:“

Saul defended himself. ‘What are you talking about? I did obey God. I did the job God set for me. I brought in King Agag and destroyed the Amalekites under the terms of the holy ban. So the soldiers saved back a few choice sheep and cattle from the holy ban for sacrifice to God at Gilgal –what’s wrong with that? (1 Sam 15:20-21, MSG)’”

Check out these facts about Saul:

1 Samuel 15:27-29 tells us that as Samuel tried to leave, Saul grabbed at the priest’s robe and tore it. Samuel said, “God has just now torn the kingdom from you, and handed it over to your neighbor, a better man than you are. Israel’s God-of-Glory doesn’t deceive and he doesn’t dither. He says what he means and means what he says (MSG).”

The Spirit of Saul will cause a person to lash out at God’s anointed when he has lost his own anointing. Because jealousy is not dealt with, it will cause an individual to act religious, put down other ministers, get outside his own assignment, be fueled with a rage that kills others, frame his own loved ones, and run wild on his ministry, like a tyrant out of control.

A Few Characteristics of the Spirit of Saul:

The spirit always tries to attach itself to God’s chosen servants and their family members. It will cause you to turn against your own helpers.You will disobey God without even realizing it. You will be jealous of the success of others. And you will lash out at God’s prophets when they correct you.

The Saul Test for Leaders:

1. Do I become jealous of other Christians or ministries?

2. Do I lash out at my leaders when they correct me?

3. Do I constantly need to be confronted with my sin because I don’t see it in time?

4. Do I regularly believe that I could make it quite well with the absence of any spiritual leadership?

5. Do I find there are times when I despise outbursts of worship like shouts, dancing, etc.?

6. Do I view myself more highly than I should?

If you answered yes to any of the above, you need to sincerely repent and turn completely to the Lord for total restoration!

Pray this prayer with me today:

Father, I come to you in the name of Jesus. I ask you to forgive me for yielding myself to the Spirit of Saul. Forgive me for tolerating and being sympathetic to Saul’s ways. Purify my heart, Lord. Remove every wicked way from my life. Help me to boldly stand against this destructive thought process. Help me to receive the saving of my soul man (mind, will, and emotions) in this area according to 1 Peter 1:9, which is the end or goal of my faith. Even more specifically, help me receive the saving and delivering of my mind (thoughts, feelings, and affections) in this area.

Without reservation, I bind and renounce the Spirit of Saul. I pull down this stronghold in my life and bring every thought into captivity to the obedience of Christ. You have been found out, Saul, and will no longer work in my life. Let me walk in Your Light, Lord, and give me discerning eyes and ears to recognize and expose any darkness in my path. I am totally free, and will remain free. I give you praise for this, Father, in Jesus’ name, Amen.

The Spirit of Saul will cause a person to lash out at God’s anointed when he has lost his own anointing.

Darrell is founder of Darrell McManus Ministries in the United States. For the last eight years, he has overseen 684 churches and built and established a large orphanage in India. He has also ministered in South Africa, Honduras, and China. Recently, the Lord has given him oversight of a ministry and orphanage in the Philippines. He’s had the joy of being a pastor for more than twenty-six years. Darrell is now traveling full time and is in demand as a conference speaker. He has appeared on numerous television and radio programs. He also conducts School of Ministry classes in various venues, where many are trained to flow in God’s supernatural power. Darrell’s passion is to see believers discover and operate in their God given assignments.