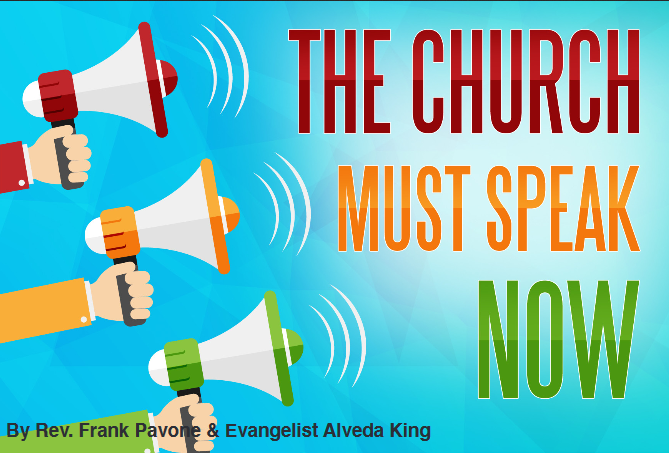 It has been almost 43 years since abortion on demand became “the law of the land” through the infamous Roe v. Wade decision and the lesser known Doe v. Bolton decision and still many people – including pastors — are not willing to address the issue.

Pastors by definition are supposed to lead their flocks. They have been given a special role to guide their congregations and to preach the Word of God. They are to lead their people to heaven. And yet, still many remain silent.

Some side with a woman’s right to make their own choice. Others are quiet for fear of offending some in their congregation. There are many other reasons why people don’t speak up and yet, none of them justify their silence.

As Edmund Burke said, “The only thing necessary for the triumph of evil is for good men do nothing.”

There are far too many “good” people doing nothing to bring awareness to the holocaust that is abortion. And as a result, babies by the thousands are losing their lives every single day.

With all the theological training ones goes through in order to become a minister of the Word of God there is no one better suited to speak to the immorality of abortion than pastors.

But not only are many pastors not speaking out against abortion, some are even promoting it. Just last week members of the Ohio Religious Coalition for Reproductive Choice blessed an abortion clinic in Cleveland – the same clinic where a young woman, Lakisha Wilson, died during a second-term abortion last year.

For clergy to bless an abortion clinic is contrary to the two central commands of the Christian faith – to love God with all our heart, soul, mind and strength and to love each other as ourselves. We cannot claim to love God or each other by helping those who kill our brothers and sisters.

Moreover, this breaks the commandment You shall not use the name of the Lord your God in vain. This commandment does not only prohibit cursing by invoking God’s name. It also prohibits blessing in God’s name that which God abhors.

Isaiah 5:20 warns: “Woe to those who call evil good and good evil, who put darkness for light and light for darkness, who put bitter for sweet and sweet for bitter.”

Not only are they calling an evil practice, abortion, good but they are also, by their example, leading people away from God and causing them to stumble in their faith by embracing evil instead of standing up against it.

The Bible, in Matthew 18:6-7, also says, “If anyone causes one of these little ones—those who believe in me—to stumble, it would be better for them to have a large millstone hung around their neck and to be drowned in the depths of the sea. Woe to the world because of the things that cause people to stumble! Such things must come, but woe to the person through whom they come!

If one voice can change the world, imagine the changes that would happen if every pastor in church preached clearly on abortion.

If one voice can change the world, imagine the changes that would happen if every pastor in every church preached clearly on abortion to their congregation. Those who are contemplating abortion may choose life. Those who have been wounded by an abortion in their past may find healing.

We preach on abortion to save such women, and to protect other women from making the same mistake. A letter we received at Priests for Life from a woman who had an abortion urges us not to fear speaking out. “I can’t help but think that if I heard in church that abortion was wrong, I might have chosen to keep my baby instead of killing my baby.”

When we address abortion from the pulpit, we are telling post-abortive women that we care. Our silence, on the other hand, does not interpret itself. When these women hear nothing from the pulpit, they may assume either that we don’t know their pain, we don’t care about their pain, or worse, that there’s no hope. But we do know, we do care, and there is hope. So we should say so.

Abortion doesn’t just take the life of the baby and it doesn’t only harm that child’s mother. Abortion impacts fathers, grandparents, siblings, friends, and the community as a whole. With over 57 million abortions in the United States alone since 1973, there are a lot of people who are hurting and in need of healing, repentance and forgiveness.

The time is now for the Church and its leaders to speak up, to speak out, to help bring an end to the atrocity of abortion and to help heal all those who have been impacted by its shockwaves.

Working together the body of Christ can turn around the course of history. We are God’s hands; we are God’s feet; we are God’s voice. We can write a new chapter in human history, one of agape love.

Abortion is a brand new cause every day. The cause is the life that can be saved today. Each day in our country the abortion “issue” is really more than 3300 “issues,” namely, the real human children who are scheduled for death. Each day is a new tragedy, demanding a new response.

Is this a lost cause? Absolutely not! We have no reason and no right to declare this cause lost. It is not a question of pro-life winning or pro-choice winning. The fact is that if pro-life doesn’t win, nobody wins. We are talking about the very existence of human civilization. The error of declaring certain categories of people to be “non-persons” has occurred before in history, perhaps too many times to count, but these errors have been corrected. The Third Reich was beaten. Apartheid in South Africa has ended. In Rwanda, national identity cards no longer separate citizens into Hutu or Tutsi. The error of consigning the unborn to the category of “non-persons” can, must, and will be corrected. Abandoning this cause is not an option.

Alveda recalls something her uncle, Rev. Dr. Martin Luther King Jr. once said, and it is as relevant to our fight against abortion as it was to the civil rights movement: “The ultimate tragedy is not the oppression and cruelty by the bad people but the silence over that by the good people.”

Vow today to be silent no more.

Father Frank Pavone is the national director of Priests for Life, president of the National Pro-Life Religious Council and pastoral director of Rachel’s Vineyard and the Silent No More Awareness Campaign. His latest book, Abolishing Abortion, was published in August by Nelson Books.

Dr. Alveda C. King, author of King Rules, grew up in the civil rights movement led by her uncle, Dr. Martin Luther King, Jr. She is a pastoral associate and director of African-American Outreach for Priests for Life and Gospel of Life Ministries and founder of Alveda King Ministries. Her family home in Birmingham, Ala., was bombed, as was her father’s church office in Louisville, Ky. Alveda herself was jailed during the open housing movement.