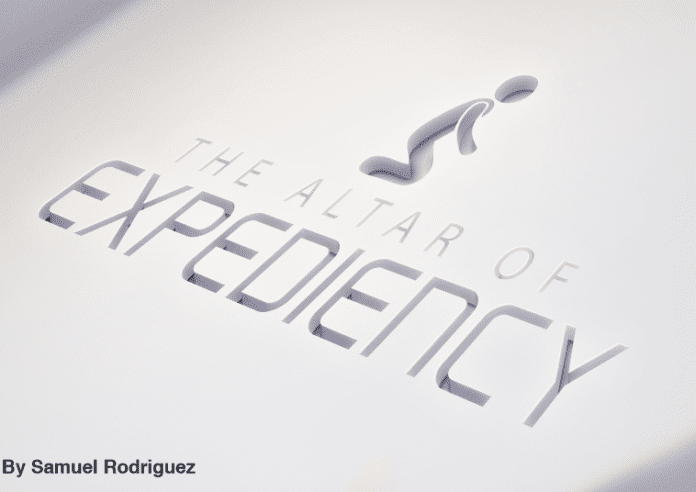 Today’s complacency is tomorrow’s captivity. We cannot be complacent in these troubled times. As 21st century American Christ followers, we cannot deny that we live in difficult times; times of great moral relativism, cultural decadence, spiritual apathy and ecclesiastical lukewarmness.

For many, the obituary of American Bible-believing, Christ-centered Christianity seems for all practical purposes written and about to be published in the annals of American history.

Yet, there exists one fundamental truth ready to thwart any and all premature burials of this powerful faith narrative; the gates of hell cannot, may not, shall not, will not prevail against the church of Jesus Christ.

In that regard, I stand convicted and convinced that our Christian faith, our Judeo-Christian value system, will not only survive these troubled times but we may find that we are standing at the precipice of a “Third Awakening.”

While our Bible-based, Christ-centered values and mores stand under unprecedented assault from culture and legislative initiatives, the number one problem in America may be none other than a lukewarm church–a church willing to sacrifice truth on the altar of political and cultural expediency.

The Truth of Our Identity

First, corporately, we stand guilty of sacrificing the truth of our identity, of who we are in Christ. Jesus said in Matthew 5:14-16, “You are the light of the world. A city on a hill cannot be hidden. Neither do people light a lamp and put it under a bowl. Instead they put it on its stand, and it gives light to everyone in the house. In the same way, let your light shine before men, that they may see your good deeds and praise your Father in heaven.”

Thus, the question must be asked: Who are we? Are we just another institution in society? Are we another religious faith narrative competing in the marketplace of ideas? Are we a feel-good machinery for the spiritually impaired? Are we an antiquated conduit for a set of irrelevant values no longer applicable in the world of Facebook, Ipads, Twitter, Instagram and Youtube?

Who are we? We must respond with the following with clarity, conviction and courage:

We are prophetic and not pathetic.

We are apostles, prophets, evangelists, pastors and teachers. (Ephesians 4:11)

We are world changers and history makers. (Mark 16:15)

We are the Church of Jesus Christ and the gates of hell shall not prevail against us! Hallelujah! (Matthew 16:18)

If we truly embrace all the above, then why do we seem to be surrendering? Why do we seem to be hiding under the canopy of despair and acquiescence? Why does the perception exist of a church in America retreating in the margins of irrelevancy?

For example, let us consider the prophet Elijah. When facing the false prophets at the altar, Elijah did not surrender truth on the altar of expediency; he exposed truth through the convicting power of God. God’s word serves as a prophetic prescription for our time. Jesus, the Truth, reminds us that it takes conviction to repent, courage to speak truth, holiness to see God, faith to move mountains, and love to change the world!

Finally, In order to change the world and build a strong foundation of righteousness and justice, let us remind ourselves daily of the following; Truth must never be sacrificed on the altar of expediency.

Rev. Samuel Rodriguez is the President/CEO of the National Hispanic Christian Leadership Conference and CONELA. The NHCLC is the nation’s largest Hispanic Christian organization representing millions of Evangelicals and more than 40,000 U.S. Churches while CONELA counts with over 450,000 and seeks to reconcile evangelist Billy Graham’s message of salvation with Dr. Martin Luther King, Jr.’s march of prophetic activism through its “7 Directives” of Life, Family, Compassionate Evangelism, Stewardship, Justice, Education and Youth.

Rodriguez is the author of The Lamb’s Agenda (Thomas Nelson, 2013) and Path of Miracles (2009). Rodriguez earned his Master’s degree in educational leadership from Lehigh University. He is recipient of two Honorary Doctorate Degrees; a Doctor of Ministry from the Baptist Universities of The Americas and a Doctor of Laws from Northwest University. He is an Assemblies of God Ordained Minister since the age of 23. Rodriguez also serves as Senior Pastor of New Season Christian Worship Center in Sacramento, CA where he resides with his wife of 24 years, Eva, and their three children.