As we approach this national day of thanksgiving I thought it necessary to reflect upon our nation’s long history of acknowledging and giving thanks to Almighty God.

On October 3, 1789, George Washington issued the nation’s first presidential proclamation in which he called the nation to set aside a day for giving thanks to that “great and glorious Being who is the beneficent author of all the good that was, that is, or that will be …”

President Washington gave under his official hand the following words:

Whereas it is the duty of all nations to acknowledge the providence of Almighty God, to obey His will, to be grateful for His benefits, and humbly to implore His protection and favor…

Furthermore, President Washington acknowledged that he was joined by the Congress in his appeal to the nation:

Whereas both Houses of Congress have, by their joint committee, requested me to”recommend to the people of the United States a day of public thanksgiving and prayer, to be observed by acknowledging with grateful hearts the many and signal favors of Almighty God, especially by affording them an opportunity peaceably to establish a form of government for their safety and happiness” … that we may then all unite in rendering unto Him our sincere and humble thanks for His kind care and protection of the people of this country previous to their becoming a nation; for the signal and manifold mercies and the favorable interpositions of His providence in the course and conclusion of the late war; for the great degree of tranquility, union and plenty which we have since enjoyed; for the peaceable and rational manner in which we have been enabled to establish constitutions of government for our safety and happiness, and particularly the national one now lately instituted for the civil and religious liberty with which we are blessed, and the means we have of acquiring and diffusing useful knowledge; and, in general, for all the great and various favors which He has been pleased to confer upon us.

This presidential proclamation represented, in unequivocal terms, the government’s call upon the people of this nation to acknowledge and give thanks to God for His many and abundant blessings. These were not benign religious platitudes but absolute statements reflecting the consensus view of life and reality which acknowledged that there is one God; the God who has revealed Himself in Scripture, in nature and in the person of Jesus Christ. It is this God that the nation once acknowledged and it is this God, the one true God that the people of this nation have turned against and today refuse to acknowledge and serve.

President Washington concluded his proclamation with these words:

And also that we may then unite in most humbly offering our prayers and supplications to the great Lord and Ruler of Nations and beseech Him to pardon our national and other transgressions; to enable us all, whether in public or private stations, to perform our several and relative duties properly and punctually; to render our National Government a blessing to all the people by constantly being a Government of wise, just, and constitutional laws, discreetly and faithfully executed and obeyed; to protect and guide all sovereigns and nations (especially such as have shown kindness to us), and to bless them with good governments, peace, and concord; to promote the knowledge and practice of true religion and virtue, and the increase of science among them and us; and, generally to grant unto all mankind such a degree of temporal prosperity as He alone knows to be best.

Seventy-four years later, in the midst of the great Civil War, President Lincoln would issue a similar call to the nation acknowledging the nation’s many blessings from the Lord, “Who, while dealing with us in anger for our sins, hath nevertheless remembered mercy.” President Lincoln, like our first president, would once again call the nation to national thanksgiving and repentance with these words:

And I recommend to them that while offering up the ascriptions justly due to Him for such singular deliverances and blessings, they do also, with humble penitence for our national perverseness and disobedience…and fervently implore the interposition of the Almighty Hand to heal the wounds of the nation and to restore it as soon as may be consistent with the Divine purposes to the full enjoyment of peace, harmony, tranquillity and Union.

America, in its folly, has been in the process of severing its national identity and dependence from the God who has given it birth and blessed it for so long. Therefore, it seems to me that we might be well served to recall the proclamation of these great men set aside for this Thanksgiving holiday and once again give thanks to Almighty God for His longsuffering patience and mercy toward this nation and humbly repent of our national rebellion and wanton disregard for all that is holy and just.

This national repentance begins in the church of Jesus Christ, which has seemingly lost its way; abandoned [practically] its first love and so often conformed to the world. May we on this Thanksgiving Day acknowledge the many and abundant blessings of Almighty God accompanied by a deep and sorrowful repentance for our individual, corporate and national sins. This, my dear brothers and sisters, is our only hope and it is for this real hope and the promise of forgiveness that we can give thanks indeed!

May the Lord, in His great mercy, pour out His spirit upon you, your families, His church and this nation this Thanksgiving Day. 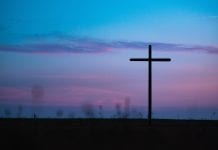