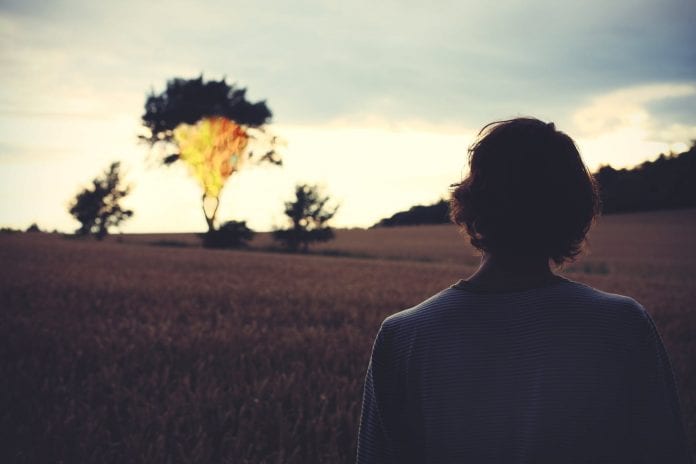 My fists clenched, my face scrunched and turned hot. Then noise like the screech of an old radio burst from my mouth: “You will eat those beans! You will eat them right now!” I uncurled one tight fist and slammed my palm down on the dining room table. My kids’ eyes grew wide. The baby started to wail.

I started to shake. Who was this crazed woman screaming at her children? And about beans of all things?! The Marlo I knew was calm and reasonable. She had no resemblance to the shrieking maniac who’d temporarily invaded my body and my home.

Most moms I know have experienced what it’s like to become the yelling-mom they promised themselves they’d never be. All of us know what it’s like for stress, pain, and fear to push us into becoming our worst selves. It’s horrible, sickening. And we feel helpless to restrain the monster, helpless to repair the relationships damaged in the wake of the beast.

I’ve found hope for my failures in the life of Sarah, Abraham’s wife. Sarah knew what it was like to become who she never wanted to be. The one who would be commended for her faith in Hebrews 11 was not always faithful. In Genesis 16:6, she was an unrighteous servant-mistreated. After years of infertility, Sarah, then called Sarai, gave her servant, Hagar, to her husband to have a child for her. After Hagar became pregnant, she began to treat Sarai disrespectfully. Then, Genesis 16:6 reads, “Abram said to Sarai, ‘Since she’s your servant, do whatever you wish to her.’ So Sarai treated her harshly, and she ran away from Sarai.”

As a mom, I know how facing arrogance, disrespect, and belligerence from those who are supposed to be most respectful can make you crazy. I know that feeling of helpless, and the anger that arises because you feel out of control. Maybe you do too.

Sarai was the one who was supposed to follow the God of Abram in a culture that worshiped other gods. She was the one who should have been more righteous, not less. But in her insecurity, her anger, her fear, her pain, her hatred, she failed. And she became an angry, bitter, hateful, hurtful follower of God.

Sometimes we’re no different. And, like Sarah, we drive away those we most need near us. And there we are, with our hidden guilt, with our broken mess, with our shattered relationships and lives.

That’s when we look for the quick fix, a list of to-do’s to make things right. We say, “I will do x, y, and z and it will all be okay again.” I wish I could offer such a list! But Sarai’s story tells us there is no list, not really. There is no simple plan to make it all better. We know this because Sarai didn’t go after Hagar when the servant girl ran away. Abram didn’t either. Both seemed incapable of repairing what they had broken. They sat in their tents, with the shards of their hopes, with the weight of their shame, while a woman pregnant with Abram’s child ran for Egypt.

Sarai couldn’t bring Hagar back. But God did.

God’s messenger found Hagar at a desert spring. Hagar had no intention of returning to Sarai. But God saw her, he cared, and he promised to bring blessing from her pain. All he asked was that she return to, and tolerate, the mistress who mistreated her (Gen. 16:9-11).

Hagar returned, not because Sarai had made promises, but because God did.

God restores what we destroy. God brings people back when we cannot. God gave Sarai, and he gives us, another chance to do right.

We sit in our tents with our ruined lives in our hands, and all the while God is going out to restore what we have broken.

He can bring new beauty out of what we’ve destroyed. He can bring blessing out of our belligerence.

He brings Hagar back. He gives us a second chance to do right.

Sometimes we’re no different. Like Sarah, we drive away those we most need near us.

In the chapters that follow in the Genesis story, Sarai will not abuse her servant again. In future incidents in which Hagar (or Hagar’s son) show disrespect, Sarai will act in accordance with what God wants. Why the change? It’s not because she tacked up a list of “7 ways to not yell at Hagar,” but because she recognized that only God can restore what she had broken.

When we become our worst selves, “I’ll make up for it by …” won’t do. Excuses like, “It was just a little slip up,” or “Everyone does it” won’t help. Even promises to do better next time aren’t the answer. Instead we must recognize our sin and the damage it’s caused. And then, we turn to prayer and repentance. We can only place the injured party in the hands of God and ask Him to bring back the ones we’ve hurt. We confess and repent, knowing that we do not have the power to heal, but with God’s help we can become who we are meant to be. In the very next chapter of Sarai’s story, God renames her Sarah and once again renews his promises. In the face of her shame, God makes her into who he created her to be.

So when you become your worst you, don’t despair! Make room for God to make you into the parent you are meant to be, and for him to work in those you’ve hurt, in his own timing, in his own way.

Because that’s what God does. That’s who God is. He keeps his promises. Even when we do not. He restores our lives, our families, our hope . . . even when we’ve blown up our families with our failures, and are sitting in our tents in shame.

Repent, trust, and be brave enough to hope again. God has not turned away. Even now he is at work.

Marlo Schalesky is an award-winning author of both fiction and non-fiction whose articles have been published in many Christian magazines. Her latest release is Waiting for Wonder: Learning to Live on God’s Timetable (Abingdon Press). She is the founder and president of Wonder Wood Ranch, a California charitable organization bringing hope to a hurting community through horses. Schalesky lives with her husband, six children and a crazy number of animals at her log-home ranch on California’s central coast.

Excerpted from Waiting for Wonder: Learning to Live on God’s Timetable © 2016, Abingdon Press