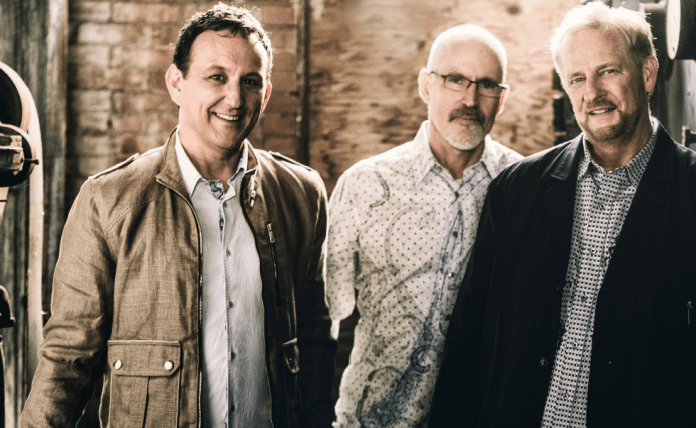 First of all, congratulations on 25 years together, making music for the Lord that is both uplifting and inspiring! It’s a milestone, 25 years: What has kept Phillips, Craig & Dean together as a group when so many other Christian bands have disbanded or gone their separate ways?

We could point to several answers in regard to this question. First, as a group, we have never been on the road full time. Even in the early days when we were doing lots of dates and touring heavily, we were always plugged in and on staff at our local churches. As a result, I think burnout was less of a possibility. We had space apart from each other and even lived (and still do) in different cities. I think that made our time together more special. Secondly, our personalities are complimentary to one another, and we learned to lean in to those strengths that the other possessed. When there is a group involved, if you get along (which we do) and if you share the load (which we do as well) then the load becomes lighter.

Can you tell us briefly about some of the highlights of your music ministry: What event(s) have inspired you over the last two-and-a-half decades? And how has this impacted your music?

Wow…this is a difficult question as there have been many over the past 25 years. I would have to say that one thing that has been really special is the opportunity to sing at Brooklyn Tabernacle many times over the course of the last 25 years. I don’t think we have ever said “no” to an invitation and every time we go there it is such a great experience. The diversity of the church and the charged atmosphere during the services is amazing. We sang Revelation Song for the first time there (actually before we had recorded the song on our Fearless album), and singing it there was probably the impetus for putting in on the album.

Being part of My Utmost for His Highest was an incredible honor. Such great artists and such an incredible project. We were still relative newcomers and we were in awe of the artists who sang on that album. Recently, we participated in CCM United night. That was an incredible night and the spirit of unity was so special to experience. There were no egos present that night and it appeared that every artist was interested in honoring others and honoring Jesus. That is a great combination. I think the more things like this you experience the more you desire to be authentic in your music. Being true to the message of lifting Christ and being true to who you are musically. It has been an incredible journey….and we don’t think it’s over yet. The best is yet to come.

How did the three of you meet, and what inspired you to form your trio in the first place?

We were all acquaintances and friends for several years before the group was formed. All three of us had independent solo albums and were doing our best to pay for the independent projects. When Randy went to Nashville seeking a solo deal, Star Song told him they were not really interested in a solo deal but if he could put together a group that they might have interest. Randy contacted us. We met in Dallas, learned three songs together and put them down on a rough demo. We each contributed one song we had written. Two of those three songs found their way onto our first album and the rest is history.

If you could each choose one important life lesson that you have learned from 25 years of serving the Lord together, what would it be?

This is difficult to nail down as well because there are three of us and each of us probably would have a different answer. But as a group, I would say that a great lesson we learned is that if you apply yourself to the gifts you have been given, and you do what you do to the best of your ability (and do it in the place where God has called you), it places you in a position for God to elevate your gifts and your platform. The three of us had big dreams. But we weren’t just sitting around waiting for something to happen. We were involved at the local church level and actively using the gifts that God had given us. Who was it that said something to the effect of, “The harder I work, the luckier I get.” All of us were in our thirties when this group started. That means we had been involved actively in the local church for 10 plus years. And in the course of doing what we do, God opened incredible doors of opportunity.

This fall, your first hymns album, Hymns and Praises, will be released. According to a press release, this album “features the timeless church classics with a more soulful approach that pays homage to the Muscle Shoals sound.” What drew you to do a CD of classic hymns?

All three of us grew up in church. Our fathers were Pastors and we grew up singing the great hymns of the church. The last three years or so, we have done a segment in our concerts in which we talked and sang about who and what influenced our music. I think it was a natural progression that we went into the studio and did an album. People seemed to enjoy the segment in our concert and seemed to want a recording of it. It has been a lot of fun.

You also have your first book coming out in early 2017 that will tell the stories behind your 25 No. 1 songs, along with other hits you’ve recorded. Do you have a name for your book yet? And which of you decided it was time to write a book?

We currently don’t have a working title. Again, I think this was just something that has been in the pipeline for several years and the timing was finally right. People seemed to enjoy hearing about the origin of a particular song. Or maybe wanted to hear some of the funny things that happen on the road. It felt like the time was right for us to put something together.

Over the years we have had so many inquiries about the inspiration behind particular songs. Many of our songs were inspired by real life stories of things that happened in our local churches, or by things that happened in our own lives. While on occasion we’ve been able to share in concert the backstory behind particular songs, that seemed to be the exception rather than the rule for most of the stories. At some point, someone suggested we put together a book containing the “stories behind the songs.” As with anything we do, the bottom line is that people will see Jesus in a greater way; that there will be something that magnifies God in the eyes of people. While there is no way that we can make God any bigger, we can make Him bigger in the eyes of others.

You will be hosting the REVIVE! Austin, Texas Weekend April 28-30, 2017, which will celebrate your 25 years of ministry. Tell us a bit about what we can expect at this event and where people can go to learn more about it, should they be interested in attending.

REVIVE is something we feel really special about. Our vision is for an intimate weekend of sharing, singing, worship, and fun. Unlike a concert where we sing for several hours and make our exit, this will be several days of getting to know one another, sharing on a more personal level, and spending time connecting in a way that is not possible in a concert setting. The three of us will be sharing individually as well as collectively. And of course, there’s nothing like good old Texas barbecue and to make any event a success.

So, where do Phillips, Craig & Dean go from here? What are your hopes and/or plans for the future?

We are open to where God leads. On several occasions we thought maybe the end was near, but it amazes us that people continue to come out to our concerts and continue to listen to our music. It’s actually quite humbling. We are about to leave for a ten-day tour with Travis Cottrell and we remain open to the possibilities God has for us as we enter this new season of ministry. We are very excited about the possibilities.