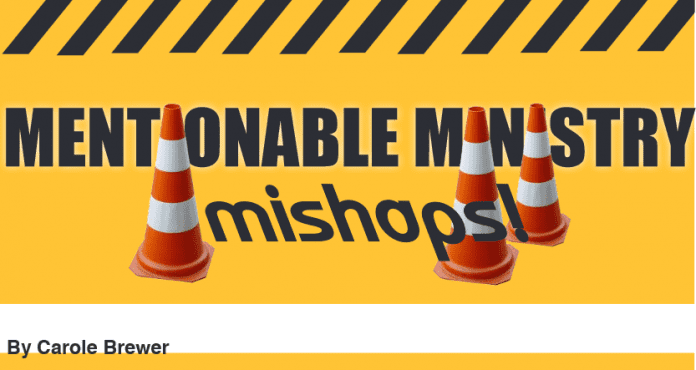 its risks. The heart is pumped , focused, and then, wham! The turns a well-prepared message into a comedy routine!

Laugh with me as I share some hilarious experiences.

when I was a monthly guest on . If you’ve ever sung on camera, you’ll agree that there’s nothing like it! When the red light comes on, tag – you’re it! A cold drafty less-than-perfect, teeth-chattering solo. Even the most carefully placed stance on the appointed floor spot cannot happen.

, , moths lens, and a large set backdrop crash to the floor. During , fluorescent red tongue; the result of finishing a cherry cough drop just before going on. At a smaller studio, I decided to try cue cards for a song not memorized. The assistant was late in displaying the first verse so I made up my own lyrics on the spot. When the card came up, I tweaked those lyrics to rhyme with whatever I had just sung.

TV isn’t really so bad. It could be that half the audience has left for a snack anyway. Since you can’t actually see them, you’re fine as long as you don’t watch the re-runs.

There’s nothing like singing and speaking for a live event either! In contrast to being on camera, galore! I was always how little kids could sleep on the I soprano range.

Once, when singing for a church located next to a fire station, the sound system mixed a distress call in with my solo. Another time, an event planner introduced me so I heard the huge remote speaker while seated in the . In less than a minute, the congregation saw me bolt through the side door with paper towel in hand chirping, “, I’m here!”

Recently, I had the opportunity to take a short flight on one of . especially blessed, I was ready to share my faith with whomever God would place next to me. A man showed up with a pleasant expression and belted himself in. We took off and he proceeded to retrieve a small book out of his case. While I enjoyed the view, I few lines, closing the book, looking up, and repeating the process. What was he studying? Now my curiosity got the best of me and I see the cover. Even with a napkin next to the book, I Rules of God. Rules of God? What was that about? Was this man a pastor, an elder? What church? Hmmm. , here’s my chance!

came, he handed over to me the peanuts and my cup of tea. I said, “Thank you.” and waited about 30 . “ intrigues me. What’s it about?” lifted into full view the book titled Rules of Golf! For the remaining 20 , this professional golfer explained to me, with numerous photos and diagrams, a apply to the St. Andrews course in Scotland. How educational for me!

Such mentionable mishaps can encounters with critters.

service, a I . straight out, I voiced “Whee” as under my seat. Somehow, the dignified introduction that I’d just received had lost its credibility.

Aviating bugs lodged in my teeth at a Fourth of July concert in the park. At a formal concert, a fly . zoomed out. Was that a critique?

Cows on the other hand, love my singing! At a small country church surrounded by a large field, the local herd gathered just outside the open windows. Contented and seeming to sway to my music, they were obviously .

At one of my most memorable , I finished the last note of a very . My eyes were closed and the congregation softly voiced an appreciative “Mmmm.” reflective moment was suddenly disrupted by a POP! Stunned by the interruption, I realized that I looked to my left. A deacon was alternately bowing and backing bulletin in his hand. I skittishly turned forward to the motionless , turned back to the deacon. He continued to bow and back away apologetically explaining that he wanted to protect me from that bee! My timid voice responded, “Oh, thank you……I think.” The congregation, still half shocked, slightly tittered. Considering a just happened, I slowly rotated my loudest voice, “All I can say is…..I BEE–LIEVE!” The entire church, , lasted for several minutes. I, the , upon exiting the loft. It made me wonder if, at a previous service, the entire choir had been rear-ended.

I have yet to hear a dog howl in one of my concerts but since I’ve , it’s always a possibility.

, earlier-than-scheduled introductions, misread book titles, or misguided squirrels can’t fully prepare me for whatever . Putting yourself out there does have its risks but I’ve found the blessings that add immensely to God through ministry.

Then our mouth was filled with laughter, and our tongue with shouts of joy; then it was said among the nations, “The LORD has done great things for them.”

With effervescence, Carole has shared her love for the Lord on television and radio programs, for regional and national conferences, and for church ministries worldwide. As a speaker, Carole seamlessly presents both the message and the music for “The King and I”; a four-session retreat for women. Learn more about this life-transforming weekend away at www.carolebrewer.com Carole’s stories have been featured in a variety of online magazines and book compilations including Kisses of Sunshine for Teachersand Conversations on Purpose for Women (Zondervan). A soloist, pianist and songwriter, Carole sings God’s praises on four dynamic solo CD’s and teaches others through her popular voice manual, Cookin’ Up a Song.She also serves as National Networks Director USA for Christian Women in Media Association. Carole’s newest adventure is to host “Bible Chicks”, an upbeat internet radio program on PureWorshipRadio.com. Visit www.BibleChicks.com for details and schedule.