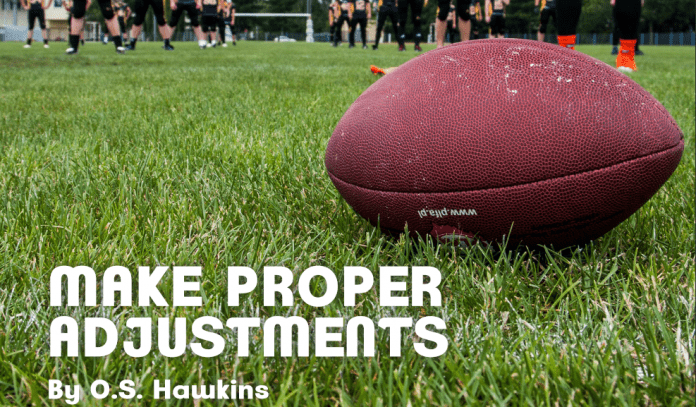 I was in the stands and personally watched one of the most amazing sporting events of all time—the greatest comeback in college football bowl history. It took place at the Alamo Bowl in 2016 between Oregon and Texas Christian University (TCU), both ranked in the top ten nationally. Playing with a quarterback who had never before started in a major college football game, TCU found themselves down 31–0 at halftime. Many of their fans had given up hope and had headed for the exits. Hundreds of thousands of television viewers across the country changed the channel or just turned off their televisions. However, there was one person who still believed, who still held to the hope of a comeback even when the situation looked so bleak.

Coach Gary Patterson took his team into the locker room at halftime and made some proper adjustments. He changed the defensive scheme. He instilled within his team the attitude that it was never over until it was over. Then he turned to his inexperienced quarterback, Bram Kohlhausen, whose father had recently died. The coach looked into the young man’s face and said, “Your dad has passed away, but he is watching. Can you imagine if you came back? Can you come back? Can you go out there and win this football game?” By the time halftime ended, the TCU players practically broke the locker room door down trying to get back on the field.

The result of those halftime adjustments was amazing. Oregon didn’t score again in the third or fourth quarters, and Kohlhausen led his team to tie the game 31–31 at the end of four quarters. Then, in triple overtime, he himself scored to complete the greatest comeback victory in bowl history. And all because a coach didn’t give up when he met stiff opposition but instead made some proper adjustments.

Nehemiah was something of a coach himself, and he knew it was the YAC, the yards after contact, that would determine whether his team would win or lose. So he, too, made some proper adjustments at halftime when the wall was halfway completed. He put his finger on the problem of the opposition he was facing. Some of the Jews were dwelling too near the enemy (Nehemiah 4:12). And the problem was that those from the tribe of Judah had been listening to those Jews who lived close to the enemy. The enemy was influencing them with their negativity. Being far removed from the center glow of the dynamic rebuilding spirit, they were picking up on the gossip of those who sought to discourage them. Living so near the enemy caused them to alter their focus and place their immediate attention on the enemy itself. They began to listen to the scoffers instead of listening to their God. This can happen to people who are in the process of rebuilding their lives. They can find themselves dangerously close to those who are attempting to discourage them, and they can begin to listen to them instead of moving themselves nearer to the center of where God is rebuilding.

One of Judah’s primary concerns and complaints was that there was “so much rubbish” (4:10). There was nothing wrong with the actual foundation upon which Nehemiah and his team were rebuilding their wall. It was rock-solid. The problem existed because for years all types of junk and debris had accumulated on top of that foundation. Any attempt to rebuild the wall without first removing the rubbish would have been frustrating and futile. Oh, they may have gotten the wall up, and it may even have looked really good, but the first big assault of any kind would have brought it tumbling down once again. It is always dangerous to attempt to rebuild a wall on a foundation as unstable as rubbish. Yet there are many who attempt this today, especially when it comes to trying to rebuild a relationship. Relational rubbish has a way of accumulating untouched over the years. To not remove it and to attempt to build again on top of it only assures that in a short time that relationship will crumble again. Relational rubbish can only be removed through true repentance and unconditional forgiveness.

” Are any of us wondering why we rebuild only to see our walls crumble again time after time? “

Others of us are living lives that were originally built on a solid foundation. We were brought up on the principles of honor, decency, and integrity that are rooted in the Bible. The problem lies in the fact that those principles have not been seen in a while because all the rubbish of life has buried them. And, unfortunately, some of us continue to attempt to build on that rubbish, instead of first removing it. This perpetuates an endless cycle of rebuilding and collapse, and it is a major reason why more walls of life are not solidly and permanently rebuilt.

When Nehemiah met with opposition, he first faced it head-on, and then he made the proper adjustments needed to complete the task. Listen to him, like a motivating coach at halftime, as he regrouped his troops: “Do not be afraid of them. Remember the Lord, great and awesome, and fight for your brethren, your sons, your daughters, your wives, and your houses” (4:14).

It was halftime for Nehemiah, and the wall was at half its height (4:6). It was time to make the proper adjustments to the game plan. Nehemiah called all his people off the wall, rallied them together, huddled them up, gave them an inspiring challenge, and then sent them out to get rid of the rubbish and finish strong. Like a seasoned coach of a championship team, he made the necessary halftime adjustments. There was a rebuke—“Do not be afraid of them.” He addressed their fears and encouraged them—“Remember the Lord, great and awesome.” Then he exhorted them—“Fight for your brethren.”

Are any of us wondering why we rebuild only to see our walls crumble again time after time? Could it be that we are attempting to rebuild on a foundation as shiftless as rubble? Remember, it is the YAC that matters. And sometimes opposition comes in the form of debris that first needs to be removed. As we remove that debris—through personal repentance and unconditional forgiveness—and as we continue moving forward toward our goal, we will become more and more convinced of the fact that . . . it’s never too late for a new beginning!

Taken from The Nehemiah Code: It’s Never Too Late for a New Beginning by O.S. Hawkins.Copyright © August 2018 by Thomas Nelson. Used by permission of Thomas Nelson. www.thomasnelson.com.

O.S. Hawkins has served pastor-ates, including the First Baptist Church in Fort Lauderdale, Florida, and the First Baptist Church in Dallas, Texas, for more than 25 years. A native of Fort Worth, he has three earned degrees (BBA, MDiv, and DMin) as well as several honorary degrees and is presently a PhD candidate at Southwestern Baptist Theological Seminary. He is the president of GuideStone Financial Resources, with assets under management of 16 billion dollars, serving 250,000 pastors, church staff members, missionaries, doctors, university professors, and other workers in various Christian organizations with their investment, retirement and benefit service needs. He is the author of more than 40 books, and speaks regularly to business groups and churches all across the nation.