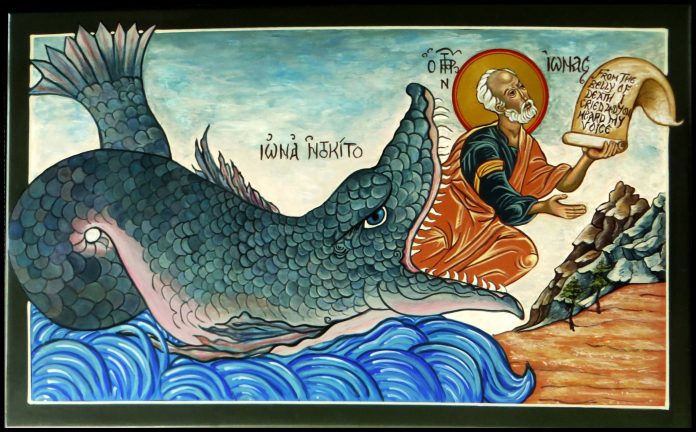 This is the story of the “big one” that almost got away.

If you grew up in Sunday School, you heard about Jonah and his escapade with the “whale.” (We all now know it most likely wasn’t a whale, but some even more massive fish God supernaturally had swimming alongside the foundering boat.)

Our online pastor, Jim Cymbala of the Brooklyn Tabernacle, preached on Jonah Sunday and offered fascinating insights relevant to our situations today. And for me, extremely apropos to our quest for True North Leadership development.

Let’s list what we learned about Jonah in Sunday School:

· Runs away from God’s call.

· Realizes he’s the cause for the massive storm at sea and offers to drown in order to save the lives of the sailors and the boat.

· God sends a “whale” to swallow him that doesn’t digest him for three days (hmm, that three day thing repeats again in the NT, doesn’t it?).

· Jonah repents. Goes to Nineveh. Preaches to the power center of the world in his day (Assyrian Empire).

At least that’s what I heard. But that’s far from the full story, right? It’s pretty much what happened, except for the hero part. But let’s jump to the final chapter in this short book. Here’s a different look at “…the rest of the story.”

· Jonah is furious. With God. With himself for actually obeying God — despite his release from the digestive acid-filled fish belly. (My producer’s brain always runs the movie in which all of Jonah is bleached white, and then slimed with fish vomit in the disgorging scene.)

· His heart is unchanged. Even after the fish episode and his acquiescence. He has a massively bad attitude about the assignment.

· Because Jonah is an unrepentant bigot. He’s a racist who hates the Assyrians. And, one must admit, with good cause. Nineveh was the epitome of everything loathed by the Hebrews: they were renown for legendary barbarity and fierceness on the battlefield. As the most potent military empire in the world, their leaders brilliantly invented chariots, iron weapons, and were the first to enlist siege-specialist engineers to help conquer cities. Their strategies and reputation to force enemy submission included skinning people alive, decapitation, mutilation, ripping out tongues and making pyramids from human heads. Cruelty was their badge of honor.

· Assyrians were the bloodthirsty and violent conquerors of Israel during Jonah’s time. He had every “right” to despise and fear these people to whom Yahweh was calling him.

· Nineveh was so large a city that it took three days to walk across. (You can walk the length of Manhattan today in eight hours.)

· Jonah enters the city — one day’s walk worth — and begins to preach a simple message. According to Eugene Peterson’s translation: “In forty days Nineveh will be smashed!”

Miraculously (divinely?), the people of Nineveh listened, and believed Jonah’s prediction. They proclaimed a citywide fast and dressed in burlap to show their repentance. Everyone did it — rich and poor, famous and obscure, leaders and followers. Including the king! No TV coverage. No social media. No fancy prophet in fancy clothes with an entourage to get him back to his plush hotel after the service.

· God is faithful to his nature — the very attributes already known to Jonah and the very ones he used as an excuse to not obey God’s call, “He yelled at God, “God! I knew it — when I was back home, I knew this was going to happen! That’s why I ran off to Tarshish! I knew you were sheer grace and mercy, not easily angered, rich in love, and ready at the drop of a hat to turn your plans of punishment into a program of forgiveness!” (The Message)

· BTW, Tarshish was in Spain. As far away from God and Nineveh as Jonah could imagine.

Pretty sure you know the next part of the story. He storms out of the repentant city and sits atop a nearby hill to see if God changes His mind and rains down hell fire after all. How delicious an irony that would be, right? And who doesn’t love a good sulk, especially when you’re in the right?

He finds a shady spot, but God does him one better. Instant-grows a broad-leafed tree to give him welcomed relief from the debilitating Middle-Eastern heat. Now Jonah is happy.

Ahh, but then the worm. Ever had a worm enter your life? Company? Organization? Those pesky invertebrate animals that bore into your work, messing with your plans and even destroying what you’ve built? Turning your world upside down?

Jonah’s worm destroyed his shade and comfort. Now he’s really crazy mad. “Then God said to Jonah, “What right do you have to get angry about this shade tree?” Jonah said, “Plenty of right. It’s made me angry enough to die!”

Let’s finish our analysis of the story:

· What was the true source of Jonah’s anger? The worm? His discomfort? The Assyrians’ repentance? Really? Enough to want to die? I don’t think so.

· No, he was incensed enough to die because God went out of his way to save people he hated. Despised. Loathed. Even feared.

· The story ends with God’s question, “…why can’t I change my mind about these people (and choose to save them)?”

Since Babel was destroyed and tribes were created in the diaspora, man has identified with his own. We humans never feel safer than when we are surrounded with like-minded, same-looking and behaving club members. Recently, I wrote about the confirmation bias that exists in all us. Confirmation bias occurs when people would like a certain idea or concept to be true…and end up believing it to be true. They are motivated by wishful thinking. This error leads the individual to stop gathering information when the evidence gathered is sufficient to confirm the views or prejudices one already believes to be true.

In other words, when we’re safely ensconced within our club, or denomination, race or political party…the brand we’ve chosen to identify with…everyone else is either sadly mistaken, just plain wrong, or these days, needs to be silenced and cancelled. Including Dr. Seuss. Really?

Jonah’s bigotry still thrives today. And most ironically and unfortunately, in many faith-believing Americans. We hate — proof found on any social media page at this very moment — the abortionists and the LGBTQ crowd, and especially the Democrats who love them! We abhor Christian leaders who have fallen, getting exactly what their dirty deeds deserved. We clamor against Anti-Trumpers or Pro-Trumpers.

And don’t tell me that Cancel Culture lives only on the left or amongst the pagans. Christians have been racists since the very beginning. (Read God’s intervention in Peter’s racial bigotry in Acts 10.) God has long been calling for the full redemption of ALL peoples which, BTW, happens.

So, let’s ask ourselves, as aspiring True North Leaders:

· What motivates my behavior to “others?” (Defined as anyone not in my clubhouse.)

· Why don’t I see my enemies and those who frustrate me so completely, like God does?

· When one of “those” drives me to intense wrath, with whom am I really angry?

· Shouldn’t I, as a healthy Spirit-led leader, be loving and praying for those with whom I disagree — or worse — despise?

· If God called me, like he did Jonah, to go proclaim His love to those I despise most — in the office, at church or next door — would I obey, or jump on a ship to Spain?

True North Leaders must be honest truth-seekers. And that includes the most difficult work of all: self-inspection. Check your heart. Check your brain. And check your motives.