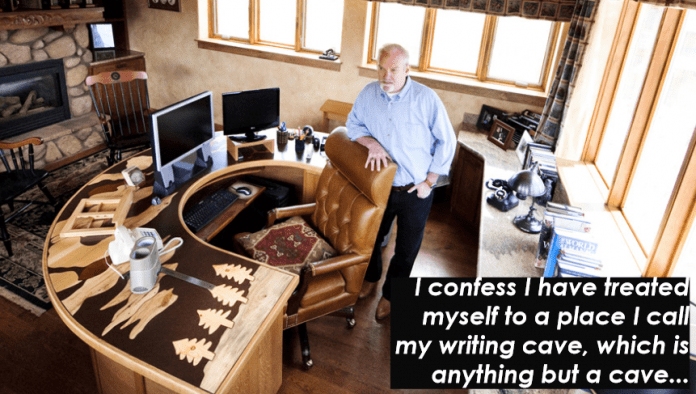 Solutions General Editor, Kelinda Crawford, speaks with Jerry B. Jenkins, author of the Left Behind series and nearly 200 other books, 21 of which were New York Times Bestsellers, about his latest book, The Valley of the Dry Bones.

Kelinda: Jerry, we’re excited about your latest book, The Valley of the Dry Bones!Could you share with us what the novel is about and your inspiration behind it?

Jerry: It’s set about a decade into the future and a 17-year drought has left California uninhabitable, forcing its citizens to relocate. Fewer than 1% of its population remain – by choice or necessity, but a contingency of 16 feels called of God to stay, at their own risk, to minister to the stragglers. They call themselves The Holdouts and face seemingly insurmountable odds even to survive, let alone have any influence.

Kelinda: Do you have a favorite character in the book?

Jerry: The main character, Zeke Thorppe, is a husband and father whose family has given up everything for this impossible mission – and at the peak of chaos, with the future of the country at stake, he becomes convinced he’s heard directly from God Himself.

Kelinda: How do you share your faith in your stories without sounding preachy?

Jerry: The key is to simply try to tell a compelling, page-turning story and include credible, skeptical characters. To maintain reality, not every bad guy sees the light, becomes convinced, or comes to faith. But my worldview permeates, and in the end hope prevails.

Kelinda: Tell me about how your books come into being. Are you inspired by the people and events around you, or do you draw from creative ideas and passing thoughts?

Jerry: I’ve never been terribly analytical about where my story ideas come from, for fear of jinxing the process. In short, I stay attentive and make them up! Usually a couple of disparate ideas will begin playing off each other in my head, and I start getting antsy to tell a tale. I try to put interesting characters in difficult situations and write to find out what happens.

Kelinda: Where is your favorite place to write?

Jerry: I confess I have treated myself to a place I call my writing cave, which is anything but a cave. It’s a beautiful wood-hewn lair, complete with a custom-made horseshoe desk, smack dab in the center of Colorado, with 360° mountain views where I am wholly unable to claim lack of inspiration.

Kelinda: I’ve heard you say that you treat writing as if it is a business no different than any other. Have you ever had writer’s block? If so, how have you pushed through it and made deadlines?

Jerry: What I mean by saying that writing is a business no different than any other is that I treat it as my job – which it is. No other profession is allowed the conceit of “worker’s block,” so how dare I? Imagine a teacher, lawyer, doctor, assembly line worker, or any other laborer calling their boss in the morning to say they can’t come in because they’re suffering from worker’s block. They’d be told to never come in again and laughed off the phone.I’m not saying there aren’t days when a writer doesn’t feel like writing, but there’s always work to do. I plant my seat in that chair and do something.

Kelinda: Have any other book ideas brewing in your head at present?

Jerry: Always. I wrote a nonfiction book last year with the manager of the St. Louis baseball Cardinals, Mike Matheny (The Matheny Manifesto / A Young Manager’s Old-School Views On Success in Sports and Life) which became a New York Times bestseller. We’d like to do a trilogy of fiction for kids, based on those same principles.

Kelinda: I meet many pastors and leaders who say, “I have a book or two in me, if I just had the time to write it.” What would be your response to them?

Jerry: With all due respect, I have a sermon or two in me, if I just had the time to preach them. Seriously, I would urge them to find a writer, because they will find that it takes a lot more than time to write a good book, just like it would take me a lot more than time to preach a decent sermon.Naturally, there are pastors who are excellent writers (Max Lucado, Chuck Swindoll, and Erwin Lutzer immediately come to mind),and there are writers who are excellent speakers. But the mediums really are different.

Kelinda: What is one great piece of advice you can give an aspiring writer?

Jerry: Don’t make the mistake of starting your writing career with a book, any more than you would start your educational career in graduate school when you should be going to kindergarten. Start with shorter things. Learn the craft, hone your skills, develop the ability to work with an editor, and arrive at a book.

Kelinda: When you’re not writing, what do you enjoy doing?

Jerry: I’m a voracious reader, but my ultimate priority is family. Dianna and I have been deliriously happily married for more than 45 years. We have three grown sons, two daughters-in-law, and eight grandchildren, the last three adopted. We spend as much time with our family as humanly possible.

Kelinda: That is wonderful! Well, I want you to know that we are truly excited about your new book release, and we will be encouraging our readers to pick up their copy at a local bookstore!

Get your copy of The Valley of the Dry Bones at Amazon.com or at your local bookstore today!