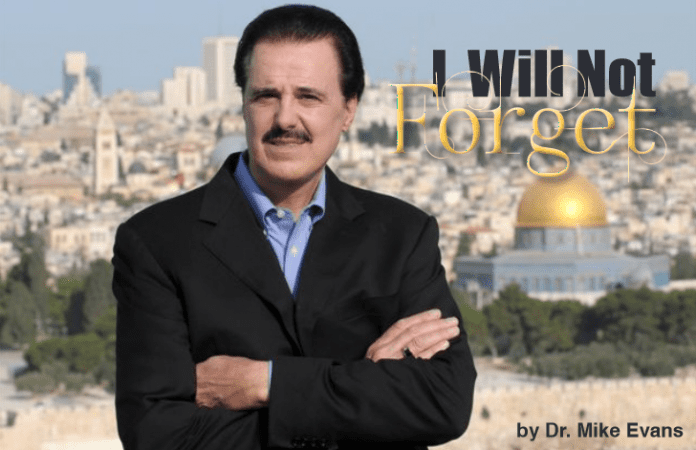 When I was four years old, I was watching cartoons on television. , a Dr. Billy Graham came on. My mother came into the and immediately turned TV. “ Jews,” she told me. “Christians kill Jews.” Her grandfather, my great-grandfather, Nazis inside his synagogue in what is now Belarus. They herded the , nailed , and screamed “Christ killers!” as perished

Many Jewish people believe that Christians hate them because of the suffering they have endured at the hands of those who claimed to be Believers. You and I know that to follow the Bible and Jesus requires that we love His Jewish brothers and sisters, but that is a message that too often has been communicated to God’s Chosen People.

On April 15, the Friends of Zion Heritage Center, the first Christian museum in Jerusalem that tells the story of Christian love for the Jewish people, will be hosting a global “I Will Not Forget” Holocaust Remembrance Day event to show Jewish people in Israel and around the world that their Christian friends have not forgotten them. and the growing threats against Jewish people, both in Israel and in other nations, highlight the vital importance for us to stand with crisis.

In 1953 the 27 the Holocaust. The entire nation of remember. Flags will be lowered . At 10:00 morning, a siren will wail across Israel, where they are.

Israel on this day. Cars stop in the middle of the road and people silent. . works. …. In Jewish synagogues, offered, and psalms will be read and sung.

As the day begins at sundown, a the Yad Vashem Holocaust Jerusalem. Each year, six torches, symbolizing the six . During the day various events are held, “ the Living” at descendants. Yom a day to remember the horrors million —one —perished at the hands of those God’s work. This great evil has left scars that remain to this and has driven a wedge between Christians and Jews that must be undone.

Zion Heritage Center to build a bridge of love and understanding . More than 30 years ago, I Prime Minister Menachem Begin in Jerusalem me to build a bridge between Jews. I’ll never forget his response: “Let’s build it together!” For the rest of his life, our efforts and gave his support to our events designed to bring Christians and Jews together.

the need to publicly declare our support of Israel and the Jewish essential. The sad reality is that Jew-hatred… present. Together, we are going to change that! Together, we will unison and declare that we will both remember the darkness of the past and commit ourselves to lights for the future. The response to the announcement of this event has been huge.

More than ten thousand churches in America and around the world . stand. networks (Inspiration Network International, God TV The Church Channel) will broadcast the event at different , and viewed on our website at www.iwillnotforget.net. This is going to be an event that has a lasting the world. This special program developed for the Friends of Zion Heritage Center, telling the story of the horrors of the Holocaust who stood as lights in the darkness.

In addition, we are delighted to Israeli , Shimon Peres, a . message from Nobel , Dr. Elie Wiesel, Israel’s Prime Minister Benjamin Netanyahu. This is going to be such a powerful event, and we plans right now to be part of it.

When I , over and over people came up and told me how much it meant to them to know that Christian friends were standing with them. It is impossible to fully put into words the sense of isolation that the . They know that their enemies are all around them and that many of counted on. They face constant . moment, anyone living in Israel terrorist of anything they have done but where they live.

, makes the need for our support . The news of this event will electrify the Jewish world. The sad truth is that the Church has been largely silent about the great evils of the past…and about the great evils of the present. We can change that, but we can’t do it without the help of friends of Israel around the world. We encourage you to join us for this special Holocaust Remembrance Day event and add your voice to Believers around the world who will be standing to declare: “I Will Not Forget!”

For more information about the event, church or small group can join , you can visit us online at www.iwillnotforget.net. , and there is no offering or event.

Dr. Mike widely , having 4,000 the Kremlin Moscow to the World Summit on Terror in Jerusalem. He has spoken at countless Middle East Summits, conferences, perspectives on the Scriptures, prophecy, the Middle Christian faith are widely valued . 3,000 churches worldwide.

As one who frequents the Middle East, Mike Evans has met with hundreds of Israeli government officials over the years and he works to connect with local leaders, prime ministers and ambassadors alike. He has re-ceived Israel’s highest gift, the Ambassador Award.