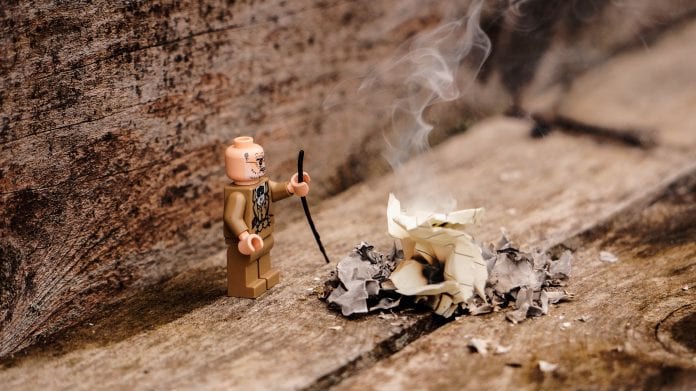 A breakfast burrito and a cup of coffee from a drive-thru. This morning is already revving up. I’ve got several appointments scheduled and pressing deadlines.

Sometimes it feels like there’s simply not enough time in the day. But, if you’re a pastor, you already know what that’s like. After all, you’re in the trenches!

I’ve been a minister for 25 years and, like you, I wear several hats. These include being a husband, dad, marching band volunteer, preacher, college professor, pastoral counselor, and author, among others. It can get tricky.

And I live my life by the book—my day-timer that is! Trying to cram so many things into 24 hours can seem overwhelming at times. My ministry calendar (like yours, I imagine) is chocked-full. God’s grace alone sustains me. And I’m not just saying that to sound sanctimonious. I really mean it!

But there’s something you need to know. I’ve got an embarrassing confession to make.

On October 31st, 2013—Halloween—I had a wake-up call, and not one of those that come at 6 AM via your hotel room telephone. This was a rude awakening.

Weeks before I began noticing that I was experiencing tightness in my chest and discomfort. Like a stereotypical stubborn male, I dismissed these symptoms. But, of course, they persisted. My body was trying to tell me something, but I was ignoring its warning signals.

The more responsibilities and bookings that piled up, the worse I felt. There was a direct correlation. Something had to give – and quickly. Burnout was staring me in the face. I should have recognized the red flags, but I didn’t. Hindsight is 20/20.

I seemed to remain in a constant state of physical, emotional and spiritual exhaustion. My patience threshold was also unraveling at home and work. The writing was on the wall.

After several weeks of chest pain, I finally told my wife. She freaked out. “Ryan, please make an appointment with the doctor right away! I’m worried about you.” So I did. My physician referred me to another clinic for more thorough testing, just to play it safe. I headed straight there.

“What had started out as a relatively peaceful morning morphed into sheer chaos.”

At the clinic, I told the receptionist about my symptoms and was immediately ushered back to an examination room. That’s when things really kicked into high gear.

I could sense the urgency in the medical personnel’s conduct. Off went my shirt and on went the EKG sensors. After reading the printout, the nurse practitioner said, “Swallow this nitro and this aspirin! I’ve called the ambulance. You’re headed to the ER!”

“Uh, what?! You’re kidding me right?”“No. This looks very serious.”

If I hadn’t been overly anxious to this point, things changed immediately as panic settled in. My body temperature spiked, my head spun, and my palms became clammy.

I fumbled with my iPhone as I tried to dial my wife’s number more than once, but to no avail. So I called my parents and asked them to get word to Missy. Things went into slow motion.

What had started out as a relatively peaceful morning morphed into sheer chaos. EMTs loaded me onto a gurney and wheeled me out to the ambulance in the rain. One of them stuck an IV needle in my forearm while the other kept a watchful eye on my vitals. I was sweating profusely by now and hyperventilating.

The race to the hospital was unnerving with the sirens blared. I was praying hard — trying to remain cool, calm and collected. But several terrifying scenarios were running through my head.

We arrived at the hospital and they rushed me to a room. Moments later,
my wife burst through the door with tears streaming down her cheeks. She was scared to death. “Ryan, I don’t want to lose you,” she cried.

To cut a long story short: after a big scare, the cardiac tests all came back negative. Phew! I had dodged a bullet. But medical explanations weren’t forthcoming. It was frustrating. Nonetheless, I was released that evening on bed-rest.

Things could have been far worse, but this certainly got my attention. I was forced to do some serious soul searching and came to the conclusion that my symptoms were stress-related.

The ironic thing was that I was already scheduled to lead a large “group therapy” session at a ministers’ retreat five days later on the topic of “How to Avoid Burnout in Ministry.” I wasn’t sure if I was going to be able to honor the speaking engagement. Ultimately, I felt compelled to go. Did I ever have a gripping story to tell the participants about what NOT to do!

Since then, things have improved dramatically for me as I have taken proactive self-care steps. I’ve learned to pace myself better, to say “No”
more often. And I’ve been reminded that I’m not invincible and have definite limits to my time, energy and emotional resources.

I often tell my counseling students, “There’s only one Savior, and I am not He.” Then I have them repeat it after me several times.

As ministers, our bodies, minds and spirits can only handle so much exertion before they will start screaming at us. We must learn to heed their warnings!

Symptoms of burnout in ministry may include the following: exhaustion and other physical symptoms (like muscle aches, headaches, neck and back discomfort), heightened impatience, increased reactivity, unwarranted agitation, cynicism, depression, amplified fear and anxiety, susceptibility to sexual sin and pornography, overeating, lethargy, procrastination, and compassion fatigue.

Are you teetering on the edge of disaster? Have you entered the ministerial danger zone for burnout?

Remember that ministers who are impaired often do damage to those they are supposed to serve, as well as to their own families and loved ones. It’s serious business!

To avoid burnout in ministry, here are twelve practical strategies:

Ask someone you trust to hold you accountable in maintaining a realistic schedule.

Exercise regularly and eat a balanced diet to improve your physical health and stamina.

Get adequate rest and relaxation.Attend to your own personal spiritual nurturance and growth.

Invest yourself deeply in your family relationships and friendships.Make time regularly to get away from it all and re-create.

Learn to say “No” more often rather than piling on more and more responsibilities.

Take weekends off periodically from your usual pastoral duties.

Refer troubled parishioners to other professionals as needed, rather than attempting to provide pastoral care to each of them.

Remember you can’t fix other people or their problems; that job belongs solely to God.

Foster meaningful relationships with fellow ministers who can understand your pastoral challenges and struggles, as well as provide support and encouragement.

Here’s one final thought to consider: You’re not indispensable. That’s right! Spiritual pride can seduce ministers into believing that God or the church can’t survive without them. It’s a dangerous trap.

Dr. Ryan Fraser is the preacher for Bethel Springs Church of Christ. He also serves as a counseling professor at Freed-Hardeman University in Henderson, TN. As a Christian author, he is represented by Hartline Literary Agency. You may check out his website at www.ryanfraser.org. Read more of his writings on his ministry blog: www.ryannoelfraser.blogspot.com. Follow him on Twitter: www.twitter.com/ryannoelfraser. Also like him on Facebook: www.facebook.com/hisheartmyhands.