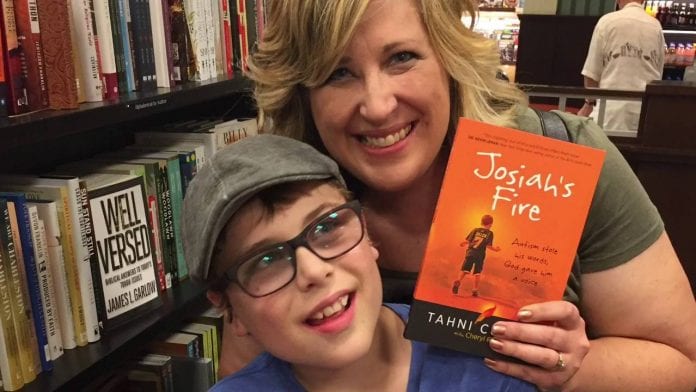 As excited first-time parents, my husband, Joe, and I were determined to try to do all the right things to set up our little family to succeed. We bought our first house. I read all the recommended mommy books and subscribed to three parenting magazines. We were ready. We had a solid marriage, solid jobs, solid friends, and a solid faith. Life made sense.

We brought our little bundle of love, Josiah, home on a brisk fall October day in 2005. We adjusted to the normal bumpy first months of infancy armed with information and a healthy dose of grace. I admit, I’m a recovering achiever-type. Show me the best pathway to proper child development and household peace, and I’m on it. Josiah was thriving and on track with his pediatric milestones, and life was good.

But, then, something switched. When Josiah was 22-months-old, we entered into the most disorienting season of our lives. Suddenly, Josiah stopped responding to his name. He began to stare off, disconnected from the people around him. He became obsessed with spinning wheels and turning the light switch on and off. His sleep became erratic. He was losing his words. This didn’t make sense. What was happening to him?

A few months later, Joe and I sat in a boardroom after a two-day battery of testing to hear the doctors’ full report delivered to us. It simply confirmed what we already knew. But on that day, it felt like an official sentence was passed with the downward swing of an unseen gavel.

Autism Spectrum Disorder. This was followed by the statement, “No known cause, no known cure, lifelong.” As a mommy and a Christ-follower, the question that loudly pounded in my aching heart was, Where is hope when there is no hope? I scooped up my Josiah and stared at his beautiful face framed with curly blond hair, but looking ahead, I only saw loss upon loss and uncertainties on every side.

Still, we’re certainly not the type to be faced with a challenge without giving it absolutely everything we had to help our son. The medical field might not have had much to offer us, but if there was a way past these limitations, we were going to find it! We threw ourselves into research, put Josiah in the best full-time therapy school for autism that we could find, and tried every alternative medical treatment that made sense. And we prayed hard. Still, after Josiah passed his fifth birthday, we were faced with an even more difficult addendum to his autism label: nonverbal and low-functioning.

I’d call from across the room the name to which he no longer reacted: “Josiah!” It was a thoughtfully chosen name. It meant “fire of the Lord.” Why, then, did it seem his pilot light had gone out?

I came to identify with the pain felt by the desperate parents in the Bible. You wonder where God is and why things aren’t working out. Sarah, Hanna, Mary, Jairus—I have cried your same tears, felt your same fears, and tasted some of the same disappointments. I have wondered if the God I have been serving all of my life really saw what was happening. Could I really trust Him with my son? When the solutions evaded us, who else could I turn to?

One September night in 2012, something dramatically switched again. For several months I had been doing lessons with almost-seven-year-old Josiah using a method that taught kids to spell as they pointed at letters. I’d been making slow, incremental progress—until that moment.

While reading to Josiah from The Children’s Bible about how Jesus healed the blind man, I waited for him to spell the word “heal” on the big alphabetical buttons of his iPad. Instead he typed something different, and my mouth dropped open: “God is a good gift giver.”

His first independent sentence! Where had it even come from? Until this point, he had only communicated through pictures and simple one-word spellings. I thought I was on Candid Camera or had lost it for a moment. This didn’t make logical sense, but it was happening before my eyes. As the days moved on, “God is a good gift giver” became our life statement, and God began proving its truth to our family.

What started as a trickle became a river. One letter at a time while fighting with a body that didn’t want to be still, words poured off Josiah’s pointer finger and onto his iPad. Not only did he share with us normal thoughts, but he began to write beautiful quotes and poetry that captured my heart, drawing me closer to God. I watched Josiah become more confident and less frustrated. Joy and hope sprang up from dry wells. Dreams reemerged. With everything I witnessed daily, faith became more fun, charging me with expectancy.

I didn’t expect, however, the unfolding spiritual journey my son’s new communication would bring to my life and how it would change our family forever. I had been praying for God to heal Josiah—and I still do pray for the ever-present limitations of autism to be lifted from him—but somehow God’s solution to our pain has been playing out differently from what I had envisioned. Josiah sees and hears spiritual things and shares insights and wisdom flowing from the heart of God, Jesus, Holy Spirit and angels that he has never been taught.

As his mother, who also has worked in ministry at church, you can imagine how guarded I was to share such audacious news. This is an unlikely and theologically box-breaking miracle and I wasn’t sure how it would be received, especially by church folk. It doesn’t make sense to my logical brain, but I can’t be silent anymore–not when my speechless son is loudly voicing God’s goodness in the one way he knows how, and will fight everyday against the limits of his brain and body to do it.

Some of my favorite quotes Josiah has typed about faith are as follows:

“Faith is believing for kites to fly when there’s no wind in sight.”

It just doesn’t make sense that a kid—a nonverbal, low-functioning, severely autistic kid—could type these, and even far more revelatory, things. The Bible does say, however, “God chooses the simple things of the world to confound the wise.” Jesus also said, “Whoever takes the lowly position of a child is the greatest in the kingdom of heaven… For I tell you that their angels in heaven always see the face of my Father in heaven” (Matthew 18:4,10).

I’m a parent who has sought after all the wisdom the world has to offer in order to raise my child to be successful in this life. God had to intervene to show me that He is the giver of every good and perfect gift. He is a Father who sees us and our families, and despite the painful circumstances we face that make no sense to us, He has not changed His position toward caring for us on this earth. God is a good gift giver! He’s also a surprisingly good gap filler.

Tahni Cullen is the co-author with Cheryl Ricker of Josiah’s Fire: Autism Stole His Words, God Gave Him a Voice,and with her husband produced the award-winning documentary “Surprised By Autism.”

ORDER YOUR COPY ON AMAZON TODAY.First-time parents Joe and Tahni Cullen were thrust into the confusing world of autism when their toddler, Josiah, suddenly lost his ability to speak, play, and socialize. The diagnosis: Autism Spectrum Disorder. Five years later, Josiah, who had not been formally taught to read or write, suddenly began to type on his iPad profound paragraphs about God, science, history, business, music, strangers, and heaven. Josiah’s eye-opening visions, heavenly encounters, and supernatural experiences forced his family out of their comfort zone and predictable theology, catapulting them into a mind-blowing love-encounter with Jesus.Follow a trail of truth into Josiah’s mysterious world, and see why his family and friends can no longer stay silent.