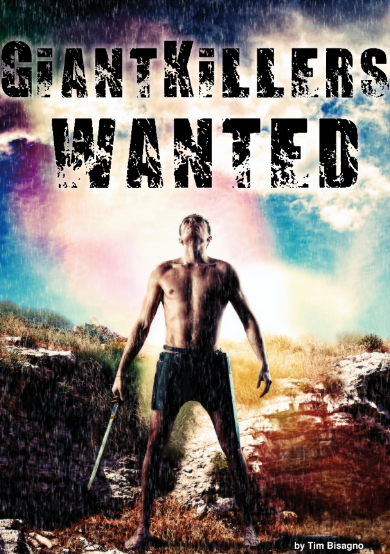 Saul pleaded. God spoke. David . I believe surprised, even shocked, that no one else was standing under the “Giant Killers Wanted” sign.

, but accomplishment. First, David showed up. Then God showed off. How many times do we not see , were too afraid to show up

Ministry is full of problems. Many of them, big enough to send a guy packin’. Even a guy after God’s own heart. problem. Nobody . . But David wasn’t “nobody.” And neither are you.

Reality is, fifteen hundred pastors from all denominations. Only one graduation. Only one in ten men who begin in ministry at age 21 are still in it at 65

In 1962, Owner Branch Rickey Jackie Robinson Brooklyn Dodgers, African-American player in Major League Baseball. Both knew it would be rough. “Jackie,” Mr. Rickey said, “Can you take it when they call you the ‘n-word’, spit or throw garbage at you?” “Yes sir,” said Jackie, “God built me to last.”

God built us to last too. If you’re , ministry, thank you. I’m honored to be in your tribe.

Hello. I’ve decided to never leave the ministry. Ever.

“Ministry: the easiest, yet hardest job in the world.” As a kid, I heard my dad say it many times. Intuitively, I knew it was true. After years of unsuccessful draft dodging, it was clear; I couldn’t “not step” under the “Giant Killers Wanted” sign. To do anything else would be to wear Saul’s armor.

If “Giant Killers Wanted” sign, killin’ in your bones. Like it or not, you’re done. the ordinary.

Giant problems are real, and “real” can never be avoided. But, it can be prepared for. David got pretty bored watching sheep all day. God used David’s to prepare . Probably unbeknown to David, he was following God’s heart the day that he first picked up a slingshot and flung his first rock at a tree, learned guitar and wrote his first song. God’s calling card in David’s life to remind him;

, David risked it all, and we can too. Risk . But risk born from the throne room of boldness. faith. Enough faith to kill a giant.

27 ministry, David. David used what he had. He did a lot with a little. David was a great starter. He was also a great finisher. He life is unless there’s a point. The point is to serve God’s purposes in our generation. The best we can, for as long as we can.

. But, David was a great repent-er. After every problem David ever had, he kept reenlisting, always returning to stand under the sign. For David I ; coming back.

David had a problem that day. His Goliath. But, Goliath thing that ever happened to David faith. His Kingdom. ,

I like David. I like him a lot. David , thing. freedom to wear what fit. But for him, it wasn’t about the fight or the fit. It never was.

few for onslaught, David went to war. Of done, he went “total promoter” on everyone within earshot. Like the job of any good promoter, David drew attention to The Star. God. Within throwing distance of Dave’s , world, “This is not my battle, it’s the Lord’s. HE will deliver. Today the whole world will see – There is a One True God!”

David always looked at a problem little sweat on it. He came to promote God. So he did.

Promoting God is dangerous. But that someone else will promote if we don’t. What if David had done that? We’ll have many . There’s forward. Not only for but for us and those who come after us; the decision to go forward is always made in faith.

In God’s He chooses . In , , the message that there is “One True God” to show up and take a stand to the end. Acts 13:36 says, “David served God’s purposes in his own Generation.”

The “Giant Killers Wanted” sign is still up. In fact, it’s never been taken down

My father has three or four life-long friends. To my delight, and to their honor, they’ve each served God’s purpose in their Generation for over 60 years. Since I was a kid deep sense of satisfaction every time I see them together. But, my favorite moment is watching them from each other. Without fail, they give each other a wave, a hug, handshake or high-five, encouraging each other always with these parting words, “Stay in the battle!”

A sling and a stone was David’s weapon of choice. Mine is a bow . . is important and I love . . privilege to offer you a handful of my personally tested field points. I pray they find you, like David, always killing giants.

Let It Go: To finish well, forgiveness is our only option.

Walk Humbly: Humility is as basic to ministry as oxygen is to breathing. How can you not walk humbly?

Be Yourself: Again I say, “be yourself.”

Rest, Relax and Have Fun: My dad always says, “My least favorite people in the world are preachers that act like preachers.” My grandfather’s parting words after 60 years of ministry, “don’t forget to have fun.” – Excellent advice.

Function in Your Gifts: Do what comes naturally. Don’t be afraid to make a change if necessary.

Enjoy a Hobby: For the sake of The Kingdom, please enjoy a hobby.

Be an Encourager: …And not just from the pulpit.

More field points can be found in the book Wisdom for Life by my dad, John Bisagno. I honor him for 61 years of full-time, faithful, . has affected millions. None more deeply than I.

No matter your battle, the “Giant Killers Wanted” . By , I to meeting you under that sign. When we do meet, let’s celebrate His goodness together with a wave, hug, handshake or high-five grouped with the parting words, “Stay in the battle.”

From one hopeful giant killer to another, your new friend,

Tim Bisagno grew up in Houston, TX as the son of a prominent pastor. He took the traditional path of acquiring a classic ministry-education, but his heart was not in it. Struggling, Tim unsuccessfully used drugs and alcohol to quit his call to ministry. Instead, Tim discovered his desperate need for God. Through this sobering experience, he not only grew in knowing Jesus, but also developed a deep desire to make Him known. He has since served from youth pastor, musician’ary to 40 countries, to senior pastoring. Tim founded the Dove award winning TV show, MXTV, in 1997, where he continues to currently serve full-time. Creatively rePresenting God’s Word to the world, MXTV’s passion is that this media generation will encounter God, resulting in their salvation.