The artifact, less than 1 inch in length and width, and known as a curse tablet, may spur renewed debate on the dating of biblical events, especially those told in the Book of Exodus. This curse tablet was discovered by Mount Ebal, which is near the Palestinian city of Nablus. Photo by Michael C. LuddeniMarch 26, 2022By Jerry PattengaleShareTweetShare

(RNS) — An ancient tablet discovered near the Palestinian city of Nablus may contain the earliest known mention of God’s name in proto-alphabetic Hebrew.

Scott Stripling, director of the Archaeological Studies Institute at The Bible Seminary in Katy, Texas, announced the discovery of the lead tablet Thursday (March 24).

He said it could push back the written record of the name “Yahweh” a couple of centuries earlier, to at least 1200 B.C. and perhaps as early as 1400 B.C.

The finding may also spur renewed debate on the dating of biblical events, especially those told in the Book of Exodus. A peer-reviewed article is in process.

The artifact, less than 1 inch in length and width and known as a curse tablet, also recalls the account of Joshua building an altar nearby, which Israeli archaeologist Adam Zertal excavated in the 1980s.

The curse tablet was discovered near Mount Ebal, also called the Mount of the Curse in the books of Deuteronomy and Joshua. Stripling found it in a dump site, part of the structure Zertal identified as Joshua’s altar. Stripling said the finding was a confirmation of the biblical account.

In recent years, Stripling also announced the discovery of a Tabernacle platform during his ongoing excavations at biblical Shiloh. 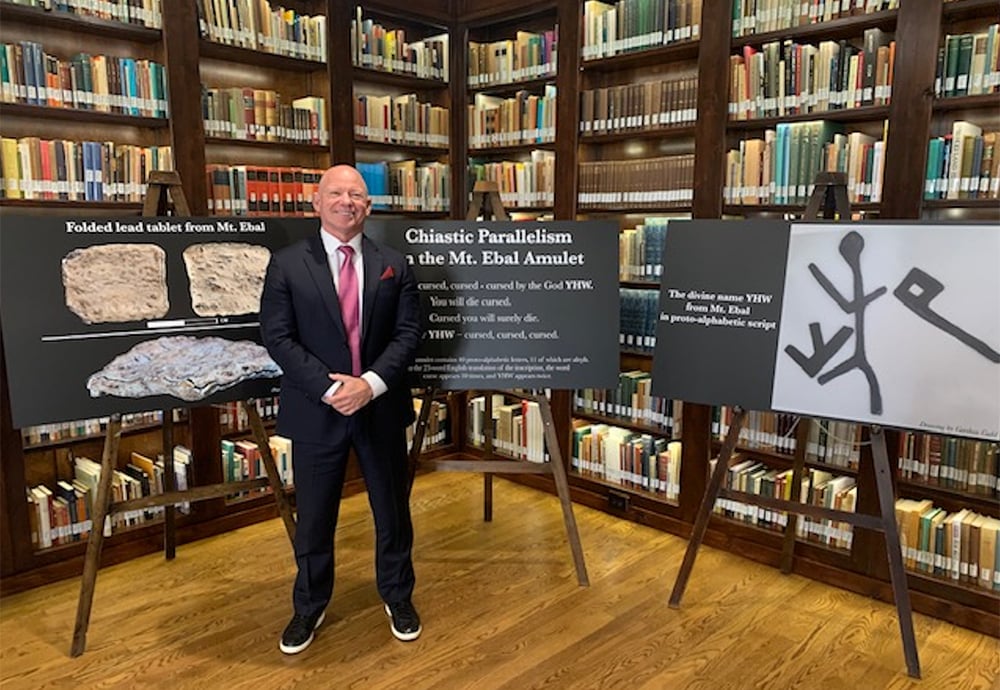 But the 2-centimeter-square (.78-inch) amulet may be the signature discovery of a lifetime. Professor Gershon Galil of the University of Haifa said this type of discovery is made only once a millennia.

Galil deciphered the hidden internal text with another paleographer, Pieter Gert van der Veen of the Johannes Gutenberg-Universität Mainz. A release from the Associates for Biblical Research press said they employed advanced tomographic scans to recover the hidden text.

Stripling was joined by Museum of the Bible CEO Harry Hargrave, who noted, “This little artifact helpsus understand better the history, story, and impact of the Bible — all within one square inch.”

Gabriel Barkay had helped Stripling learn the wet-sifting technique in Jerusalem’s Temple Mount. Barkay made the remarkable discovery in 1979 of the Ketef Hinnom scrolls, which contain the earliest biblical text discovered (circa seventh century B.C.).

“Our discovery of a Late Bronze Age inscription stunned me,” Stripling said.

The dirt around the area of the discovery was discarded over 30 years ago. It had been dry-sifted before Stripling’s decision to run it through again using the wet-sifting technique.