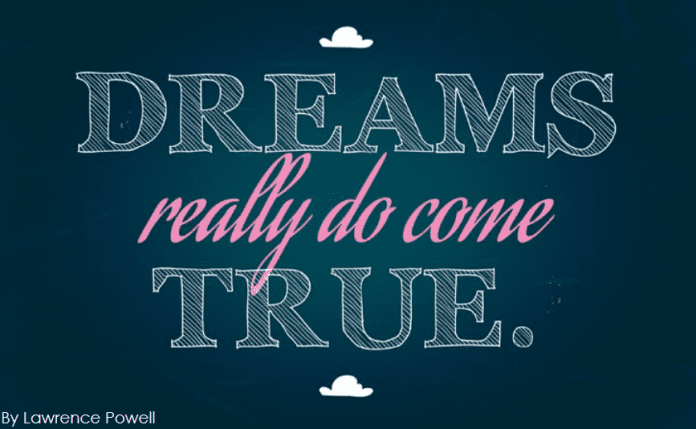 As a child of God, you can expect to have dreams and visions. I don’t care how old you are. God has you here on this planet for a reason, and it’s time you start speaking to the greatness inside of you, to the potential that is yet to be released. It’s time to begin pulling it out and giving it expression. Remember Joel 2:28? It was prophesied then that God would pour out His Spirit on all flesh. “Your sons and your daughters shall prophesy, your old men shall dream dreams, your young men shall see visions.” Peter, by the unction of the Holy Spirit, announced on the Day of Pentecost that we are living in the time of fulfillment of that scripture — he said the Spirit was being poured out, that we would begin having dreams and visions!

Never underestimate the power of dreams and visions. God speaks through them, revealing things to us that we would otherwise miss. Here are four types of dreams recorded around the time of Jesus’ birth that stood out to me:

Matthew 1:20 says, “But while [Joseph] thought about those things, and Angel of the Lord appeared to him in a dream, saying, ‘Joseph, son of David, do not be afraid to take unto you Mary as your wife, for that which is conceived in her is from the Holy Spirit.” This dream is what I call the Dream of Assurance. Imagine Joseph receiving the news that his bride-to-be is pregnant. Now imagine his emotional state: His world has just been turned upside down. But in the moment of his understandable despair, God gave him a Dream of Assurance. As a result, he went from despair to faith, and he took up the role as the earthly father of Jesus!

God will give us dreams that bring us assurance. He has shared with me on many occasions dreams that helped me identify with what He was doing. And He will do the same with you, and they will bring comfort and help so that you, too, can discover what He is doing in your life. Maybe you’re facing some challenges this year. Maybe you’re feeling shattered or rejected, due to prevailing circumstance in your life. Well, good news! Be encouraged! Just as God gave Joseph a dream, He will send you a Dream of Assurance to strengthen and encourage you!

In Matthew 2:12-13, we read, “Then, being divinely warned in a dream that they should not return to Herod, they departed for their own country another way. Now when they had departed, behold, an angel of the Lord appeared to Joseph in a dream, saying, ‘Arise, take the young child and his mother, flee to Egypt and stay there until I bring you word, for Herod will seek the young child to destroy him.’”

Sometimes God communicates with us through Dreams of Warning. But you’ve got to understand that there’s a dream language, that things in dreams may be symbolic: colors, persons, and occupations; if you’re on a plane or bus, in a car, house or bathtub. These dream images often represent entirely different things in the waking world. If you are going to do a Google search to try to figure out your dream, let me caution you to do a proper search for dream interpretations or symbols: type “Christian” in there, because there is a lot of New Age stuff on the internet, and that will take you somewhere you don’t need to go.

The Lord gave me a dream years ago. In it, I was in my parents’ home, and as I made my way through the kitchen toward the living room, I noticed a stranger sitting in the living room, as if he were at home in my house. There was eeriness about that character. Immediately I felt that I had to warn my mother and sister. I went back to the kitchen door and saw them coming up the sidewalk, so I warned them about the strange man in our house. When I awoke and shared the dream with my Mom, she told me she had had a similar dream about a stranger in the house. God was warning us, showing us a satanic attack that we had to pray against—and thank God, we got victory over it. Years later, my daughter had a Dream of Warning all her own. She said, “Daddy, I had a dream I was driving by the church. It was about midnight and the parking lot was packed. They were having a party at the church! I went to look, but, Daddy, it wasn’t like a church party; it was like a club party!” God had warned my daughter in a dream and when she shared that dream with me, immediately a passage of scripture came to mind in which the enemy was rejoicing, celebrating, having a party over the people of God…But I couldn’t remember the verse. That was on a Monday. By Friday, it dawned on me. It was the passage about David and Ziklag. When the Israelites got to where the enemy was camped, they found them eating, drinking, and celebrating, because the enemy thought they had the victory over the people of God. I explained to my daughter that her dream represented the devil’s way of thinking that he’s going to get the victory over God’s people. It was a warning to us to be on our guard against the wiles of the devil. That is why my daughter saw the ungodly party in the house of God. When God gives you a Dream of Warning, it might be that He is trying to re-route you, so pay attention to the voice of the Holy Spirit, amen?

When they got to Israel, they were led by dreams to Nazareth to fulfill the prophecy, “And He shall be called a Nazarene.” This kind of dream is a Dream of Guidance. God orders our steps. He will show you dreams and visions that signify where He is leading you. We all need guidance from the Lord, don’t we? Don’t insist upon doing things your own way. Please save yourself some heartache, some money, and some pain: Trust the Lord. The Bible says, “Acknowledge the Lord in all your ways.” He will give you dreams and visions as you face this new year. He will guide you into your destiny and His abundance, if you will let Him!

Dreams of the Miraculous

Another miracle happened around the time of Jesus’ birth: the announcement of the pregnancy of Elizabeth, who was barren and old, and the birth of John the Baptist (Luke 1). In this story, an angelic visitation leads to the birth of John. These scriptures show us Dreams and Visions of the Miraculous. So many people are in need of miracles today. Are you one of them? God reminds us through the birth of John – and more so the birth of the Lord Jesus Christ – that miracles do happen. Let us not forget that the birth of Jesus was a miraculous gift from God to the entire world. I want you to understand that: Jesus was not just a gift to you or to me; He was a miracle gift to the world. This signifies to us that God has miracles for every one of us, and I personally believe that He has a miracle for you this year! Ask big, expect big, and receive big, in Jesus’ name!

Lawrence Raphael Powell is the Senior Pastor of Agape Family Worship Center, in Rahway, New Jersey. With over 16 years in ministry, Pastor Lawrence is transforming lives with his powerful, prolific and practical presentation of the Gospel. Thousands of families from across the tri-state region flock to Agape every week, to experience warm fellowship, dynamic worship and anointed teaching. Through outreach, evangelism and multimedia broadcasting, Pastor Lawrence is bringing the Good News of Jesus Christ to people all over the world. To learn more, visit: lawrencepowell.net