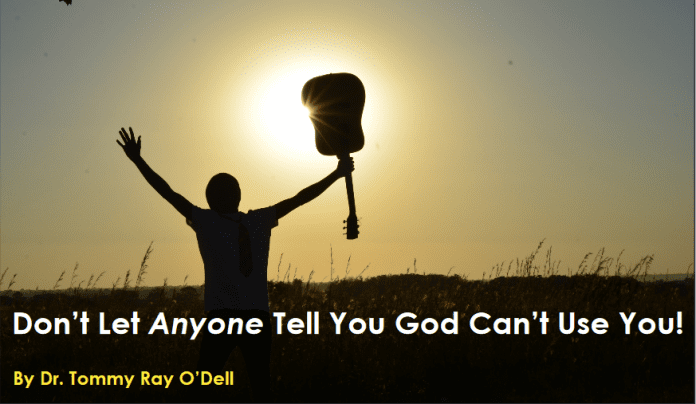 I was born in Tulsa, Oklahoma, the first grandson of the illustrious evangelist, T.L. Osborn. I grew up in that atmosphere, knowing about international crusades and powerful miracles. I had even heard the story about my grandfather seeing Jesus and how that transformed his young ministry, and it deeply impacted me. But somewhere I took a wrong path.

When I was sixteen years old, my life was virtually over. I was a drug addict with a burned-out mind from chemicals and hard drugs. I dropped out of school and ran away from home. I slept on the streets, wherever I passed out. Everybody gave up on me, even my family and friends. They all thought that I would die a drug addict. But Jesus never gave up on me. The seeds of the gospel that were planted in my heart by my wonderful grandparents made all the difference in the world.

The Bible says that the Word of God is like a seed. Sometimes we emphasis the power of demonic or satanic seeds, but there is nothing like the power, the efficacy, of God’s seed, His Word.The Bible says whosoever shall call upon the name of the Lord shall be delivered. I learned the truth of that word on May 8, 1981, the night I overdosed while with some friends. My body began to convulse so badly, they thought I was dying. These “friends” were afraid of getting stuck with a corpse and being asked some very uncomfortable questions by the police, so they stopped the car, pushed me out and drove away. There in the ditch, by the side of the road, I called out in the name Jesus. My whole prayer was simply, “Jesus, OK!” There was no way I could pray a more complicated or theologically correct prayer. I couldn’t say, “Heavenly Father, who dwells in the heavenlies of heavenlies, between the cherubim.” All I could say was, ”Jesus, OK,” but what I meant was “I repent, I surrender, I love You, I need You, I’m calling on You, Lord Jesus.”

Suddenly, the power of God went through my whole being. It started at the top of my head and burned down through my torso and extremities. In the deepest part of my being that fire burned. It wasn’t painful, but it was hot. It reminds me of the Old Testament account, when Moses saw the bush that was burning brightly with fire, but wasn’t consumed. It was a healing fire. And I could feel the Lord heal me, body, soul and spirit. I was transformed and I got up off the ground and began to weep. I raised up my fist and proclaimed, “I’m free, I’m free!” Then I told Satan, “You’ve lost your slave! Tommy O’Dell will never be your slave again!”

From that point on, I began to really seek God; I was filled with the spirit just a couple of days later. When I was filled with the Holy Ghost, it was so powerful that I thought I would go up to heaven if I didn’t hold onto something. I spoke in tongues for about a week and was hardly able to speak in English. I read the Scriptures; I saturated my spirit with the New Testament. I read all of my grandfather’s books, and he became such a powerful inspiration and encouragement to me. All of those things that I had learned as a boy, all the sermons I’d heard, all the scriptures I had read, and all the promises of God that were taught to me, came alive. Everything made sense, and nothing condemned me. Nothing made me afraid or weak; it only encouraged me. Like the Bible says, “You shall receive power after the Holy Ghost comes upon you, and you will be my witnesses to the uttermost parts of the Earth.”

So that’s what we’ve done. By “we,” I mean my wife and I. I met Elisabeth in Holland. I had wanted to go to Africa; I had such a fire in my heart for that continent, but I couldn’t afford to go. Then I was invited to be a part of a missions trip to Holland, so I went there instead. Holland was certainly closer to Africa than Oklahoma was. My first day in Holland, I met the woman who became my wife. We ended up getting married in Northern Ireland eight months later. We’ve been married 35 years, and we’ve preached the Gospel together the entire time, in over 85 nations to millions of people, face to face—massive crusades to the Buddhists, Hindus, Muslims and atheists. We started when we were only 18 years old, and since then we have seen millions come to Jesus. We went to people that nobody else would go to. The Lord taught us so much, during those years, because our Bible school was the mean streets of the world: Amsterdam, New York City, the Bronx and Paris. The Lord opened up the doors for us to preach the gospel in prisons and have huge crusades and concerts in overcrowded prisons throughout third world countries.

I want to encourage young people who might be reading this article: don’t let anyone tell you that God can’t use you. He used David when he was a youth to slay Goliath. He used Samuel when he was young to deliver his people from the foreign invaders. There was a girl named Mary who believed what the angel said to her and she humbly replied, “So be it according to me, according to thy word.” She believed and became the mother of our Messiah. All through the history of the Scriptures there are amazing stories of young people of faith who did mighty deeds. God wants you to be like that!

Tommy Ray O’Dell and his wife Elisabeth have conducted massive miracle crusades and concerts for more than 30 years, combining Rhythm & Blues with the Gospel message. Their ministry has reached millions in over 80 nations, including the unreached in the 10/40 window.