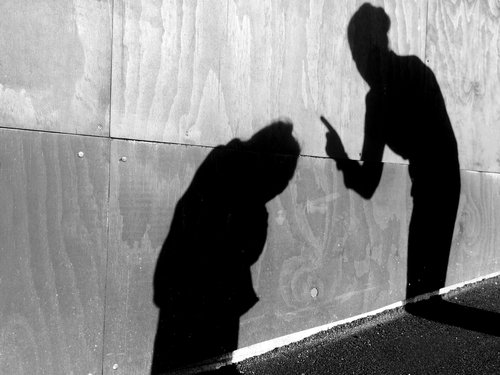 When parents avoid conflict with their teenager, they are avoiding some of the greatest teaching opportunities they will ever have.

Does anyone like conflict? No. It’s not a fun or enjoyable experience; however it is necessary, and if used properly, conflict can be a precursor to change. It’s very unlikely that a lasting change will come without at least some measure of conflict and struggle. As Ben Franklin put it, “The door to success swings on the hinges of opposition.”

Conflict usually turns ugly when it is met with reluctance, insensitivity, or immaturity by either party. It’s a given that our kids will act immature, so it is up to us parents to be mature and take the higher road.

Conflict in and of itself is not what produces change for the better, it is how we respond to it.

Conflict can be a force for good in families, but only if it is dealt with properly. The way we react can either deepen the relationship, or it can tear it down. Most kids simply want to know that they are being heard! Refusing to understand that, and shutting off any form of conflict, can build a wall between you.

Another way walls can build up is to belittle your teen’s thoughts and feelings. The issue may seem like a small or “black and white” matter to you, but it could be confusing and all-encompassing to them. Often when I’m working with a young person I’ll say something like, “I think I understand what you are saying, but let me try to repeat it so I am sure.” Then, I calmly repeat back what their issue and position is.

You cannot expect your teen to respect you or your rules if you don’t show respect to them.

It’s important to acknowledge your teen’s viewpoint even if you don’t agree with it. Their view may be short-sighted, self-focused, and just plain wrong, but it is still one that they are going to want to defend to the hilt. Your response to their “side” needs to be respectful rather than reactionary, understanding versus judgmental. Even so, if their position conflicts with your rules, and it’s an important matter of character or morality, you might say, “I understand now, but I don’t agree with your conclusion, so we’re not going to follow that path. But let’s keep talking about it so I can better understand why you feel this way.”

Change comes out of relationship. Failing to listen during conflict makes it difficult, if not impossible, for positive change to occur. More than almost anything else, I work constantly to keep the lines of communication open and to make sure relationships stay intact. If there is a smaller issue where I can give in without compromising something vital, I do, just so they know I am listening. I don’t want young people to feel that I’m constantly “shooting them down” or turning a deaf ear to their way of thinking. They need to know that their concerns are being heard, for if there is no hope of that, they will either become deceitful and just stop talking or try other tactics, such as raging or acting out their anger through their behavior.

Conflict presents a wonderful opportunity to reinforce your values and beliefs. All the things you have been teaching your child before are brought into focus through applying your values to real-life situations. They may not agree with it, but they can at least begin to connect the dots.

Conflict gives you a chance to get to know your child better. Sometimes during conflict, kids are more willing to open up and express themselves. Be sure you don’t close the door during conflict and allow them to say how they are feeling. They may blurt out things they don’t really mean or that could shock you, so don’t take offense. We’ve all said things we wish we could take back. Teens do this more often because they haven’t learned how to control their emotions. Try to understand the meaning behind the words and give grace to the actual words that are being said.

Conflict may show you a place where you are wrong. It’s a huge relationship builder to admit a mistake and to tell you child that you are changing your position because of what they said. This will show them you value them as an independent individual. If you’re wrong, own up to it. If you’re right, don’t cave in just to keep the peace.

Conflict is a crucial preparation for your teen in dealing with future conflict. The skills for dealing with conflict that your teen learns from you will be needed throughout their lives. The adult world is going to require them to resolve issues and conflicts with others, so you need to be sure you are giving them the tools they will need. And one day they will have kids too, so you can show them the way to positive conflict.

Keep in mind that all of the positives of conflict break down when disrespect creeps in from either party. Name calling, screaming, or slamming doors are all acts that your child (and you) should have nothing to do with. When they happen, the discussion needs to be put on hold until cooler heads prevail. That way, the teen knows they won’t get their way just by being angry or disrespectful. In fact, they end up shooting themselves in the foot because they lose the chance to make their case – at least until they can calm down. But, be SURE to come back to it and discuss it later that day. Don’t let conflicts fester too long or they will eventually explode.

The Don’ts of Conflict

1. Don’t allow the crisis at hand to spill over and contaminate the rest of the relationship. It’s easy for the conflict to take over every conversation. Be willing to press the pause button—not to overlook or ignore the problem, but to have time to take a break and re-establish connections over a meal or shared moments that have nothing to do with the conflict at hand.

2. Don’t lose the “concept of we” in middle of the conflict. The relationship that you have been building with your child will bear fruit over time as long as you protect it. The conflict can challenge us as parents, but we need to approach it as an opportunity rather than as a sign of failure on our part. Don’t allow it to create a permanent breach in your relationship.

3. Don’t let conflicts build up—deal with them when they happen. A problem that you overlook doesn’t just go away; it becomes a building block in a wall that can grow and prevent both you and your child from properly responding to future conflicts. Each one that you address and resolve provides training for future conflicts.

The bottom line of dealing with any conflict is that there are root causes for every behavior. Don’t lose that perspective in the heat of the battle. The symptoms of conflict are not the problem; so you can’t resolve the problem by dealing with the symptoms. Keep the lines of communication open and the relationship strong, and you’ll successfully resolve any conflict that arises in your family. Properly responding starts with faith. You have to believe that God is big enough to “work all things together for good” as Romans 8:28 tells us…and that He will use the situation to ultimately make things better.

Mark Gregston is an author, speaker, radio host, and the founder and director of Heartlight, a residential program for struggling adolescents located in East Texas. Call 903-668-2173. Visit www.heartlightministries.org, or to read other articles by Mark, visit www.markgregston.com.