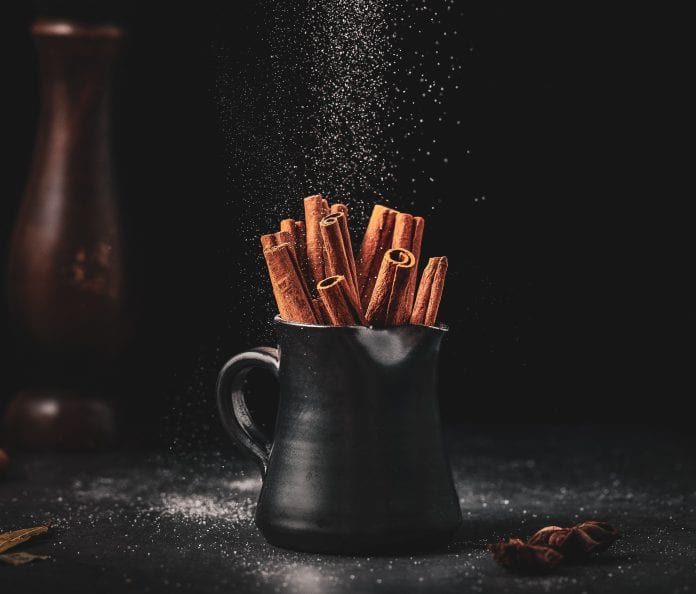 Naturally sweet and delightfully aromatic, cinnamon is a wonderful fat resistance food just waiting for you in the spice rack. Mulled apple cider simmering on your stove with a stick of cinnamon is the ultimate aromatherapy for your home. And cinnamon is tough enough to go it alone, without added sugar.

Yes, this spice can add delicious flavor and amazing health benefits when sprinkled on your favorite dishes or on new creations. Turn an ordinary dish or drink into a healthy comfort food.

Research indicates that powdered cinnamon, about a half teaspoon a day, may help prevent diabetes or reduce blood sugar in adults who have diabetes. One study found that cinnamon helped reduce levels of cholesterol and triglycerides in people with type 2 diabetes. With these potential benefits, it’s no wonder cinnamon is a hot topic in health news.

Do something good for yourself and enjoy cinnamon sprinkled on healthy dishes any time of day.

Breakfast
Have a little cinnamon with your oatmeal, granola, cereal, or yogurt in the morning.

Snack
Place some apple slices into a small bowl and shower them with cinnamon. Add a few walnuts, and you’ve got a delicious treat with pectin fiber and healthy omega-3 fats. Or try mixing some cinnamon into applesauce; it tastes a lot like apple pie without the crust!

Coffee or Tea
You might sprinkle cinnamon on that latte or cappuccino when you are out. Why not do the same when you have coffee or tea with milk at home?

Dinner and Dessert
For the adventurous cook, a dash of cinnamon works beautifully with vegetarian spiced dishes such as curries or masalas.

For dessert, how about a baked apple with cinnamon?  Here’s the recipe from our book The Fat Resistance Diet.

Baked Apple with Cinnamon and Walnuts

Imagine walking into a kitchen filled with the rich aroma of cinnamon and apples baking in the oven. This is comfort food at its best. The sweetness of soft, warm apples is enhanced by pomegranate syrup, and the walnuts are crunchy and satisfying.

Core the apples and place in a baking dish. Pour the pomegranate juice over apples. This will become syrup when cooked.

Sprinkle with cinnamon and bake in a toaster oven or oven at 350° Fahrenheit for 30 minutes or until apples are soft. Baste apple with syrup while cooking.

Plate the apple and top with walnuts and syrup. Serves two.

This article is provided for general educational purposes only and is not intended to constitute medical advice or counseling, the practice of medicine or the provision of health care diagnosis or treatment, the creation of a physician-patient relationship, or an endorsement, recommendation, or sponsorship of any third party product or service by the sender or the sender’s affiliates, agents, employees, or service providers. If you have or suspect that you have a medical problem, contact your doctor promptly.